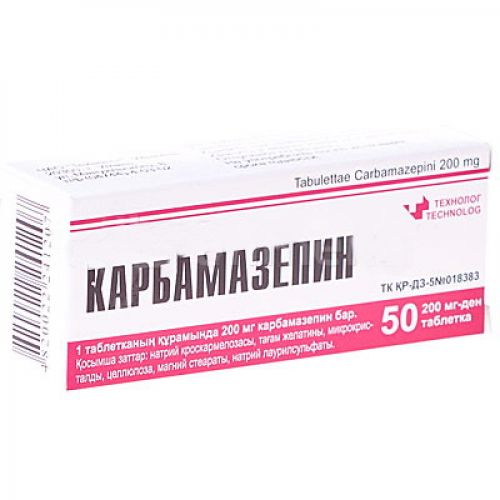 Carbamazepine is relatively slowly released from the tablet after entering the stomach. The active substance in unchanged form reaches peak plasma concentrations 4-24 hours after administration in a single dose. The therapeutic concentration of carbamazepine in plasma is 5-12 μg / ml. 70 – 80% of carbamazepine binds to plasma proteins. The degree of bioavailability is 70-95%. The half-life of unchanged carbamazepine is 26-65 hours, with prolonged use, due to autoinduction of microsomal liver enzymes, it decreases to 16-24 hours. Biotransformed in the liver. The main metabolite is 10,11-epoxide, which has an antiepileptic effect. Excreted in urine (72%) and feces (23%). Passes through the placental and blood-brain barriers, penetrates into breast milk. The metabolism of carbamazepine is reduced in the elderly and in children.

Monitoring the level of carbamazepine should be carried out in the presence of side effects, pregnancy and its simultaneous use with other anticonvulsants and drugs of concomitant therapy.

Carbamazepine is an antiepileptic drug. It has a moderate antimanic, antidepressant and analgesic effect. In epilepsy, along with the positive dynamics of paroxysms, carbamazepine improves the emotional state and increases the sociability of patients with personality changes, which contributes to their social rehabilitation. Prevents or significantly reduces the frequency of epileptic seizures, leads to the normalization of the EEG.

The mechanism of the anticonvulsant action of carbamazepine is associated with limiting the spread of excitation from certain areas of the cerebral cortex, with a decrease in post-tetanic potentiation in the spinal cord, with a decrease in the speed of conduction along the motor and sensory nerves, as well as with a non-specific membrane-stabilizing effect.

– prevention of seizures during withdrawal syndrome in patients with chronic alcoholism

Carbamazepine is taken orally with meals. Adults for the treatment of epilepsy at the beginning of the course are prescribed 200 mg 1-2 times a day, elderly patients – 100 mg (1/2 tablet) 1-2 times a day. Further, the dose is gradually increased to 400 mg 2-3 times a day until the optimal daily dose is reached in the range of 800-1200 mg.

The following dosage regimen is recommended:

In the treatment of neuralgia of various etiologies and pain syndromes, carbamazepine is taken in a daily dose, which is 200-400 mg, which is divided into 2-3 doses. The dose is gradually increased until the pain disappears and is prescribed 200 mg 3-4 times a day for 7-10 days. Further, after the patient’s condition improves, the dose is gradually reduced to a maintenance (minimum effective), which is taken for a long time.

With withdrawal syndrome, the average dose of carbamazepine is 200 mg 3 times a day. In severe cases, during the first few days, the dose can be increased to 400 mg 3 times a day and carbamazepine can be combined with sedative-hypnotic drugs (clomethiazole, chlordiazepoxide). After the weakening of the acute form, it is possible to continue treatment with carbamazepine, as the main therapeutic agent, until the pain syndrome disappears.

– influence on the parameters of thyroid function (triiodothyronine, thyroxine, thyroid-stimulating hormone and free thyroxine), especially when combined with other antiepileptic drugs

– hyponatremia (due to the antidiuretic action of Carbamazepine)

– clouding of the lens

– a decrease in the level of calcium in the blood serum, in isolated cases this leads to osteomalacia

– proteinuria, hematuria, oliguria, dysuria, pollakiuria (these disorders are due to the drug’s own antidiuretic effect).

– the occurrence of various forms of hepatitis (cholestatic, hepatocellular-

– gynecomastia in men, galactorrhea in women

– concomitant use of lithium preparations

concomitant use of voriconazole

– hypersensitivity to the active and auxiliary

– severe dysfunction of the heart, liver and kidneys

With the simultaneous use of carbamazepine with anticonvulsants such as phenytoin, phenobarbital and primidone, there is a decrease in their concentration in the blood serum.

Carbamazepine should not be co-administered with lithium preparations.

Carbamazepine reduces the half-life of phenytoin.

Carbamazepine leads to a decrease in the half-life of doxycycline, and therefore doxycycline must be administered at 12-hour intervals.

Co-administration with warfarin leads to a decrease in the concentration of the latter in the blood plasma and a decrease in its half-life.

Carbamazepine, when used together with paracetamol, increases the risk of its toxic effects on the liver and reduces therapeutic efficacy (acceleration of the metabolism of paracetamol).

The simultaneous administration of carbamazepine with phenothiazine, pimozide, thioxanthenes, molindone, haloperidol, maprotiline, clozapine and tricyclic antidepressants leads to an increase in the inhibitory effect on the central nervous system and a weakening of the anticonvulsant effect of carbamazepine.

MAO inhibitors increase the risk of developing hyperpyretic crises, hypertensive crises, seizures, death (before prescribing carbamazepine, MAO inhibitors should be canceled at least 2 weeks in advance or, if the clinical situation allows, even longer).

Weakens the effects of non-depolarizing muscle relaxants (pancuronium bromide). In the case of the use of such a combination, it may be necessary to increase the dose of muscle relaxants, while careful monitoring of patients is necessary, since their effect may be stopped more quickly).

Accelerates the metabolism of drugs for general anesthesia (enflurane, halothane) with an increased risk of hepatotoxic effects; enhances the formation of nephrotoxic metabolites of methoxyflurane.

Enhances the hepatotoxic effect of isoniazid.

Myelotoxic drugs increase the manifestations of hematotoxicity of the drug.

Due to the possible occurrence of side effects, as well as hypersensitivity reactions to the drug, it is recommended (especially with prolonged use) to periodically conduct blood tests and check the function of the liver and kidneys. This is done at the beginning of treatment, then in the first month of treatment 1 time per week, and after that – 1 time per month. After the first 6 months of treatment, these controls are done 2-4 times a year.

It is also necessary to regularly monitor the concentration of carbamazepine and other antiepileptic drugs in blood plasma during combination therapy and, if necessary, reduce daily doses.

While taking carbamazepine, agranulocytosis and aplastic anemia may develop. However, due to the fact that such conditions occur very rarely, it is difficult to calculate specific risk values ​​for them.

In cases where during treatment there is a low level of the number of leukocytes or platelets (or there is a tendency to decrease them), you need to carefully monitor the patient’s condition and the indicators of a detailed clinical blood test. If there are signs of significant bone marrow suppression, the drug should be discontinued.

Carbamazepine should be discontinued immediately if signs and symptoms are observed that indicate the development of severe dermatological reactions – for example, Stevens-Jones syndrome or Lyell’s syndrome.

Carbamazepine has weak cholinergic activity. Therefore, in the case of using the drug for the treatment of patients with elevated intraocular pressure, constant monitoring of this indicator is necessary.

Termination of treatment with carbamazepine in patients with epilepsy and their transfer to another antiepileptic drug is not carried out suddenly, but gradually, reducing its dose.

Since carbamazepine can provoke new or exacerbate existing special forms of seizures (so-called absences), it is not recommended to prescribe it to patients suffering from these forms of seizures.

Only after carefully comparing the risk of therapy and the expected beneficial effect, as well as with appropriate precautions, carbamazepine can be used for diseases of the hematopoietic organs (hematological diseases), severe disorders of the heart, liver and kidneys, impaired sodium metabolism.

In patients with glaucoma, intraocular pressure is regularly monitored.

It should be borne in mind that the side effects of carbamazepine may be similar to the withdrawal symptoms in alcoholism and can easily be confused with them.

If, in exceptional cases, for the prevention of manic-depressive phases with insufficient effectiveness of lithium alone, carbamazepine should be administered together with it, therefore, in order to avoid unwanted interactions, it is necessary to ensure that a certain concentration of carbamazepine in blood plasma (8 μg / ml) is not exceeded, the content of lithium was maintained in the low therapeutic range (0.3-0.8 meq/L), antipsychotic treatment was given more than 8 weeks ago, and also ensured that it was not done concurrently.

During pregnancy, carbamazepine is used only after careful comparison of the risk of therapy and the expected beneficial effect. In pre-existing pregnancies, especially between the 20th and 40th day of pregnancy, carbamazepine is prescribed at the lowest dose that controls seizures. The daily dose, especially during the most sensitive period of pregnancy, is divided into several small doses, which are taken throughout the day. It is recommended to control the level of the active substance in the blood serum.

When using carbamazepine, fetal malformations (congenital spina bifida) may occur, and therefore women of childbearing age are recommended to use contraceptives during treatment with the drug.

In connection with the enzyme-inducing properties of carbamazepine, it may be advisable to prescribe folic acid before and during pregnancy.

In order to avoid hemorrhagic complications in the newborn, prophylactic administration of vitamin K1 to the mother in the last weeks of pregnancy or to the newborn immediately after birth is recommended.

Carbamazepine in therapeutic doses in a nursing mother does not pose a danger to the child.

During treatment with the drug, you should refrain from driving a car and engaging in potentially hazardous activities.

Symptoms: the occurrence of tremors, seizures that occur when the brain is excited (tonic-clonic convulsions), agitation, as well as impaired breathing and functions of the cardiovascular system with often low (sometimes also high) blood pressure, increased heart rate (tachycardia) and conduction disorders (atrioventricular blockade, ECG changes); disorders of consciousness up to respiratory and cardiac arrest.

In isolated cases, there may be leukocytosis, leukopenia, neutropenia, glucosuria or acetonuria.

Treatment – There is no specific antidote for the treatment of acute carbamazepine poisoning. Treatment is symptomatic in a hospital setting.

Store at a temperature not exceeding 25 0C.
Keep out of the reach of children!
Shelf life – 3 years
Do not use after the expiry date stated on the packaging.