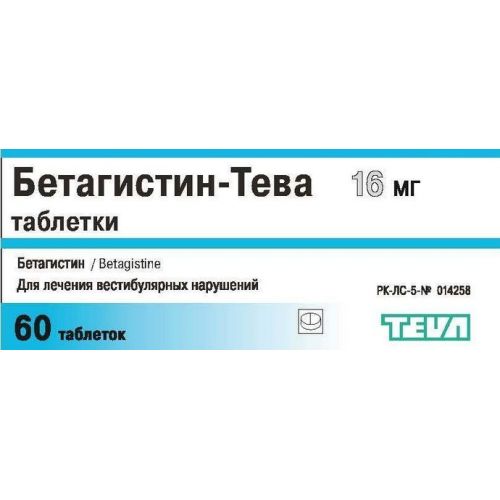 Betahistine hydrochloride is a synthetic analogue of histamine. It acts on histamine H1 and H3 receptors of the inner ear and vestibular nuclei of the central nervous system. Improves microcirculation and capillary permeability of the inner ear, increases blood flow in the basilar arteries, normalizes endolymph pressure in the labyrinth and cochlea.

The recommended starting dose is 24 mg per day (or 16 mg twice daily) by mouth during or after meals. The daily dose may be increased to 48 mg.

A stable therapeutic effect occurs after two weeks of treatment. The best results are observed after several months of treatment.

– palpitations, tightness in the region of the heart

– gastrointestinal disorders: nausea, vomiting, heartburn, pain in the epigastric region, flatulence (these symptoms will be less pronounced if you take the drug with meals or reduce the dosage)

– in patients with urticaria, rash or allergic rhinitis

The metabolism of betahistine is inhibited by monoamine oxidase (MAO) inhibitory drugs, including subtype B (eg, selegiline). Since betahistine hydrochloride is a histamine analogue, the simultaneous use of H1 antagonists can cause a mutual weakening of the effect of active agents.

Caution should be exercised when prescribing the drug in patients with peptic ulcer (including history), as dyspepsia may develop. When taking betahistine, the symptoms of hives, rash, allergic rhinitis may worsen.

Due to the side effect in the form of drowsiness, it is possible to reduce the ability to drive a car and control machines.

Store at a temperature not exceeding 25ºС.
Keep out of the reach of children!
Shelf life – 3 years
Do not use after the expiration date.