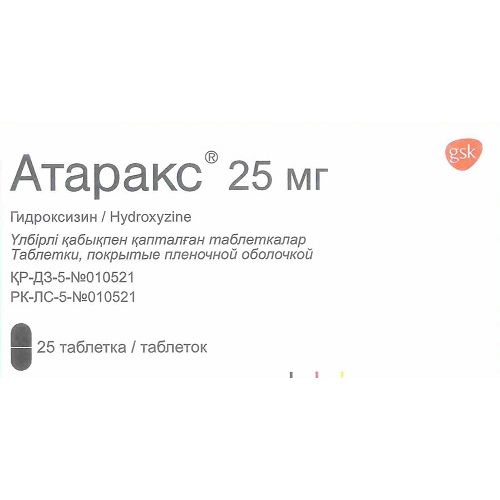 active agent of Hydroxyzinum a hydrochloride of 25 mg,

White oblong tablets, film coated, with cross risky for a break on both sides.

Pharmacokinetics Quickly properties is soaked up from digestive tract. Time of achievement of the maximum concentration (Cmax) after oral administration of 2 h. After reception of a single dose of 25 mg of Cmax at adults makes 30 ng/ml and 70 ng/ml after reception of 50 mg of Hydroxyzinum. The bioavailability at intake is 80%.

Hydroxyzinum concentrates in skin more, than in blood plasma. The distribution coefficient makes 7-16 l/kg at adults. Hydroxyzinum gets through a blood-brain barrier and a placenta, concentrating more in fruit fabrics, than in maternal fabrics. Hydroxyzinum is metabolized in a liver. Metabolites are found in breast milk. Tsetirizin the main metabolite (45%), is the expressed H1 blocker. The general clearance is 13 ml/min. Only 0.8% of Hydroxyzinum are removed in not changed look through kidneys. At children the general clearance is 4 times shorter, than at adults, children have an Elimination half-life (T1/2) of 11 hours at the age of 14 years and 4 hours at the age of 1 year, at adults the elimination half-life makes 14 h.

At patients with liver diseases the elimination half-life increases till 37 o’clock owing to what it is necessary to lower a day dose or frequency of reception.

Hydroxyzinum well gets through hematoencephalic a barrier, has high affinity to histamine receptors of a brain, communicating with which provides sedative and anxiolytic effect.

Antihistaminic and bronkhodilatiruyushchy action was shown experimentally and confirmed clinically. The antiemetic effect is shown on tests with use of an apormorfin and veriloid.

Pharmacological and clinical trials showed that Hydroxyzinum in therapeutic doses does not increase gastric secretion or acidity and in most cases shows soft anti-secretory activity. Hydroxyzinum also confirmed the efficiency in simplification of an itching in urticaria, eczema or dermatitis.

Antihistaminic action begins approximately in 1 hour at use inside. Sedation begins in 30-45 minutes after reception of tablets.

Against the background of intake of Ataraxum the lengthening of duration of a dream, decrease in frequency of night awakenings after reception once or repeatedly Hydroxyzinum in a dose of 50 mg is observed. Decrease in muscular tension is noted at administration of drug in a dose 50 mg 3 times a day.

Does not cause mental dependence and accustoming. At long reception the withdrawal and deterioration in cognitive functions is noted.

– symptomatic treatment of alarm at adults

– relief of symptoms of a skin itching of allergic origin

– for the purpose of premedication

the Single maximum dose should not exceed 200 mg (8 tablets), the maximum daily dose makes no more than 300 mg (12 tablets).

Relief of symptoms of a skin itching

the Initial dose of 25 mg for the night, if necessary can be increased up to 25 mg three or four times a day.

The dosage and duration of reception is defined by the attending physician.

From 50 to 200 mg/days in 1 or 2 receptions, single dose in 1 hour prior to surgical intervention to which 1 reception for the night before anesthesia can precede.

One tablet can be divided into two parts after risk and medicine is taken in stages depending on the weight of the child and strictly on doctor’s orders. The appointed dosage is recommended to be crushed and diluted with clear water.

Relief of symptoms of a skin itching

For premedication before surgical intervention

Single dose in a dose of 1 mg/kg in 1 hour prior to surgical intervention to which reception can precede 1 mg/kg for the night before anesthesia.

the Dosage has to be adapted in the recommended range of doses, depending on reaction of the patient to treatment.

to Elderly people, it is recommended to begin with a half of the recommended dose in connection with the prolonged action.

Patients with a renal failure

the Dosage has to be reduced at patients with a moderate or heavy renal failure due to reduction of discharge of a metabolite of a tsetirizin.

Patients with a liver failure

the Patients with an abnormal liver function are recommended to reduce a daily dose by 33%.

– excitement, confusion of consciousness, a tremor, an indisposition

– dryness in a mouth

– disturbance of functions of a liver

Disturbance hepatitis from a cardiovascular system

– lengthening of an interval of QT on the ECG

the General disorders, damages of skin and hypodermic cellulose

– an asthenia, an indisposition

At use of the recommended doses of clinically significant respiratory depression was not observed.

The side reactions described at use of a tsetirizin, main metabolite of Hydroxyzinum are possible at Hydroxyzinum use

– hypersensitivity to Hydroxyzinum or any of drug components, to a tsetirizin or other derivatives of piperazin, Aminophyllinum or ethylene diamine in the anamnesis

– the patients suffering from a porphyria

– patients with lengthening of an interval of QT

It is necessary to consider exponential effect of the drug Ataraxum at joint appointment with the medicines oppressing the central nervous system such as narcotic analgetics, barbiturates, tranquilizers, sleeping medicines, anticholinergic drugs. In this case their dosages have to be selected individually.

In order to avoid influence on results of analyses, treatment it has to be stopped at least in 5 days prior to conducting allergy tests or the inhalation provocative test with metasincaline.

It is necessary to avoid joint appointment with monoaminooxidase inhibitors.

Drug interferes with vasoconstrictive effect of adrenaline and anticonvulsant activity of Phenytoinum.

As Hydroxyzinum is metabolized in a liver by the system of alcohol dehydrogenase and CYP3A4/5, at combined use of Hydroxyzinum with other drugs known as powerful inhibitors of enzymes of a liver, it is possible to expect increase in concentration of Hydroxyzinum in blood.

Combined use of Hydroxyzinum with potentially aritmogenny drugs can increase risk of lengthening of an interval of QT and developing of bidirectional ventricular tachycardia.

As Ataraxum possesses anticholinergic action, it is necessary to appoint it with care at a generalized myasthenia, urination difficulty, constipations, increase in intraocular pressure, dementia, tendency to convulsive attacks, arrhythmias, simultaneous use of the medicines possessing aritmogenny action.

Elderly patients are recommended to begin use with a half of the recommended dose at the expense of the prolonged action. The dosage has to be reduced by the patient with an abnormal liver function and to patients with a moderate or heavy renal failure.

In need of carrying out allergological tests the intake of Ataraxum has to be stopped in 5 days prior to a research, in a type of formation of its main metabolite of Tsetirizin having antihistaminic effect.

The patients accepting Ataraxum should abstain from alcohol intake.

Tablets contain lactose. Patients with rare hereditary problems of intolerance of a galactose, deficit of Lapp of lactase or malabsorption of a glyukozo-galactose should not accept this medicine.

Features of influence of medicine on ability to run the vehicle or potentially dangerous mechanisms.

The patients accepting Ataraxum have to be warned that drug can affect concentration of attention and speed of psychomotor reactions.

Symptoms: the overdoses observed later, are generally connected with excessive anticholinergic loading, oppression of central nervous system or paradoxical stimulation of central nervous system. They include nausea, vomiting, tachycardia, temperature increase, drowsiness, disturbance of pupillary reflexes, a tremor, confusion of consciousness or a hallucination. It can be followed by a depression of various level of consciousness, respiratory depression, spasms, hypotonia, or cardiac arrhythmia. There can come deepening of a coma and cardiorespiratory collapse. There has to be stringent control of breath and blood circulation with continuous record ECG and adequate supply with oxygen. Monitoring of heart and arterial blood pressure have to continue within 24 hours after disappearance of symptoms of a disease. Patients with the changed mental status have to be checked for a concomitant use of other drugs or alcohol, in case of need to use Naloxonum, glucose, thiamine.

Noradrenaline or metaraminol should be used if vazopressor are necessary. Adrenaline should not be used.

Treatment: Gastric lavage with a preliminary intubation of a trachea can be carried out if clinically significant reception did not happen. Activated carbon can be left in a stomach, but there are poor data confirming its efficiency. It is doubtful that the hemodialysis or hemoperfusion can have effect. There is no specific antidote.

On 25 tablets place in blister strip packaging from a film of polyvinylchloride and aluminum foil. 1 planimetric packing together with the instruction for medical use in the state and Russian languages is put in a cardboard box.

To Store storage conditions in the dry place at a temperature not over 25C.

not to take the drug after expiry date!

of the YuSB manufacturing organization of Pharma S.A.,