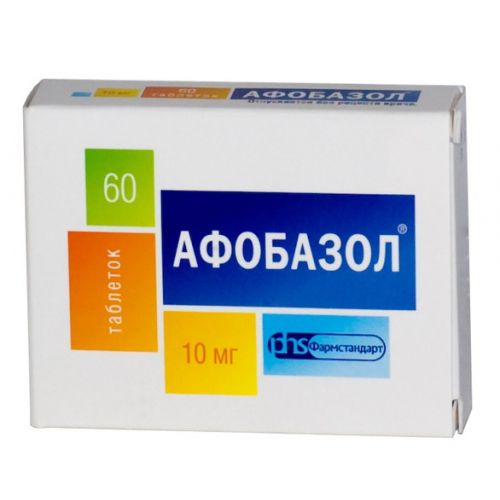 Tablets 10 mg. 20 tablets in a blister strip packaging.
3 contour packages together with instructions for medical use in the state and Russian languages ​​are placed in a carton box.

Tablets of white or white color with a creamy shade, flat-cylindrical shape with a bevel.

Tablets 10 mg. 20 tablets in a blister strip packaging.
3 contour packages together with instructions for medical use in the state and Russian languages ​​are placed in a carton box.

Symptoms: with a significant overdose and intoxication, a sedative effect and increased drowsiness may develop without manifestations of muscle relaxation.
Treatment: caffeine sodium benzoate 20% solution in ampoules of 1.0 ml 2-3 times a day subcutaneously is used as an emergency.

Afobazol® is a 2-mercaptobenzimidazole derivative, a selective anxiolytic that does not belong to the class of benzodiazepine receptor agonists. Prevents the development of membrane-dependent changes in the GABA receptor.
Afobazol® has an anxiolytic effect with an activating component that is not accompanied by hypnosedative effects (the sedative effect is detected in Afobazol® in doses 40-50 times higher than the ED50 for anxiolytic action). The drug has no muscle relaxant properties, a negative effect on memory and attention indicators. With its use, drug dependence is not formed and withdrawal syndrome does not develop.
The action of the drug is realized mainly in the form of a combination of anxiolytic (anti-anxiety) and mild stimulating (activating) effects. Reduction or elimination of anxiety (concern, bad feelings, apprehension, irritability), tension (fearfulness, tearfulness, anxiety, inability to relax, insomnia, fear), and therefore somatic (muscle, sensory, cardiovascular, respiratory, gastrointestinal symptoms ), vegetative (dry mouth, sweating, dizziness), cognitive (difficulty concentrating, impaired memory) disorders are observed on days 5-7 of treatment with Afobazol®. The maximum effect is achieved by the end of 4 weeks of treatment and remains in the post-treatment period, on average 1-2 weeks. The use of the drug is especially shown in persons with predominantly asthenic personality traits in the form of anxious suspiciousness, uncertainty, increased vulnerability and emotional lability, a tendency to emotional stress reactions. Afobazol® is non-toxic.

Afobazol® does not affect the narcotic effect of ethanol and the hypnotic effect of thiopental. It potentiates the anticonvulsant effect of carbamazepine. It increases the anxiolytic effect of diazepam.

The drug does not cause addiction, addiction, withdrawal syndrome. The peculiarities of the use of the drug Afobazol® in the elderly have not been identified.
Features of the effect of the drug on the ability to drive a vehicle or potentially dangerous mechanisms
The question of the possibility of driving vehicles and controlling potentially dangerous mechanisms should be resolved after assessing the patient’s individual response to the drug.

After oral administration, Afobazol is well and quickly absorbed from the gastrointestinal tract. The maximum concentration of the drug in plasma (Cmax) is 0.130 + 0.073 μg / ml; time to reach maximum concentration (TCmax) – 0.85 0.13 h.
Afobazole undergoes the “first pass effect” through the liver, the main directions of metabolism are hydroxylation at the aromatic ring of the benzimidazole ring and oxidation at the morpholine fragment. Afobazole is intensively distributed over well-vascularized organs; it is characterized by rapid transfer from the central pool (blood plasma) to the peripheral (highly vascularized organs and tissues). The half-life of Afobazol when taken orally is 0.82 + 0.54 hours. The short half-life is due to the intensive biotransformation of the drug and the rapid distribution from blood plasma to organs and tissues.
The drug is excreted mainly in the form of metabolites and partially unchanged in the urine and feces. With prolonged administration, it does not accumulate in the body.