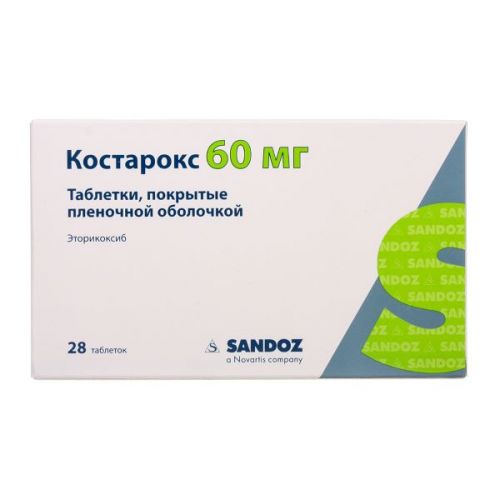 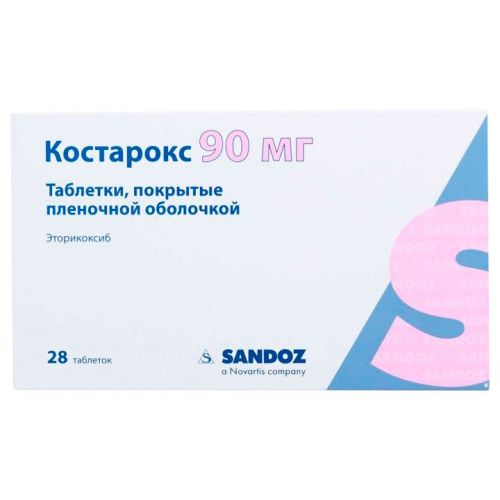 Suction. Etoricoxib is well absorbed when taken orally. Absolute bioavailability is about 100%. Following administration of 120 mg once daily until steady state, peak plasma concentrations (geometric mean Cmax = 3.6 μg/mL) were observed approximately 1 hour (Tmax) after ingestion in fasting adults. The geometric mean AUC0-24h was 37.8 μg h/mL. Within the range of clinical doses, the pharmacokinetics of etoricoxib is linear.
When taking etoricoxib at a dose of 120 mg with a meal (meal with a high fat content), there was no clinically significant effect on the extent of absorption. The absorption rate changed, which was characterized by a decrease in concentration (Cmax) by 36% and an increase in time (Tmax) by 2 hours, although these data are not considered clinically significant. In clinical studies, etoricoxib was administered with or without food.
Distribution. Etoricoxib is 92% bound to human plasma proteins over a concentration range of 0.05 µg/mL to 5 µg/mL. In humans, the volume of distribution at steady state (Vdss) is about 120 liters.
Etoricoxib crosses the placental barrier in rats and rabbits and also crosses the blood-brain barrier in rats.
Metabolism. Etoricoxib is extensively metabolized; less than 1% of the dose is excreted in the urine as the parent active substance. The main metabolic pathway is the formation of the 6-hydroxymethyletoricoxib derivative when catalyzed by cytochrome P450 (CYP) enzymes. CYP3A4 promotes the metabolism of etoricoxib in vivo. In vitro studies indicate that CYP2D6, CYP2C9, CYP1A2, and CYP2C19 may also catalyze the main metabolic pathway, but their quantitative characteristics have not been studied in vivo.
In humans, 5 metabolites have been identified. The main metabolite is 6′-carboxylic acid, a derivative of etoricoxib, formed by further oxidation of the 6′-hydroxymethyl derivative. These major metabolites, as inhibitors of cyclooxygenase-2 (COX-2), do not show measurable activity, or are only weakly active inhibitors. None of these metabolites inhibits cyclooxygenase-1 (COX-1).
Withdrawal. After a single intravenous injection of 25 mg radiolabeled etoricoxib, 70% of the radioactive etoricoxib is excreted in the urine and 20% in the feces, mainly as metabolites. Less than 2% is found as unchanged active substance.
Excretion of etoricoxib occurs mainly through metabolism, followed by excretion through the kidneys. Steady-state concentrations of etoricoxib are achieved within 7 days at 120 mg once daily, with an accumulation rate of about 2, corresponding to a half-life of about 22 hours. Plasma clearance after intravenous administration of etoricoxib at a dose of 25 mg is about 50 ml / min.
Separate groups of patients
Elderly age. Pharmacokinetics in elderly patients (over 65 years of age) is similar to that in younger patients.
Floor. The pharmacokinetics of etoricoxib is similar in women and men.
Impaired liver function. In patients with mild hepatic impairment (Child-Pugh score 5-6), when using etoricoxib at a dose of 60 mg once a day, the average AUC is approximately 16% higher than in healthy individuals with the same dose of etoricoxib. In patients with moderate hepatic impairment (Child-Pugh score 7-9), when using etoricoxib 60 mg once every other day, the mean AUC was similar to that in patients taking etoricoxib 60 mg once a day. day; etoricoxib 30 mg has not been studied in this group of patients. There are no clinical or pharmacokinetic data in patients with severe forms of hepatic impairment (≥10 points on the Child-Pugh scale).
Impaired kidney function. The pharmacokinetics of a single dose of etoricoxib 120 mg in patients with moderate to severe renal impairment, as well as in patients with end-stage kidney disease undergoing hemodialysis, did not differ significantly from that in healthy people. Hemodialysis has little effect on the excretion of etoricoxib (dialysis clearance is about 50 ml/min).
Children. The pharmacokinetics of etoricoxib have not been studied in children under 12 years of age.
In a pharmacokinetic study (n=16) conducted in adolescents aged 12-17 years, pharmacokinetics in adolescents weighing 40-60 kg when taking etoricoxib at a dose of 60 mg once a day and in adolescents weighing more than 60 kg when taking etoricoxib at a dose of 90 mg once a day was similar to the pharmacokinetics in adults taking etoricoxib at a dose of 90 mg once a day. The safety and efficacy of etoricoxib in children have not been established.

Mechanism of action. The drug Costarox® contains the active substance etoricoxib. Oral etoricoxib is a selective COX-2 inhibitor when used within the clinical dose range.
In clinical pharmacology studies, etoricoxib inhibited COX-2 in a dose-dependent manner without COX-1 inhibition at doses up to 150 mg per day. Etoricoxib does not inhibit the synthesis of gastric prostaglandins and does not affect platelet function.
Cyclooxygenase is responsible for the formation of prostaglandins. Two isoforms of COX-1 and COX-2 have been identified. COX-2 is an isoform of an enzyme that is induced by anti-inflammatory impulses and is considered to be the main factor responsible for the synthesis of prostanoid mediators of pain, inflammation, and fever. COX-2 is also involved in the processes of ovulation, implantation and closure of the arterial duct, regulation of kidney and central nervous system function (induction of fever, pain sensation, cognitive function); also, may be involved in the healing process of ulcers. COX-2 has been identified in tissue around human gastric ulcers, but significance for ulcer healing has not been established.

Symptoms. The use of etoricoxib in single doses up to 500 mg or multiple doses up to 150 mg/day for 21 days did not cause significant toxic effects. Acute overdosage with etoricoxib has been reported, although no side effects have been reported in most cases. The most frequently observed adverse events were consistent with the safety profile of etoricoxib (eg, gastrointestinal adverse events, renovascular reactions).
Treatment. In case of overdose, it is advisable to apply the usual supportive measures, such as removal of unabsorbed etoricoxib from the gastrointestinal tract, clinical observation, and, if necessary, to carry out maintenance therapy.
Etoricoxib is not removed by hemodialysis; elimination of etoricoxib during peritoneal dialysis is unknown.

Store at a temperature not exceeding 25°C.
Keep out of the reach of children!
Shelf life 3 years
Do not use after the expiration date.

Be the first to review “Kostarox® (Etoricoxib)” Cancel reply