the Trade name of Arcoxia®

Tablets of a yablokovidny form, biconvex, film coated green color, with stamping of ARCOXIA 60 on one party, and with stamping 200 on other party.

Tablets of a yablokovidny form, biconvex, film coated white color, with stamping of ARCOXIA 90 on one party, and with stamping 202 on other party.

Tablets of a yablokovidny form, biconvex, film coated light green color, with stamping of ARCOXIA 120 on one party, and with stamping 204 on other party.

Pharmacokinetics Quickly properties is soaked up at intake. The bioavailability at intake is about 100%. At use of drug for adults on an empty stomach in a dose of 120 mg the maximum concentration (Cmax) – 3.6 mkg/ml, time of achievement of the maximum concentration (TCmax) in blood plasma – 1 h after reception. Average geometrical AUC0-24ch made 37.8 mkg x h/ml. The pharmacokinetics of an etorikoksib within therapeutic doses has linear character.

Meal has no significant effect on expressiveness and speed of absorption of an etorikoksib in a dose of 120 mg. At the same time, there is a decrease in Cmax values by 36% and increase in TCmax at 2 h.

Communication with proteins of plasma at administration of drug exceeds 92%. The volume of distribution (Vdss) in an equilibrium state is about 120 l. The Etorikoksib gets through a placental and blood-brain barrier.

6-hydroxymethyl-etorikoksiba is intensively metabolized in a liver, with participation of an isoenzyme of P450(CYP) cytochrome and education.

Through kidneys 70% of drug are removed, 20% – through intestines, mainly in the form of metabolites. Less than 2% are revealed in not changed look.

Equilibrium concentration of drug is reached at daily reception of 120 mg of drug in 7 days, with cumulation coefficient about 2 that there correspond to elimination half-life about 22 h. The plasma clearance is about 50 ml/min.

At patients with insignificant abnormal liver functions (5-6 points on Child-Pugh scale) single dose of an etorikoksib in a dose of 60 mg/days was followed by increase by 16% of an indicator of AUC in comparison with healthy faces.

The patients with a moderate abnormal liver function (7-9 points on Child-Pugh scale) taking the drug in a dose of 60 mg every other day had the same AUC value, as at the healthy faces taking the drug daily in the same dose.

Data of clinical and pharmacokinetic trials at patients with a heavy abnormal liver function (more than 9 points on Child-Pugh scale) are absent.

In comparative pharmacokinetic researches comparable data at use of an etorikoksib in group of teenagers (from 12 to 17 years) are obtained with a body weight of 40-60 kg in a dose of 60 mg/days, in a similar age group and weighing more than 60 kg – 90 mg/days, and also adults at reception have 90 mg/days.

of Arcoxia® is selection TsOG-2 inhibitor, in therapeutic concentration blocks formation of prostaglandins and possesses anti-inflammatory, analgeziruyushchy and febrifugal action. Selection oppression of TsOG-2 the drug Arcoxia® is followed by reduction of expressiveness of the clinical symptoms connected with inflammatory process, at the same time is absent influence on function of thrombocytes and a mucous membrane of digestive tract. Аркоксиа® has dose-dependent effect of inhibition of TsOG-2, without influencing TsOG-1 at use of a daily dose up to 150 mg. Drug does not affect production of prostaglandins in a mucous membrane of a stomach and a bleeding time. In the conducted researches the decrease in level of the arachidonic acid and aggregation of thrombocytes caused by collagen was not observed.

Inside, irrespective of meal, washing down the Route of administration and doses with a small amount of water.

the Recommended dose makes 60 mg once a day.

A pseudorheumatism and an ankylosing spondylitis

the Recommended dose makes 90 mg once a day.

the dose Recommended in an acute period makes 120 mg once a day.

It is necessary to use a minimal effective dose minimum possible short course.

The average therapeutic dose at a pain syndrome makes once 60 mg a day.

pain, a meteorism, an abdominal distension, strengthening of a vermicular movement, a constipation,

– gastritis, an ulcer of a mucous membrane of a stomach or a

12-perstny gut, a syndrome of the angry intestines, an esophagitis, ulcers

of a mucous membrane of an oral cavity

sleep disorders, disturbance of sensitivity, including.

– heartbeat, increase in the ABP, feeling of inflows

– ecchymomas, puffiness of the person, a skin itching, rash

increase in activity of a kreatinfosfokinaza, decrease in a hematocrit,

decrease in hemoglobin, a hyperpotassemia, a leukopenia, thrombocytopenia,

– a gastroenteritis, ulcers of the digestive tract (DT) with bleeding

– a renal failure, is usually reversible at drug withdrawal

– anaphylactic/anaphylactoid reactions, including the profound

lowering of arterial pressure and shock

– infections of an urinary path

– increase in sodium in

– a full or incomplete combination of bronchial asthma,

the nose recuring a polypose or near-nasal bosoms and intolerance

of acetylsalicylic acid and other NPVP

– erosive and ulcer changes mucous a stomach or a 12-perstny gut,

active gastrointestinal bleeding, cerebrovascular or other

ulcer colitis) in an aggravation phase

– hemophilia and other disturbances of blood clotting

– the profound liver failure (more than 9 points on

Child-Pugh scale) or an active disease of a liver

– the profound renal failure (clearance of creatinine less than 30

ml/min.), the progressing diseases of kidneys, the confirmed

– the period after performing aortocoronary shunting, a disease

– with firmness the remaining values of arterial blood pressure exceeding

– children’s and teenage age up to 16 years

At the patients receiving warfarin, reception of Arkoksii® in a dose of 120 mg a day was followed by increase approximately for 13% of the International Normalized Relation (INR) of a prothrombin time. At the patients receiving warfarin or similar medicines it is necessary to control MNO indicators during the beginning or change of treatment of Arkoksiey®, in particular in the first few days.

Are available messages that non-selective NPVP and selection TsOG-2 inhibitors can weaken hypotensive effect of APF inhibitors. This interaction should be taken into account at treatment of the patients accepting Arkoksiya along with APF inhibitors. At patients with renal failures (for example, in dehydration or at advanced age) the similar combination can aggravate functional insufficiency of kidneys.

Cyclosporine and takrolimus increase risk of development of nephrotoxicity at administration of drug.

there Are data that non-selective NPVP and selection TsOG-2 inhibitors can increase concentration of lithium in plasma. This interaction should be taken into account at treatment of the patients accepting Arkoksiyu® along with lithium.

At co-administration of Arkoksii® in doses is higher than 90 mg in day and a methotrexate it is necessary to observe possible emergence of toxic effects of a methotrexate.

Reception of Arkoksii® in a dose of 120 mg with the oral contraceptives containing 35 mkg of ethinylestradiol (EE) and from 0.5 to 1 mg of norethindrone within 21 days, at the same time or with a difference increases at 12 o’clock stationary AUC0-24hr for EE by 50-60%. However, concentration of Norethisteronum usually does not increase to clinically significant degree. This increase in concentration of EE should be taken into account when choosing the corresponding oral contraceptive for simultaneous use with Arkoksiey®. The similar fact can lead to increase in frequency of tromboemboliya, due to increase in exposure of EE.

Significant pharmacokinetic interaction with glucocorticosteroids is not revealed.

Etorikoksib does not influence equilibrium AUC0-24ch or elimination of digoxin.

At the same time, etorikoksib increases Cmax (on average by 33%) that can matter at digoxin overdose development.

– the powerful inductor of hepatic metabolism – leads the Concomitant use of Arkoksii® and rifampicin to decrease by 65% of AUC for an etorikoksib in plasma. This interaction should be considered at co-administration of Arkoksii® with rifampicin.

Antacids and ketokonazol (powerful CYP3A4 inhibitor) have no clinically significant effect on pharmacokinetics of Arkoksii®.

Also it is regularly necessary to control indicators of function of a liver and kidneys.

In case of increase in level of hepatic transaminases by 3 times and more, rather upper bound of norm, drug has to be cancelled.

Considering increase of risk of development of undesirable effects with increase in duration of reception, it is necessary to estimate periodically need of continuation of administration of drug and a possibility of a dose decline.

It is not necessary to use drug along with other NPVP.

The cover of the drug Arkoksii® contains lactose in insignificant quantity that should be considered when prescribing drug the patient with a lactose intolerance.

Anamnestic data on development of a canker of a GIT, presence of an infection of Helicobacter pylori, advanced age, long use of NPVP, frequent alcohol intake, heavy somatopathies, dislipidemiya / a lipidemia, diabetes, arterial hypertension, hypostases and a delay of liquid, smoking, clearance of creatinine less than 60 ml/min., the accompanying therapy by the following drugs:

At patients with a liver failure (5-9 points on Child-Pugh scale) are recommended be not to exceeded a daily dose of 60 mg.

Use of drug can negatively affect female fertility and is not recommended to the women planning pregnancy.

The feature of influence of medicine on ability to run

during treatment needs to be careful during the driving of motor transport and occupation other potentially dangerous types of activity demanding the increased concentration of attention and speed of psychomotor reactions. Patients at whom episodes of dizzinesses were noted, of drowsiness or weakness, due to refrain from the occupations demanding concentration of attention.

Symptoms: at overdose of drug the emergence of undesirable effects from a GIT is possible, a cardiovascular system and kidneys.

Treatment: symptomatic therapy. The Etorikoksib is not removed at a hemodialysis, removal of drug at peritoneal dialysis was not studied.

of the Tablet, film coated 60 mg, 90 mg, 120 mg. On 7 or 14 tablets in blister strip packaging from a film of PVC and aluminum foil. On 1, 2 or 4 packs together with the instruction for medical use in a cardboard pack.

To Store storage conditions at a temperature not above +30 °C.

the Producer Merck Sharp and B.V. Doum, the Netherlands 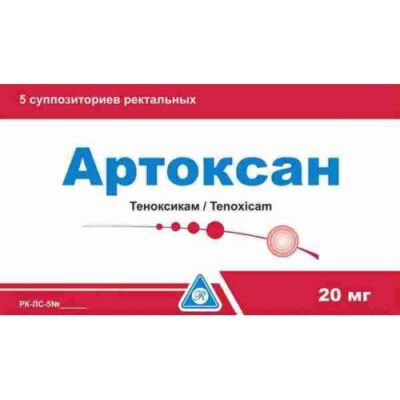