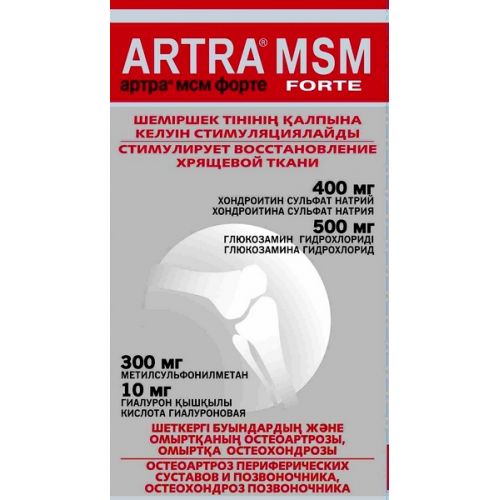 The instruction for medical use of FORTE ARTRA® MCM medicine Trade name АРТРА® the MCM FORT the International unlicensed name Is not present the Dosage form of the Tablet film coated Structure One tablet contains active agents: Chondroitin sodium sulfate of 400 mg of the Glycosamine hydrochloride of 500 mg Metilsulfonilmetan of 300 mg Hyaluronic acid (sodium hyalrunate) 10 mg excipients: microcrystalline cellulose, calcium hydrophosphate, stearic acid, croscarmellose sodium, magnesium stearate, silicon dioxide colloidal, structure of a cover: Opadray II orange (gipromelloza, polydextrose, titan dioxide (E171), magnesium hydrosilicate, maltodextrin, triglycerides of average length, FD&C dye yellow #6 (E110)). – ShchESTVO the Description of the Tablet of an oval form, biconvex, film coated from light – yellow-orange till dark orange color. Existence of a specific smell is allowed. Pharmacotherapeutic group Drugs for treatment of diseases of the musculoskeletal system others. The ATX M09AX code the Pharmacological Pharmacokinetics Bioavailability properties of a glycosamine at oral administration – 25% (effect of the first passing through a liver). It is distributed in fabrics: the highest concentrations are found in a liver, kidneys and an articulate cartilage. About 30% of the accepted dose are long persistirut in bone and muscle tissue. It is removed mainly by kidneys in an invariable look, partially – intestines. Concentration in sulfate chondroitin plasma: at intake once (or 2 times a day in a dose of 0.4 g) sharply increases in a dose of 0.8 g for 24 h. Absolute bioavailability – 12%. About 10% and 20% of the accepted dose are absorbed in the form of high-molecular and low-molecular derivatives respectively. It is metabolized by means of desulphonation. It is removed with urine. T1/2 – 310 min. In experimental models a certain bioavailability of hyaluronic acid at oral introduction is shown. A pharmacodynamics the Combined drug which effect is defined by properties of the substances which are its part. Components of drug have ability to slow down progressing of an osteoarthrosis. АРТРА® the MCM FORT suppresses destruction and stimulates regeneration of cartilaginous tissue. Drug has the anti-inflammatory and anesthetizing effect. Improves a blood stream in a subchondral bone. Reduces the need for non-steroidal anti-inflammatory drugs (NPVP). A glycosamine and chondroitin sulfate take part in synthesis of connective tissue. Introduction of an exogenous glycosamine strengthens development of a cartilaginous matrix and provides nonspecific protection against chemical injury of a cartilage. Also chondroitin sulfate serves as additional substrate for formation of a healthy cartilaginous matrix. Stimulates formation of a gialuronan, synthesis of proteoglycans and II collagen and also protects gialuronan from zymolysis (by suppression of activity of hyaluronidase) and from the damaging action of free radicals, maintains viscosity of synovial fluid. Hyaluronic acid – polysaccharide of group of glikozaminoglikan, is an important component of synovial fluid, defining its vyazkoelas-tichesky properties. It forms on all internal surface the covering layer which protects articulate cartilages and a synovial membrane from mechanical damages and also from free radicals and factors of inflammation. Metilsulfonilmetan (MCM) – organic sulfur-containing compound. Is a key metabolite of a dimethyl sulfoxide (DMSO). Contains 34% of natural sulfur. MCM is a part of many internal proteins (including proteins of connective tissue – collagen, elastin, a keratin), hormones and others metabolic active connections. MCM has the anti-inflammatory and anesthetizing effect. Indications – an osteoarthrosis of peripheral joints – backbone osteochondrosis the Route of administration and doses Inside. The adult on 1 tablet 2 times within the three first weeks, on 1 tablet once a day within the next weeks and months. A course of treatment not less than 3 months Side effects – are possible allergic reactions to drug components – pains in epigastriums, a meteorism, diarrhea, a constipation, nausea, Contraindication vomiting – the increased individual sensitivity to drug components – pregnancy and the period of a lactation – children’s and teenage age up to 18 years Medicinal interactions Increases absorption of tetracyclines, reduces effect of semi-synthetic penicillin. Drug is compatible to NPVP (non-steroidal anti-inflammatory drugs) and GKS (glucocorticosteroids). Strengthening of effect of indirect anticoagulants, antiagregant, fibrinolitik is possible. Special indications of Feature of influence of medicine on ability to run the vehicle or potentially dangerous mechanisms does not influence. Overdose Symptoms: Cases of overdose are not known. In case of reception of large amounts of drug strengthening of side effects is possible. Treatment: activated carbon inside, gastric lavage, symptomatic treatment. A form of release and packing On 30, 60 or 100 tablets film coated in a bottle from polyethylene with the screwing-up cover from the same material and the safety valve from a foil. On a bottle paste the label, a bottle cover with polyethylene film and together with the instruction for medical use in the state and Russian languages place in a pack from cardboard. To Store storage conditions in the dry place, at a temperature of 10 – 30o With, to Store out of children’s reach! 3 years not to use a period of storage after an expiration date. Prescription status Without prescription Unipharm Producer, INK., the USA the Owner of the registration certificate Unipharm, INK., the USA the Address of the organization accepting in the territory of the Republic of Kazakhstan claims from consumers on quality of products (goods) Representation Unipharm, INK. (USA) in Republic of Kazakhstan Almaty, Nauryzbay St. of the batyr 17, office 106 Phone number: +7 (727) 244-50-04 Fax number: +7 (727) 244-50-06