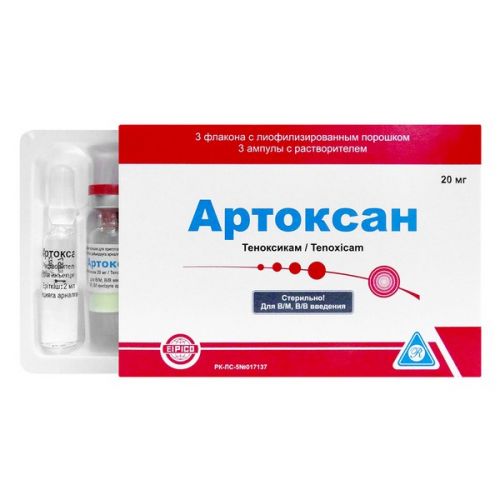 the Structure One Bottle solvent contains

active agent to tenoksika of 20 mg,

Solvent – water for injections of 2 ml.

the Lyophilized powder of greenish-yellow color.

Pharmacokinetics Communicates properties with proteins of plasma for 99%. Volume of distribution (Vd) of 0.15 l/kg. It is hydroxylated in a liver.

Easily passes through gistogematichesky barriers. Elimination half-life (T1/2) – 60-75 h. The main part is removed in the form of inactive metabolites with urine, other with bile.

It is characterized by high bioavailability of 100%.

Artoksan’s pharmacodynamics is effective non-steroidal anti-inflammatory drug (NPVP) with powerful anti-inflammatory, analgiziruyushchy and less significant febrifugal action. Properties of drug are caused by inhibition of both isoforms of enzyme of cyclooxygenase that leads to disturbance of metabolism of arachidonic acid and blockade of synthesis of prostaglandins.

The anti-inflammatory effect is caused by reduction of permeability of capillaries (limits exudation), stabilization of lizosomalny membranes (interferes with an exit of enzymes of the lysosomes causing damage of fabrics), oppression of synthesis or an inactivation of mediators of inflammation (prostaglandins, a histamine, bradykinin, lymphokines, complement factors). Reduces the number of free radicals in the inflammation center, the chemotaxis and phagocytosis oppresses.

Drug reduces painful sensitivity in the center of inflammation and affects the thalamic centers of pain, possesses the desensibilizing action (at prolonged use). In rheumatic diseases weakens a joint pain at rest and at the movement, reduces morning constraint and a swelling of joints, improves functions and increases the volume of movements of joints.

– a pseudorheumatism, the gouty arthritis ankylosing a spondylitis

Is intended for intramuscular or intravenous administration a dose makes 20 mg of 1 times/days. Maintenance dose: 10 mg a day.

At the expressed pain syndrome it is possible to increase a dose to 40 mg of 1 times a day.

– nausea, pains and unpleasant feelings in a stomach, a meteorism, diarrhea

– allergic reactions in the form of an itching, a small tortoiseshell, an erythema, Stephens of Johnson and Layell’s syndrome

– increase in concentration in plasma of creatinine, urea, increase in activity of hepatic transaminases

– hypostasis and irritation of eyes

– a serious illness of kidneys

– the planned anesthesia and surgeries

– the period of pregnancy and feeding by a breast

– the children’s and teenage age up to 18 years

of Artoksan increases expressiveness of effects of indirect anticoagulants. Interaction at simultaneous use with Cimetidinum, gipoglikemiziruyushchy means is not revealed, however implementation of the current control of effect of oral gipoglikemiziruyushchy drugs, especially in an initiation of treatment Artoksan is recommended. Simultaneous use of a probenitsid increases the speed of elimination of Artoksan.

At use with diuretics it is necessary to consider a possibility of a delay of sodium and water in an organism.

in the course of long-term treatment by Artoksan the control of function of a liver and kidneys is necessary.

Increase in a bleeding time is possible that should be considered at surgeries.

Should be careful at control of transport or potentially dangerous mechanisms.

Symptoms – strengthening of manifestations of the described side effects.

the Amounts of lyophilisate, equivalent 20 mg of a tenoksikam in colourless transparent glass bottles closed by rubber bungs, corked by an aluminum ring with the color latched cover.

On each bottle paste the self-adhesive label.

On 2 ml of solvent in ampoules of neutral glass.

On each ampoule paste the self-adhesive label or put marking with the fast-fixed paint for glass products.

3 bottles with the lyophilized powder and 3 ampoules with solvent put in blister strip packaging.

On 1 blister strip packaging together with the instruction for medical use in the state and Russian languages put in a cardboard box.

To Store storage conditions at a temperature from 15 to 25 Pages.

are made for Rotapharm, Great Britain