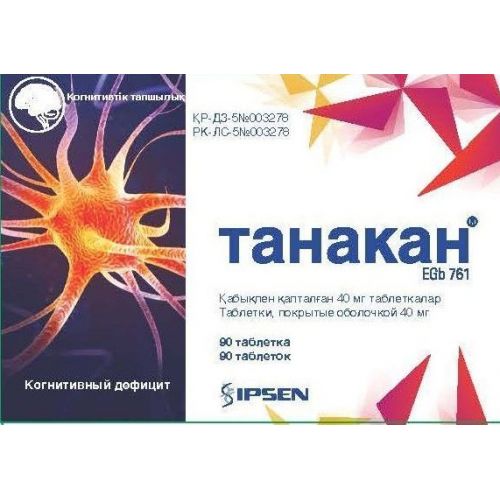 for medical use of medicine

of the Tablet, coated 40 mg

active agent: extract of a ginkgo of a bilob of standardized (EGb 761), the ginkgo containing 24% of glycosides and 6% of ginkgolidov-bilobalid of 40 mg,

of the Tablet of a biconvex form, round, coated brick-red color, on a break – beige color. Specific smell.

EGb761 Tanakanum represents medicine of plant origin. The exact mechanism of effect of drug is unknown. Data of pharmacological researches showed increase in EEG of caution (vigilance) at elderly subjects, decrease in viscosity of blood and improvement of cerebral perfusion in certain areas at healthy men (60-70 years) and decrease in aggregation of thrombocytes. Besides, the vasodilating action on blood vessels of a forearm causing increase in a regional blood-groove is shown.

– treatment of dizziness at damage of a vestibular mechanism

Inside, on 1 tablet 3 times a day at meal time, washing down also frac12, a glass of water.

Duration of a course of treatment is from 1 to 3 months.

by the Most frequent side reactions (& gt, 5%) received during five years’ clinical trial for assessment of efficiency and tolerance of the drug Tanakanum on 120 mg twice a day at patients are more senior than 70 years, there were in an abdominal pain, diarrhea and dizziness.

the class Frequency Side Reaction

Disturbances from the immune system

the Dizziness, a headache, a faint

Disturbances is frequent from digestive tract

Disturbances from skin and hypodermic fabric

– to children and teenagers up to 18 years

Simultaneous use of the drugs containing Ginkgo biloba with anticoagulants (for example, fenprokumon and warfarin) or antithrombocytic drugs (for example, klopidogrel, acetylsalicylic acid and other non-steroidal anti-inflammatory drugs) can influence effect of the listed drugs.

The interaction research with Talinololum shows that Ginkgo biloba can inhibit a P-glycoprotein at the intestinal level. It can lead to increase in exposure of drugs on which the R-glycoprotein has considerable impact in intestines (for example, a dabigatrana eteksilat). It is recommended to show care at a combination of drugs of a ginkgo and a dabigatran.

One research of interaction showed that Ginkgo biloba can influence increase in Cmax of nifedipine. At some patients the increase by 100% was observed that led to dizziness and strengthening of weight of inflows.

Simultaneous use of drugs of a ginkgo and efavirenz is not recommended, plasma concentration of an efavirenz can be reduced because of induction of CYP3A4.

instructions This Medicine contains lactose. It is contraindicated to persons with congenital intolerance of a galactose, a lactose intolerance or a syndrome of glucosic or galaktozny malabsorption.

At patients with patholologically the increased tendency to bleeding (hemorrhagic diathesis) and the accompanying anticoagulating and antithrombocytic therapy EGb761 Tanakanum should be applied only after consultation with the doctor.

The drugs containing a ginkgo can increase susceptibility to bleedings. Therefore, as a precautionary measure, intake of Tanakanum should be stopped in 3-4 weeks prior to planned operation.

At patients with epilepsy it is impossible to exclude emergence of the new attacks provoked by administration of drugs of a ginkgo.

Simultaneous use of the drugs containing a ginkgo of a bilob, and an efavirenz is not recommended.

Ginkgo biloba Extracts can reduce ability of thrombocytes to aggregation, the tendency to bleeding can be as a result increased. The available data are insufficient concerning reproductive toxicity. Use of drug is contraindicated during pregnancy.

It is unknown whether Ginkgo biloba or its metabolites with human milk is excreted. Due to the lack of sufficient data, use of drug during breastfeeding is not recommended.

On 15 tablets in blister strip packaging from a film of polyvinylchloride and aluminum foil are not known. On 2 or 6 packs together with the instruction for use in the state and Russian languages put

Storage conditions in a cardboard pack

to Store at a temperature not over 25C

to Store out of children’s reach!

not to apply after expiry date

the Address of the organization in the territory of the Republic of Kazakhstan, the accepting claim (offer) on quality of medicines from consumers and responsible for post-registration observation of safety of medicine: