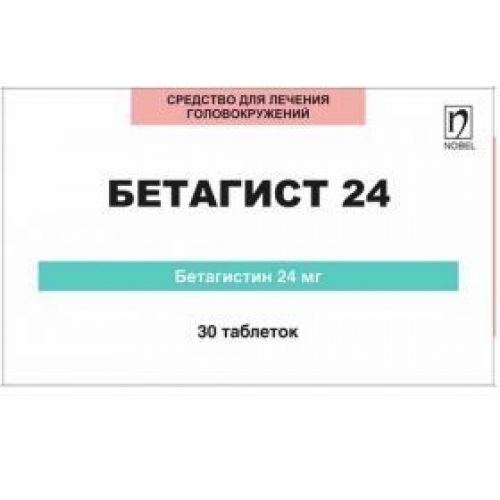 name Betagistin Lekarstvennaya a form
of the Tablet of 8 mg, 16 mg, 24 mg

Pharmacotherapeutic group
of Means for elimination of dizziness.
The code of automatic telephone exchange N07CA01

Pharmacokinetics Later properties of intake of a betagistin a hydrochloride is absorbed quickly and completely.
Linking with proteins of plasma low. Betagistina a hydrochloride is quickly metabolized in a liver in an inactive main metabolite, 2-pyridylacetic acid and in dimethyl-betagistin.
It is brought to 90% through kidneys in the form of the main metabolite.
A pharmacodynamics
Betagistin is a synthetic analog of a histamine. Affects histamine H1 and H3 receptors of an inner ear and vestibular nuclei of central nervous system. Improves microcirculation and permeability of capillaries of an inner ear, increases a blood stream in basilar arteries, normalizes endolymph pressure in a labyrinth and a snail.
BETAGIST renders dose-dependent overwhelming effect on generation of peaks in neurons of lateral and medial vestibular nuclei.
BETAGIST accelerates restoration of vestibular function after unilateral neurectomy, facilitating and accelerating processes of the central vestibular compensation. This effect is carried out thanks to antagonism of H3 receptors and characterized by the raising regulation of emission and exchange of a histamine. In a combination, all these properties carry out therapeutic effect of BETAGISTA in Menyer’s disease and vestibular dizziness.

Indications
– Menyer’s disease/syndrome
– the symptomatic treatment of vestibular dizziness of various genesis which is followed by nausea and vomiting
– sonitus, the progressing decrease in hearing (as a part of complex therapy)

the Route of administration and doses
the Recommended initial dose makes 8-16 mg a day. The main medical doses – 24-48 mg a day.
The maximum single dose makes 24 mg.
The maximum daily dose makes 48 mg which is divided into 2-3 receptions.

Medicinal interactions
As betagistin is an analog of a histamine, simultaneous use of H1 of antagonists can cause mutual easing of effect of active agents.

Special instructions
With care to use drug at patients from a peptic ulcer of a stomach and a duodenum in the anamnesis, bronchial asthma.
Features of influence of medicine on ability of driving or potentially dangerous mechanisms
Due to the emergence of side effect in the form of fatigue the ability to reaction can be reduced that breaks ability to driving of the car and ability to operate the vehicles.

The form of release and packing
On 10 tablets place in blister strip packaging from a formatura of aluminum and printing aluminum foil.
On 3 or 6 planimetric packs together with the instruction for medical use in the state and Russian languages place in a pack cardboard with the hologram of firm – producer.

To Store storage conditions at a temperature not over 25 ºС, in the dry, protected from light place.
To store out of children’s reach!