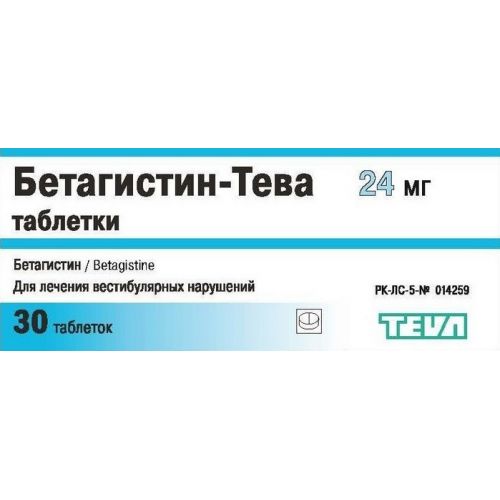 The instruction for medical use of Betagistin-Tev Torgovoye medicine a name Betagistin-Tev the International unlicensed name Betagistin Lekarstvennaya a form of the Tablet, 16 mg and 24 mg structure One tablet contains active agent – a betagistin a hydrochloride of 16 mg or 24 mg, excipients: K90 povidone, cellulose microcrystalline, lactoses monohydrate, silicon dioxide colloidal anhydrous, krospovidon, stearic acid the Description of the Tablet of a cylindrical form of white or almost white color, with a facet on both sides, with a print In 16 on one party and risky on another (for a dosage of 16 mg). Tablets of round shape, biconvex white or whitish color, with risky on one party (for a dosage of 24 mg). Pharmacotherapeutic group Drugs for treatment of diseases of nervous system others. Means for elimination of dizziness. Betagistin. The ATX N07CA01 code the Pharmacological Pharmacokinetics Later properties of oral use of a betagistin a hydrochloride is absorbed quickly and completely. Linking with proteins of plasma low (less than 5%). Betagistina a hydrochloride is quickly metabolized in a liver in an inactive main metabolite, 2-pyridylacetic acid and in dimetilbetagistin. Elimination half-life makes 3.5 hours. Removal of a betagistin of a hydrochloride for 90% through kidneys in the form of the main metabolite. Betagistin’s pharmacodynamics a hydrochloride is a synthetic analog of a histamine. Affects histamine H1 and H3 receptors of an inner ear and vestibular nuclei of central nervous system. Improves microcirculation and permeability of capillaries of an inner ear, increases a blood stream in basilar arteries, normalizes endolymph pressure in a labyrinth and a snail. Indications For treatment – Menyer’s disease or Menyer’s syndrome – vestibular dizzinesses of various genesis (dizziness with nausea and vomiting, a ring in ears, a hearing loss) the Route of administration and doses the Recommended initial dose – 24 mg a day (or on 16 mg 2 times a day) inside in time or after meal. The daily dose can be increased up to 48 mg. Throughout a course of treatment the dose is adjusted depending on therapeutic effect. Duration of a course of treatment is defined by the attending physician individually. The stable therapeutic effect occurs after two weeks of treatment. The best results are observed after several months of treatment. Side effects Seldom – a headache, drowsiness – increase in intracranial pressure – feeling of heat – heartbeat, constraint in heart – gastrointestinal disorders: nausea, vomiting, heartburn, pain in epigastric area, a meteorism (the specified symptoms will be less expressed if to take the drug at meal time or to reduce a dosage) – exacerbation of the bronchial asthma which is available in the anamnesis, rash, urticaria, an itching, anaphylactic reactions of the Contraindication – hypersensitivity to a betagistin to a hydrochloride and/or to any of drug components – a pheochromocytoma – pregnancy and the period of a lactation – children’s and teenage age up to 18 years – intolerance of a galactose, deficiency of Lappa lactase or malabsorption of glucose galactose With care: – the peptic ulcer of a stomach – bronchial asthma – at patients with urticaria, rash or allergic rhinitis – heavy hypotonia Medicinal interactions Metabolism of a betagistin is suppressed with the drugs inhibiting a monoaminooxidase (MAO) including subtype B (for example, selegilin). As the betagistina a hydrochloride is an analog of a histamine, simultaneous use of H1 of antagonists can cause mutual easing of effect of active agents. Special instructions It is necessary to be careful when prescribing drug at patients with a round ulcer (including in the anamnesis) as development of dyspepsia is possible. At reception of a betagistin the symptoms of a small tortoiseshell, rash, allergic rhinitis can worsen. Features of influence on ability of driving or potentially dangerous mechanisms Due to the side effect in the form of drowsiness the decline in the ability to driving of the car and control of cars is possible. Overdose Symptoms: dryness in a mouth, nausea, vomiting, dyspepsia, an ataxy, face reddening, dizziness, the increased heartbeat, a bronchial spasm and hypostasis and after reception of very high doses can be also observed convulsions. Treatment: symptomatic (gastric lavage, use of activated carbon). There is no specific antidote. A form of release and packing On 10 tablets in blister strip packaging from a film of PVC and aluminum foil. On 3 or 6 planimetric packs together with the instruction for medical use in the state and Russian languages place in a pack from cardboard. To Store storage conditions at a temperature not above 25ºС. To store out of children’s reach! 3 years not to apply a period of storage after an expiration date. Prescription status According to the prescription Katalent Germany Shorndorf GmbH Producer, Germany the Packer of Merkle GmbH, Germany the Owner of the registration certificate ratiopharm GmbH, Germany the Address of the organization accepting in the territory of the Republic of Kazakhstan claims from consumers on quality of products (goods) of ratiopharm Kazakhstan LLP, 050040, Almaty, Al-Farabi Ave. 19, BC Nurly-Tau, 1B, office 603. The address of the organization, in the territory of the Republic of Kazakhstan responsible for post-registration observation of safety of medicine of ratiopharm Kazakhstan LLP, 050040, Almaty, Al-Farabi Ave. 19, Nurla Tau’s BC, 1B, office 603.