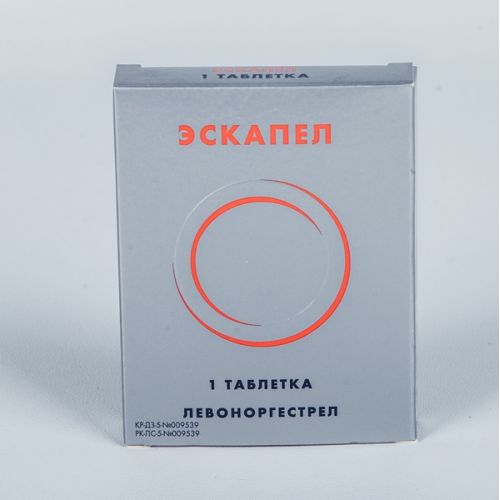 Flat tablets of white or almost white color, with a facet, and with an engraving of G00 on one party.

Sex hormones and modulators of function of genitals, progestogens.

The code of automatic telephone exchange

Pharmacokinetics At properties oral administration levonorgestrel is quickly and almost completely soaked up by G03A C03. In 2 hours after reception of the tablet Cmax Escapelle = 18.5 ng/ml. The average size AUC (0 – ∞) = 310182.56 pg. h/ml. After achievement of the maximum concentration the levonorgestrel level in blood decreases, average elimination half-life ≈ 26 h.

Levonorgestrel takes up with albumine and the globulin, connecting sex hormones (G,CSH). 1.5% of total in blood plasma are in a form of free steroid, 65% are specifically connected with GSPG.

The absolute bioavailability is 100% of the accepted dose.

0.1% of the accepted dose of drug get to the baby’s organism together with breast milk.

Levonorgestrel – active ingredient of the drug Escapelle. The exact mechanism of effect of drug is unknown. In the recommended doses levonorgestrel has effect on an ovulation and fertilization if sexual intercourse takes place in a preovulatory phase of a menstrual cycle, i.e. at the time of the largest probability of fertilization. Besides, the endometrium changes caused by drug interfere with oospore implantation. At the begun implantation, drug is inefficient.

Prevents pregnancy in 84% of cases. The recommended doses of levonorgestrel have no significant effect on blood clotting factors, exchange of fats and carbohydrates.

Is applied orally in the first 72 hours after sexual intercourse.

If within three hours after reception of a tablet there was vomiting, it is necessary to take one more pill.

The pill Escapelle can be taken in any day of a menstrual cycle provided that the previous periods proceeded normally.

After use of the emergency means it is necessary to apply local barrier contraceptives, for example condom to prevention of conception, up to the following periods. Use of the tablet Escapelle is not a contraindication for continuation of regular intake of oral hormonal contraceptive.

– pains in the bottom of a stomach, disturbances of a menstrual cycle, a delay of periods more than 7 days

Perhaps temporary change of nature of periods. At 78% of women the shifts of terms of periods are in limits of 5 days. At a periods delay for more than 5-day term it is necessary to exclude pregnancy existence.

– hypersensitivity to active ingredients or to any of drug excipients

– heavy degree of a hepatic unsufficiency

Drugs of levonorgestrel can enhance toxicity of cyclosporine due to suppression of his metabolism.

of the Tablet Escapelle are intended for emergencies. They does not replace regular contraception at all.

Drugs of urgent contraception not in all cases prevent conception. Probability of fertilization is high in cases when time of sexual intercourse is definitely not known and when from the moment of the sexual intercourse unprotected by contraception there passed more than 72 hours in the period of one menstrual cycle. In such cases the reception of the tablet Escapelle after the second sexual intercourse will not bring desirable result. At a periods delay more than for 5 days and also in case in due time come periods proceed unusually, or suspicion on pregnancy for any other reasons takes place, it is necessary to perform gynecologic examinations for a pregnancy existence exception.

The pregnancy which followed against the background of use of the tablets Escapelle can be extrauterine, especially, at women with pains in the lower part of a stomach, at appearance of faints, existence in the anamnesis of ectopic pregnancy, operation on bodies of a small pelvis or their inflammation.

In heavy abnormal liver functions the use of the tablets Escapelle is not recommended. At disturbances of absorption in digestive tract (e.g., Crohn’s disease) reduce efficiency of contraceptive drug. Drug use, usually, does not break regularity and the normal nature of periods. Sometimes, perhaps premature emergence of periods or its delay (approximately? 2 days). After use of the tablet Escapelle, it is recommended to provide further regular contraception. If Escapelle is applied because of the mistake made in regular hormonal contraception and at the same time in the corresponding seven-day break of periods will not follow, it is necessary to exclude pregnancy existence.

It is necessary to avoid repeated use of the tablets Escapelle during the same menstrual onoff cycles avoidance of disturbances of a menstrual cycle.

Urgent contraception does not replace need for protection against venereal diseases.

of Researches on influence of the drug Escapelle on ability to run vehicles and other mechanisms it was not carried out.

Symptoms: nausea, disturbances of a menstrual cycle.
Treatment: symptomatic, specific antidote there is

no Form of release and packing

On 1 tablet in blister strip packaging from PVC and aluminum foil.

Not to use a period of storage of 5 years after expiry date.

the Address of the organization accepting in the territory of the Republic of Kazakhstan claims from consumers on quality of products: 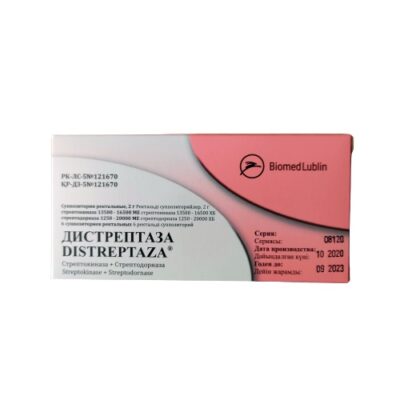