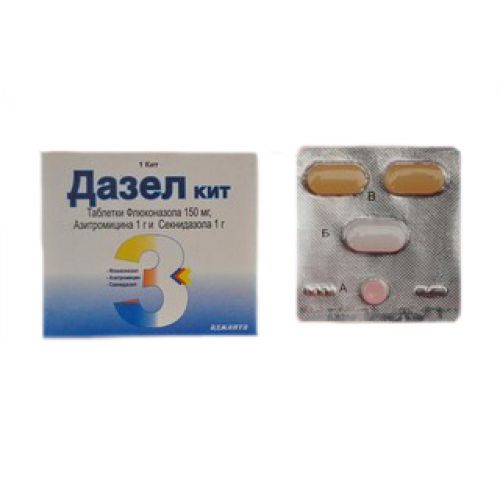 Antibacterial agents / Antiseptic and Anti-Inflammatory / Internal Use / Obstetrics and Gynecology

Flukonazol of a tablet, not coated 150 mg

of Azithromycin of a tablet, coated 1 g

of Seknidazol of a tablet, coated 1 g

Seknidazola of a tablet: yellowish tablets of a capsuloobrazny form, coated, with risky on one party.

Flukonazol Pharmacokinetics properties: the bioavailability of drug at intake is 90% that is comparable with indicators at intravenous administration of drug. The maximum concentration in blood plasma is reached within 1-2 hours after intake. Elimination half-life (T1/2) makes about 30 hours. Flukonazol is brought generally with urine, about 80% of the accepted dose are removed in not changed look, about 11% – in the form of metabolites.

Azithromycin: at intake, drug is quickly soaked up in the digestive tract (DT) and widely spreads on an organism. The indicator of linking with proteins of blood plasma depends on concentration drug in blood plasma and makes 51% at concentration 0.02mkg/ml and 7% at concentration 2mkg/ml. Main way of elimination of drug biliary. With bile drug is removed in not changed look. After intake of Azithromycin within a week, about 6% of the accepted dose begin to be removed with urine in not changed look.

He joins only in 15% plasma proteins.

He well extends on all organism, and did not find high concentration in placentary fabrics. Approximate time of its distribution is 10 minutes. Because of slow absorption, he can remain in intestines more long time and fights in situ in intestines against such parasites as: zhiardiya and amoeba.

– the vaginita caused by microorganisms, sensitive to drug,

Azithromycin: 1 tablet in 1-2 hours prior to meal.

Flukonazol: 1 tablet to or after meal.

This complex is intended for single dose in one day of all components. Need of repeated treatment is defined by the attending physician individually.

Azithromycin has to be accepted on a hungry stomach, in 1 hour prior to meal. 2 pill Seknidazola are taken at the same time in the form of a single dose during meal to avoid development of side effects from digestive tract. Flukonazol it is possible to accept along with Seknidazol or separately from him.

– a headache, dizziness, an ataxy, paresthesias, a polyneuropathy

– hypersensitivity to azithromycin, erythromycin or any antibiotic of group of macroleads

– hypersensitivity to a flukonazol or any other component of drug

Flukonazol: at simultaneous use with coumarinic anticoagulants the increase in a prothrombin time is noted. Combined use of a flukanozol and oral hypoglycemic means of patients with diabetes is allowed, however the doctor has to mean a possibility of development of a hypoglycemia. At simultaneous use with rifampicin the shortening of elimination half-life of a flukonazol is noted.

Seknidazol: at simultaneous use with anticoagulants the action of the last can amplify. At simultaneous use of a seknidazol with Disulfiramum the development paranoiac reaction and psychosis is possible, with ethanol the development of the effects similar to effect of Disulfiramum is possible. It is not recommended to combine with not depolarizing muscle relaxants (a vekuroniya bromide). At simultaneous use with lithium drugs seknidazol increases its concentration in blood plasma. At a combination to amoxicillin the activity concerning Helicobacter pylori increases.

Flukonazol: it is necessary to appoint drug with care at disturbance of functions of a liver and kidneys. The dose of drug has to be reduced for patients with impaired renal function. In a slight and medium-weight renal failure & frac12, a usual dosage. In a heavy renal failure 1/3 usual dosages.

Azithromycin: it is necessary to appoint with care to patients with dysfunctions baking and cardiac arrhythmias. There are no data on Azithromycin use by patients with impaired renal function and therefore such patients should appoint drug with care.

Seknidazol: during treatment it is necessary to avoid alcohol use

of the Tablet Dazel Keith in pediatric practice are not applied.

Symptoms: strengthening of side effects.

1 blister containing 4 tablets together with the instruction for use in a cardboard box.

To Store storage conditions in the dry, protected from light place, at a temperature 15C up to 30C.