View cart “50 mg Lamictal 30s chewing tablets” has been added to your cart.
Sold out 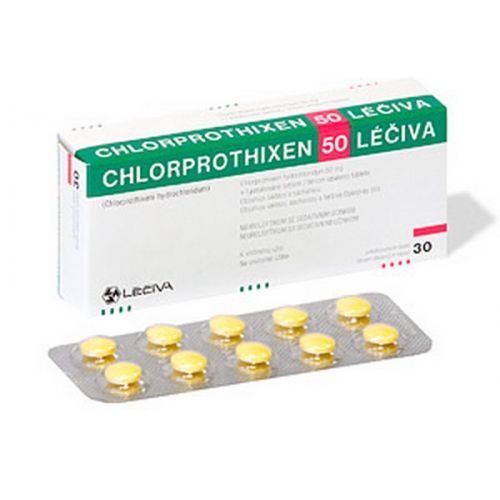 The instruction for use
medicine for experts
CHLORPROTHIXENE

Pharmacokinetics Chlorprothixene properties is quickly soaked up in digestive tract, its action after intake comes in 30 minutes. Contacts proteins of plasma (over 99%). Chlorprothixene gets through a placental and blood-brain barrier and in small amounts is emitted with breast milk. Elimination half-life makes 8-12 hours. It is metabolized in a liver, metabolites have no antipsychotic activity, are allocated with a stake and urine
the Pharmacodynamics
Chlorprothixene is the neuroleptic derivative of thioxanthene. Renders antipsychotic and expressed sedative effects. Has moderate antidepressive properties, possesses holinoblokiruyushchy and adrenoceptor blocking action
Antipsychotic effect of chlorprothixene is connected with its blocking impact on dopamine receptors. Also antiemetic and analgesic properties of drug are connected with blockade of these receptors. Chlorprothixene is capable to block 5-HT2 – receptors, a1-adrenoceptors and also H1 – histamine receptors, than its adrenolytic, hypotensive and anti-histamine effects

Indications are defined
the Drug Chlorprothixene is intended for use for adults, teenagers and children 6 years are aged more senior.
– psychoses, including the schizophrenia and maniacal states proceeding with psychomotor excitement, agitation and alarm
– depressions
– neurosises
– sleep disorders
– psychosomatic disorders (including at the dermatosis which is followed by a persistent itching)
– at the increased physical activity, irritability, excitement, behavioural disorders at elderly patients
– psychosomatic, neurotic and behavioural disorders at children

the Route of administration and doses
the drug dosing Mode Chlorprothixene is defined individually, depending on a look and disease severity, therapeutic effect. Usually at the beginning of a course of treatment the adult drug 3 – 4 times a day appoint in a dose 30 – 45 mg (2-3 tablets), to children and elderly patients drug 3 – 4 times a day appoint in a dose 15-30 mg (1-2 tablets) 3 – 4 times a day or in a dose of 50 mg (1 tablet). Considering the significant sedative effect of drug, it is recommended to appoint the most part of a daily dose in the evening.
It is necessary to begin a course of treatment with a low dose of drug, gradually increasing it further, before obtaining therapeutic effect. The daily dose of drug at adults should not exceed 600 mg.
At drug withdrawal, the dose decline should be carried out gradually. The fast termination of a course of treatment drug even later can be shown several weeks by vomiting, the increased sweating, a headache, insomnia, concern.
Chlorprothixene should be accepted in time or after a meal, tablets should be swallowed entirely, washing down with a glass of water or milk

Side effects
Usually Chlorprothixene is transferred well. Probability of emergence of side effects increases at prolonged use of high doses of drug and also at children and at elderly people.
– at the beginning of a course of treatment, are possible the increased fatigue, the motive block, orthostatic hypotension
– are in rare instances noted the effects connected with anticholinergic action – dryness in a mouth, tachycardia, inflows, accommodation disturbance, a constipation, urination disorders
– disturbances from bodies of a hemopoiesis in the form of changes of a picture of peripheral blood (agranulocytosis, a leukocytosis, a leukopenia, hemolytic anemia),
– yellowness of integuments
– allergic reactions in the form of skin rashes and an itching, the raised photosensitization, a photodermatitis
– changes from the endocrine status in the form of an amenorrhea, a galactorrhoea, a gynecomastia, disturbance of carbohydrate metabolism, easing of potency and a libido
– increase in appetite with increase in body weight, thermal control disturbance
– paradoxical reactions in the form of a condition of excitement, agitation, irritability

Special instructions
Extra care should be observed when prescribing the drug Chlorprothixene sick, inclined to alcoholism and drug addiction, the patient with a myasthenia, closed-angle glaucoma, at the patients having epilepsy, parkinsonism in the profound atherosclerosis of vessels of a brain, at tendency to collapses, at the significant cardiovascular and respiratory insufficiency, hemopoiesis disturbances, in the profound abnormal liver functions and kidneys, diabetes, a prostatauxe and also at the weakened patients and at elderly people.
With care it is necessary to appoint drug at treatment an electroshock, simultaneous use of medicines with the oppressing action to the central nervous system.
Use of chlorprothixene can result in false positive take when carrying out the immunobiological test of urine for pregnancy, to false increase in level of bilirubin in blood, to change of level of an interval of QT on the electrocardiogram.
During the Chlorprothixene drug treatment it is recommended to refrain from consumption of alcoholic drinks, to avoid the increased insolation and also extremely high or low temperature influence.
Influence of medicine on about a posobnost to run vehicles
Administration of drug Chlorprothixene has negative impact on the activity demanding the high speed of mental and physical reactions, for example: the control of vehicles, service of cars, work be on the ball, etc.

The overdose
Administration of drug in the dose which is once making 2.5 – 4 and more can be deadly, at children this dose makes 4 mg/kg of body weight.
At overdose (intoxication) drug the following symptoms are possible: drowsiness, confusion of consciousness, coma, respiratory insufficiency, arterial hypotension, tachycardia, feverish state, miosis. When stopping symptoms of intoxication, spasms, hyperactivity, a hamaturia are possible.
At emergence of signs of overdose (intoxication) it is necessary to wash with drug a stomach, vomiting should not be caused as it can lead to aspiration of emetic masses, accept activated carbon, salt laxatives, provide adequate breath, it is urgent see a doctor.
Treatment is symptomatic, against the background of control of indicators of the vital functions of an organism. It is necessary to provide adequate breath, the corresponding correction of body temperature, control and correction of arterial blood pressure. It is not necessary to apply adrenaline because of danger of developing of paradoxical arterial hypotension.

A release form
On 10 tablets in the blister from PVC/Al. On 3 blisters together with the instruction for use are placed in a cardboard pack.

Storage conditions
In the dry place at a temperature of +10 to + 25 °C.
To store out of children’s reach!