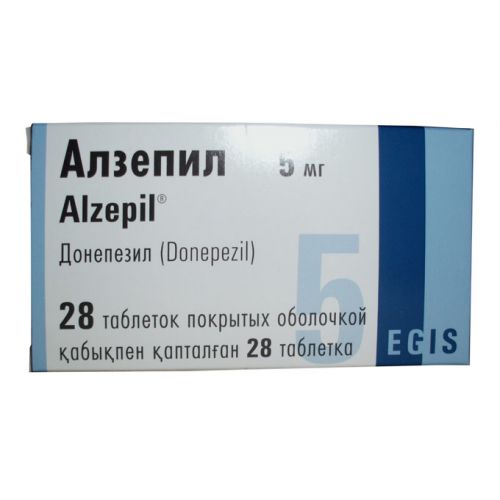 Film-coated tablets of white or almost white color, round, biconvex, engraved with ” E 381″ on one side, odorless or almost odorless.

The drug should be stored out of the reach of children at a temperature not exceeding 30 ° C.

The shelf life is 5 years. Do not use the drug after the expiration date.

A single dose of 5 mg or 10 mg in an equilibrium state is accompanied by inhibition of cholinesterase activity (estimated on a model of erythrocyte membranes) by 63.6% and 77.3%, respectively. The ability of donepezil hydrochloride to inhibit erythrocyte cholinesterase activity correlates with changes in results on the ADAS – cog scale , which is a sensitive tool for assessing changes in cognitive function. The ability of donepezil hydrochloride to alter the course of associated neurological changes has not been studied. Thus, donepezil cannot be considered to influence disease progression.

The efficacy of donepezil was investigated in four placebo-controlled studies, two six months and two one year.

In a six-month clinical trial, analysis was performed using three efficacy criteria after completion of donepezil . We used the ADAS – Cog scale (an indicator of cognitive function); a scale of the clinician’s impressions of changes based on interviews and data from caregivers (an indicator of overall level of function); subscale of daily activity of the clinical scale for assessing dementia (an indicator of the patient’s ability to participate in the life of society, to do household chores, favorite things, to care for himself).

Patients who met the criteria below were considered to have responded to treatment.

Donepezil hydrochloride caused a dose-dependent , statistically significant increase in the percentage of patients who were found to be responders.

Method of application, course and dosage

The drug is taken orally, preferably in the evening before bedtime.

Treatment should be initiated and supervised by a physician experienced in the diagnosis and treatment of Alzheimer’s dementia . The diagnosis should be based on accepted recommendations, for example, DSM – IV , ICD-10. Treatment with donepezil should only be started with a caregiver who can monitor the drug regularly.

Treatment begins with the use of the drug at a dose of 5 mg 1 time / day and continues for at least 4 weeks to achieve C ss donepezil and to assess the early clinical effect of therapy.

After 1 month, the dose of Alzepil ® can be increased to 10 mg 1 time / day , which is the maximum recommended daily dose. Doses exceeding 10 mg / day have not been studied in clinical studies.

After discontinuation of the drug, there may be a gradual decrease in the beneficial effect of treatment.

Patients with impaired renal function do not need to change the treatment regimen, because this condition does not affect the clearance of donepezil .

The drug Alzepil ® is not intended for the treatment of children and adolescents .

It is estimated that the median lethal dose of donepezil hydrochloride after a single oral dose in mice and rats is 45 mg / kg and 32 mg / kg, respectively, which is approximately 225 and 160 times higher than the maximum recommended dose for humans of 10 mg / kg / day . The animals showed dose-dependent signs of stimulation of the cholinergic system, which included decreased spontaneous mobility, prone position, staggering gait, lacrimation, clonic seizures, respiratory depression, salivation, miosis , fasciculations, and a decrease in body surface temperature.

Symptoms: An overdose of cholinesterase inhibitors can lead to a cholinergic crisis characterized by severe nausea, vomiting, drooling, sweating, bradycardia, hypotension, respiratory depression, collapse, and seizures. Muscle weakness may increase, which can lead to death if the respiratory muscles are affected.

Treatment: As with any overdose, general supportive treatment should be given. Tertiary anticholinergic drugs, for example, atropine, can be used as antidotes in case of an overdose of Alzepil ® . Recommended intravenous administration of atropine sulfate in increasing doses until the effect is achieved: first, 1-2 mg / kg intravenous is administered, followed by additional doses depending on the clinical response. Atypical reactions in blood pressure and heart rate have been reported with the introduction of other cholinomimetics together with quaternary anticholinergic drugs, for example, glycopyrrolate . It is not known whether it is possible to eliminate donepezil hydrochloride and / or its metabolites by dialysis (hemodialysis, peritoneal dialysis, or hemofiltration ).

Studies in vitro have shown that the metabolism of donepezil used part isozymes of cytochrome P450 – 3A4, and to a lesser extent – 2 D 6. ketoconazole and quinidine , are inhibitors of CYP 3 A 4 and CYP 2 D 6, respectively, inhibit the metabolism of donepezil . Consequently, these and other CYP 3 A 4 inhibitors such as itraconazole and erythromycin and CYP 2 D 6 inhibitors such as fluoxetine may inhibit donepezil metabolism . In healthy volunteers, ketoconazole increased mean donepezil concentrations by about 30%. Enzyme inducers such as rifampicin , phenytoin , carbamazepine, and ethanol can cause a decrease in donepezil concentration . Since the extent of this inhibitory or inducing effect is unknown, caution should be exercised when using such agents in combination with donepezil .

Donepezil has an effect on the action of drugs with anticholinergic activity. In addition, with the simultaneous use of donepezil, it can enhance the effect of succinylcholine , other muscle relaxants or cholinergic receptor agonists and beta-blockers, which affect cardiac conduction.

There is no experience of using the drug in women during pregnancy and during breastfeeding.

Animal studies have not shown a teratogenic effect of donepezil , however, peri- and postnatal toxicity has been established. The potential risk to humans is unknown. Therefore, Alzepil ® should not be used during pregnancy, unless treatment is absolutely necessary.

In rats, donepezil is excreted in milk. It is not known whether the drug is excreted in breast milk in lactating women; such studies have not been conducted. If it is necessary to use the drug during lactation, the question of stopping breastfeeding should be resolved.

The most common adverse events are diarrhea, muscle cramps, fatigue, nausea, vomiting, and insomnia. Dizziness, headache, pain, accidents and colds have also been reported. In most cases, these phenomena disappear and do not require discontinuation of drug administration.

From the side of the cardiovascular system: infrequently – bradycardia; rarely – sinoatrial blockade, AV blockade.

On the part of the skin and subcutaneous tissues: often – rash, itching.

On the part of laboratory and instrumental studies: infrequently – a slight increase in the activity of muscle CPK in the blood serum.

* When evaluating patients with fainting or seizures, the possibility of heart block or prolonged sinus pauses should be considered.

** When registering cases of the development of hallucinations, agitation and aggressive behavior, abnormal dreams and nightmares, it was reported that these manifestations stopped after dose reduction or drug withdrawal.

*** In case of violation of the liver of unknown etiology should consider discontinuation of the drug Alzepil ® .

**** There have been reports of rhabdomyolysis , which developed independently of the NNS, in close temporal relationship either with the initiation of donepezil or with an increase in dose.

The provision of data on the expected adverse reactions of the drug is very important to allow continuous monitoring of the risk / benefit ratio of the drug. Health care providers should be provided with information on any suspected adverse reactions through the contacts listed at the end of the instructions, as well as through the national information collection system.

The efficacy of donepezil has not been established in patients with severe Alzheimer’s dementia , other types of dementia, or memory impairment (eg, age-related decline in cognitive function).

Alzepil ® is a cholinesterase inhibitor , and therefore the drug can enhance succinylcholine relaxation of muscles during anesthesia.

Inhibitors of Cholinesterase , due to their pharmacological action, can exert vagotonic effects on heart rate (e.g., cause bradycardia). The possibility of such an action should be especially taken into account in case of SSA or other disorders of AV conduction, for example, with sinoatrial blockade or AV blockade.

Fainting and seizures have been reported. When examining such patients, the possibility of heart block or long pauses in sinus rhythm should be considered.

Patients with an increased risk of ulceration, such as those with a history of peptic ulcer disease or those receiving concomitant NSAID treatment, need to be monitored for symptoms of ulceration . However, clinical trials of donepezil compared with placebo did not show an increase in the incidence of peptic ulcers or gastrointestinal bleeding.

Cholinomimetics can cause impaired urine flow from the bladder, but such effects have not been observed in clinical trials of donepezil .

It is believed that cholinomimetics have some propensity to provoke generalized seizures. However, seizure activity can also be a manifestation of Alzheimer’s disease.

Cholinomimetics can exacerbate or cause extrapyramidal symptoms.

There are very rare reports of the development of NNS associated with the use of donepezil , especially in patients also receiving concomitant antipsychotic drug therapy.

If the patient develops signs and symptoms of NMS or has an unexplained high fever without additional clinical manifestations, treatment should be discontinued.

Inhibitors of cholinesterase , due to their pharmacological effects, should be used with caution in patients who have indications in the history of asthma or obstructive pulmonary disease. Avoid the simultaneous administration of the drug Alzepil ® and other inhibitors of acetylcholinesterase , as well as agonists or antagonists of the cholinergic system.

There are no data on the use of the drug in patients with severe liver dysfunction.

Influence on the ability to drive vehicles and use mechanisms

Donepezil has an insignificant or moderate effect on the ability to drive and operate machinery.

Dementia of the Alzheimer’s type itself may be associated with impaired ability to control the car and the use of technology. The ability of a patient with Alzheimer’s type dementia to drive a car or use complex equipment while taking donepezil should be decided by the physician after assessing the patient’s individual response to treatment.

Patients with impaired renal function do not need to change the treatment regimen, because this condition does not affect the clearance of donepezil .

Application for violations of liver function

In case of mild or moderate impairment of liver function, the dose of the drug should be increased taking into account individual tolerance.

There are no data on the use of the drug in patients with severe liver dysfunction. 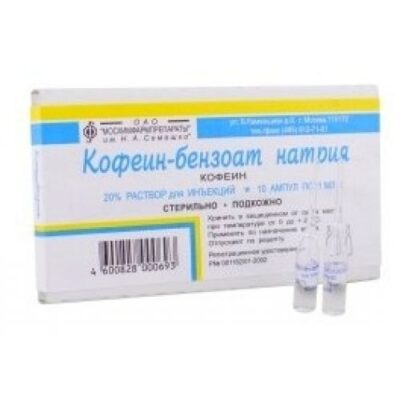