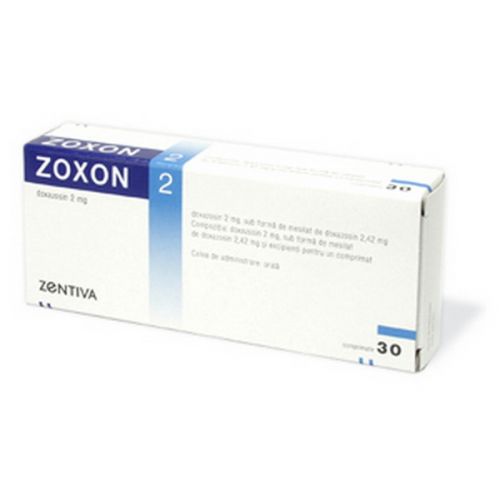 the Trade name
of ZOKSON

name Docsazozin Lekarstvennaya a form
of the Tablet of 1 mg, 2 mg, 4 mg

Pharmacokinetics Later properties of intake docsazozin is well soaked up in digestive tract, the level of the maximum concentration in blood plasma is reached in 1 – 2 hour after reception. Up to 98% contacts proteins of plasma. Docsazozin is exposed to considerable biotransformation in a liver, metabolites have no pharmacological activity. Removal of drug from plasma is two-phase, with final elimination half-life 22 hours. The most part of the docsazozin accepted inside is removed in the form of inactive metabolites with a stake, less than 5% of the accepted dose are allocated in not changed look.
The pharmacodynamics
Active ingredient of the drug Zokson is docsazozin – a selection blocker of alfa1-adrenoceptors. Prescribing of drug to patients with a benign hyperplasia of a prostate leads to considerable improvement of an urodynamic and reduction of manifestations of symptoms of a disease. The effect of positive action is explained by blockade of the alfa1-adrenoceptors located in a stroma and the capsule of a prostate and also in a bladder neck.
Use of the drug Zokson leads to significant decrease in level of arterial blood pressure as a result of reduction of the general peripheric vascular resistance. When prescribing drug of 1 times a day clinically significant hypotensive effect which remains for 24 hours is reached. Gradual decrease in level of arterial blood pressure is noted, at the same time the level of the maximum pressure decrease is reached in 2 – 6 hours after administration of drug.
The drug Zokson has positive impact on a blood lipid profile, substantially reduces the level of concentration of triglycerides and cholesterol that promotes reduction of risk of development of coronary heart disease, use of drug leads to reduction of a hypertrophy of a left ventricle of heart, promotes oppression of aggregation of thrombocytes and reduces tendency to a thrombogenesis.
Zokson has no negative impact on the general metabolism, can be applied at the patients having bronchial asthma, diabetes, gout and also at elderly people.

Side effects
Usually the drug Zokson is transferred well.
– seldom: orthostatic hypotension (in isolated cases with an unconscious state), as a rule, after the first administration of drug or at increase in a dose
– dizziness, a headache, fatigue, an indisposition, peripheral hypostases, an asthenia, drowsiness, nausea, rhinitis, nasal bleeding
– diarrhea, vomiting, an abdominal pain
– isolated cases: agitations, a tremor, tachycardia, heart consciousness, stethalgias, stenocardia attacks, a myocardial infarction, arrhythmia, cerebrovascular disturbances, however reliable connection of their emergence with administration of drug
– seldom was not established: skin rashes and an itching
– isolated cases of a disorder of vision, incontinence of urine, a priapism, a polyuria.
Patients should report to the doctor about all side (unusual) effects, including, not specified in the present instruction.

Contraindications
– hypersensitivity to a docsazozin, derivatives of quinazoline or other components of drug
– children’s age up to 18 years
– pregnancies and the period of a lactation.

Medicinal interactions
the Possibility of simultaneous use of the drug Zokson decides on other medicines by the doctor. Patients should not use without consultation of the doctor drug along with other medicines.
At the simultaneous use of the drug Zokson and other medicines intended for treatment of arterial hypertension, perhaps mutual strengthening of hypotensive action.
Simultaneous use of a docsazozin with diuretics (derivatives of a tiazid),
β-adrenoblockers, furosemide, non-steroidal anti-inflammatory drugs, antibiotics, oral gipoglikemiziruyushchy means, uricosuric means and anticoagulants does not lead to negative interaction of drugs of the marked-out groups.

Special instructions
patients should be careful when prescribing the drug Zokson with an abnormal liver function (as well as when prescribing other drugs which are exposed to active biotransformation in a liver).
Influence on ability to driving of motor transport and control of mechanisms
Administration of drug Zokson can have negative impact on the activity demanding the high speed of mental and physical reactions, for example: the control of vehicles, service of cars, work be on the ball
, etc.

Overdose
Symptoms: the overdose docsazoziny can lead to arterial hypotension. In this case administration of drug should be stopped, the patient needs to be laid on a back, having hung the head down.
Treatment: to wash out a stomach, to appoint activated carbon, patients need to see a doctor urgently.
The symptomatic treatment directed to stabilization of indicators of a hemodynamics and the vital functions of an organism. Considering high linking of a docsazozin with proteins of plasma, use of dialysis is not effective.

Storage conditions
it is necessary to Store drug in the dry, protected from light place at
a temperature from +10 to + 25 °C.
To store in the place inaccessible for children!