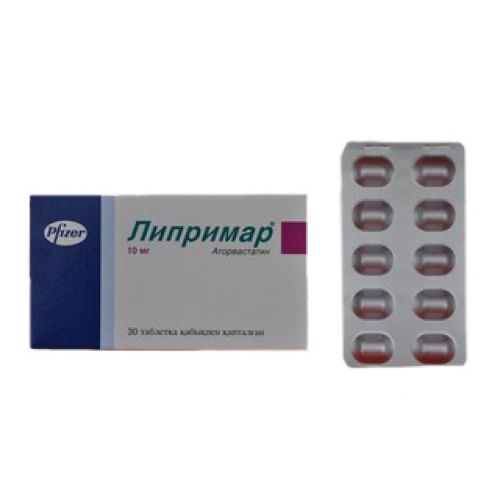 the Trade name
of Liprimar®

the Route of administration and doses
Before an initiation of treatment of Liprimarom® it is necessary to try to achieve control of a hypercholesterolemia by means of a diet, physical exercises and decrease in body weight from patients with obesity and also treatment of a basic disease. When prescribing drug the patient needs to recommend a standard gipokholesterinemichesky diet which he has to observe during treatment.
The drug is taken at any time, irrespective of meal. The dose of drug is varied by from 10 to 80 mg once a day, selecting it taking into account the initial maintenance of Hs-LPNP, the purpose of therapy and individual effect. In an initiation of treatment and/or during increase in a dose of Liprimara® it is necessary to control each 2-4 weeks the maintenance of lipids in blood plasma and as appropriate to adjust a dose.
Primary hypercholesterolemia and the combined (mixed) lipidemia: for most of patients – 10 mg once a day, therapeutic action is shown within 2 weeks and usually reaches a maximum within 4 weeks, at long-term treatment the effect remains.
Homozygous family hypercholesterolemia: 80 mg once a day (in most cases therapy led to decrease in maintenance of Hs-LPNP by 18-45%).
Heavy dislipidemiya at pediatric patients: the recommended starting dose – 10 mg once a day. The dose can be increased up to 80 mg a day according to the clinical answer and shipping. Doses have to be picked up individually taking into account the recommended therapy purpose.
Use for patients with liver diseases: see. Contraindications.
A dosage at patients with a renal failure: the disease of kidneys does not influence concentration of Liprimara® in blood plasma or extent of decrease in maintenance of Hs-LPNP therefore correction of a dose of drug is not required.
Use for elderly people: differences in safety, efficiency or achievement of the goals of hypolipidemic therapy at elderly people in comparison with the general population are not revealed.

Side effects
Often (from & gt, 1/100 to & lt, 1/10)
– a headache
– a nasopharyngitis
– a hyperglycemia
– throat and throat pain, nasal bleeding
– dyspepsia, nausea, a constipation, a meteorism, diarrhea
– an arthralgia, extremity pain, myotonia, myalgia, swelling of joints, a dorsodynia
– abnormal indicators of function of a liver, increase in a serumal kreatinfosfokinaza (KFK)
– allergic reactions
Infrequently (from ≥1/1000 to & lt, 1/100)
– a hypoglycemia, increase in body weight, anorexia
– dreadful dreams, insomnia
– dizziness, paresthesia, a hypesthesia, a dysgeusia, amnesia
– indistinct sight
– sonitus
– vomiting, pain in the upper and lower part of a stomach, an eructation
– pancreatitis, hepatitis
– urticaria, skin rash, an itching, an alopecia
– neck pain, muscular fatigue
– an indisposition, an asthenia, thorax pain, peripheral hypostasis, increased fatigue, fever
– emergence of leukocytes in urine
Is rare (from ≥1/10000 to & lt, 1/1000)
– thrombocytopenia
– peripheral neuropathy
– a disorder of vision
– a cholestasia
– a Quincke’s disease, bullous dermatitis including a polymorphic erythema, Stephens-Johnson’s syndrome and a toxic epidermal necrolysis
– a myopathy, a miositis, a rhabdomyolysis, a tendinopatiya sometimes complicated with a gap
Very seldom (from ≤1/10000)
– an anaphylaxis
– a hearing loss
– a liver failure
– a gynecomastia
Is unknown (it is impossible to determine by the available data).
– the immunomediated necrotizing myopathy

the Following side effects were revealed in patients of children’s age:
Often (from & gt, 1/100 to & lt, 1/10)
– a headache
– an abdominal pain
– increase in levels of alaninaminotranspherase and a serumal kreatinfosfokinaza (KFK)

At intake of some statines:
– sexual dysfunction
– a depression
– exclusively exceptional cases of an interstitial pulmonary disease, especially at long-term therapy
– diabetes: frequency will depend on existence or lack of risk factors (glucose in blood on an empty stomach of ≥5.6 mmol/l, BMI & gt, 30 kg/sq.m, the increased levels of triglycerides, arterial hypertension in the anamnesis)

Contraindications
– hypersensitivity to any of drug components
– an active disease of a liver or increase in activity of transaminases of serum (more than by 3 times in comparison with the upper bound of norm) not clear genesis
– pregnant women and the feeding women and also women of reproductive age who are not using adequate methods of contraception
– patients with a hereditary lactose intolerance, deficiency of enzyme of LAPP lactase, glucose galactose malabsorption

The special
instructions Action on a liver
After treatment of Liprimarom® noted considerable (more than by 3 times in comparison with the upper bound of norm) increase in serumal activity of ‘hepatic’ transaminases.
Increase in activity of ‘hepatic’ transaminases usually was not followed by jaundice or other clinical manifestations. At a dose decline of Liprimara®, temporary or full drug withdrawal the activity of ‘hepatic’ transaminases was restored to initial level. Most of patients continued reception of Liprimara® in a reduced dose without any consequences.
It is necessary to control indicators of function of a liver during all course of treatment, especially at emergence of clinical signs of damage of a liver. In case of increase in content of ‘hepatic’ transaminases, their activity should be controlled before achievement of limits of norm. If increase in activity of nuclear heating plant or ALT more than by 3 times in comparison with the upper bound of norm remains, the dose decline or drug withdrawal is recommended.
Action
Appointing Liprimar® in hypolipidemic doses in combination with derivatives of fibroyevy acid, erythromycin, immunodepressants, azolny antifungal drugs or niacin to skeletal muscles, the doctor has to weigh carefully expected advantage and risk of treatment and to regularly observe patients for the purpose of detection of pains or weakness in muscles, especially within the first months of treatment and during the periods of increase in a dose of any drug. In similar situations it is possible to recommend periodic determination of activity of KFK though such monitoring does not allow to prevent development of a heavy myopathy. Липримар® can cause increase in activity of a kreatinfosfokinaza.
At use of Liprimara®, exceptional cases of a rhabdomyolysis with the acute renal failure caused by a myoglobinuria and a myoglobinemia are described. Therapy of Liprimarom® should be stopped temporarily or to cancel completely at emergence of signs of a possible myopathy or presence of risk factor of developing a renal failure against the background of a rhabdomyolysis (for example, a heavy acute infection, arterial hypotension, serious operation, an injury, metabolic, endocrine and electrolytic disturbances and uncontrollable spasms).
Information for the patient: patients need to be warned that they should see immediately a doctor at appearance of inexplicable pains or weakness in muscles, especially if they are followed by an indisposition or fever.
With care to apply at the patients abusing alcohol and/or having a liver disease (in the anamnesis).
The hemorrhagic stroke
the Analysis of a research of 4731 patients without the coronary heart disease (CHD) who had a stroke or the tranzitorny ischemic attack in the previous 6 months and who began to accept Липримар® 80 mg revealed high percent of hemorrhagic strokes in the group accepting 80 mg of Liprimara® in comparison with placebo (55 on Liprimare® against 33 on placebo). At patients with a hemorrhagic stroke the increased risk of developing a repeated stroke was observed (7 on Liprimare® against 2 on placebo). However at the patients accepting Липримар® 80 mg the smaller quantity of strokes of any types (265 against 311) and smaller number of an ischemic heart disease was observed.
An interstitial pulmonary disease
At use of some statines, especially at long-term therapy, exclusively exceptional cases of an interstitial pulmonary disease were registered. The shown signs can include in dispnoe, unproductive cough and deterioration in the general state of health (fatigue, loss of body weight and fever). In the presence of suspicion about development in the patient of an interstitial pulmonary disease the therapy by statines should be cancelled.
Diabetes
Some data demonstrate that statines as a class, increase glucose level in blood and at some patients with high risk level of development of diabetes in the future can lead to the hyperglycemia level at which it is reasonable to begin treatment of diabetes. Nevertheless, this risk is outweighed by advantage of risk reduction for vessels when using statines and therefore should not be the reason of the termination of treatment by statines. Patients of risk group (glucose level on an empty stomach of 5.6-6.9 mmol/l, BMI & gt, 30 kg/sq.m, the increased level of triglycerides, arterial hypertension)
have to is under observation both clinically, and biochemical according to national recommendations.
Use at pregnancy and feeding
during treatment have to use a breast of the Woman of reproductive age adequate methods of contraception. Липримар® women of reproductive age can appoint only if pregnancy probability at them very low, and the patient is informed on possible risk for a fruit during treatment.
Features of influence of medicine on ability to run the vehicle and potentially dangerous mechanisms
Considering side effects of drug, it is necessary to be careful at control of motor transport and other potentially dangerous mechanisms.

Overdose
Symptoms: strengthening of side effects.
Treatment: there is no specific antidote for treatment of overdose of Liprimara®. In case of overdose as required it is necessary to carry out symptomatic treatment (on doctor’s orders). As drug actively contacts proteins of blood plasma, significant increase in clearance of Liprimara® at a hemodialysis is improbable.

Form of release and packing
of the Tablet, film coated, 10 mg, 20 mg, 40 mg and 80 mg. On 10 tablets in blister strip packaging from polyvinylchloride and aluminum foil. On 3 planimetric packs together with the instruction for medical use in the state and Russian languages in a cardboard pack.

the Owner of the registration certificate
of Pfizer HCP Corporation, the USA