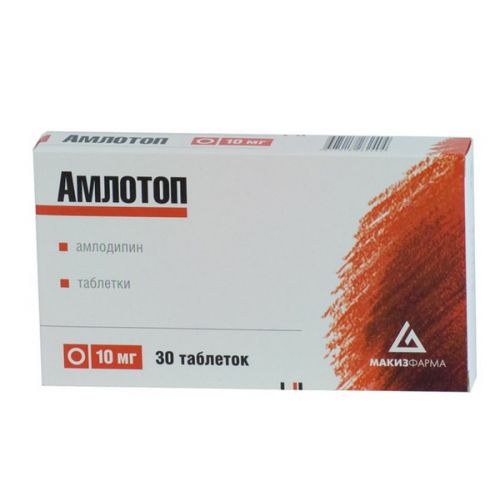 Pharmacokinetics Later properties of oral administration amlodipin is slowly absorbed from digestive tract. The average absolute bioavailability is 64%, the maximum concentration in blood serum is observed in 6-9 hours. Concentration of stable balance is reached after 7 days of therapy. Food does not influence absorption of an amlodipin. The average volume of distribution is 21 l/kg of body weight that indicates that the most part of drug is in fabrics, and rather smaller – in blood. The most part of the drug which is in blood (95%) contacts proteins of blood plasma.
Amlodipin is exposed to slow, but extensive metabolism (90%) in a liver with formation of inactive metabolites, has effect of the first passing through a liver. Metabolites have no significant pharmacological activity.
After single oral administration the elimination half-life (T1/2) varies from 31 to 48 hours, at repeated purpose of T1/2 makes about 45 hours. About 60% of the dose accepted inside are excreted with urine mainly in the form of metabolites, 10% in not changed look, and 20-25% – with a stake and also with breast milk. The general clearance of an amlodipin is 0.116 ml / with/kg (7 ml/min., 0.42 l/h/kg).
At elderly patients (65 years are more senior) the removal of an amlodipin is slowed down (T1/2 65 h), in comparison with young patients, however this difference has no clinical value. At patients with a liver failure the lengthening of T1/2 is supposed, At long appointment the daily cumulation in an organism will be higher (T1/2 up to 60 h). The renal failure has no significant effect on kinetics of an amlodipin. Drug gets through a blood-brain barrier. At a hemodialysis is not removed.
The pharmacodynamics
Derivative dihydropyridine – a blocker of slow calcium channels of the III generation, has anti-anginal and hypotensive effect. Contacting dihydropyridinic receptors, blocks calcium channels, reduces transmembrane transition of calcium ions to a cell (more in smooth muscle cells of vessels, than in cardiomyocytes). Anti-anginal action is caused by expansion of coronary and peripheral arteries and arterioles: in stenocardia reduces severity of ischemia of a myocardium, expanding peripheral arterioles, reduces the general peripheric vascular resistance, reduces preload of heart, reduces the need of a myocardium for oxygen. Expanding the main coronary arteries and arterioles, increases intake of oxygen in a myocardium (especially in vasospastic stenocardia), prevents development of a konstriktion of coronary arteries (including caused by smoking). At patients with stenocardia the single daily dose increases time of performance of physical activity, slows down development of stenocardia and ischemic depression of a segment of ST, reduces the frequency of attacks of stenocardia and consumption of nitroglycerine.
Renders long-term dose-dependent hypotensive effect. Hypotensive action is caused by direct vazodilatiruyushchy impact on unstriated muscles of vessels. In arterial hypertension the single dose provides clinically significant lowering of arterial pressure (ABP) for 24 h (in position of the patient lying and standing). Does not cause sharp decrease in the ABP, decrease in tolerance to physical activity, fraction of emission of a left ventricle. Reduces degree of a hypertrophy of a myocardium of a left ventricle, has anti-atherosclerotic and cardiotyre-tread effect in the coronary heart disease (CHD). Does not influence contractility and conductivity of a myocardium, does not cause reflex increase in the heart rate (HR), slows down aggregation of thrombocytes, increases glomerular filtration rate, possesses weak natriuretic effect. At a diabetic nephropathy does not increase severity of a microalbuminuria. Does not render adverse influences on a metabolism and lipids of blood plasma. Time of approach of effect – 2-4 hours, duration of effect is 24 hours.

Indications
– arterial hypertension (monotherapy or in a combination with other antihypertensive drugs)
– a stable angina of exertion, vasospastic stenocardia (Printsmetal’s stenocardia).

A route of administration and doses
Inside, the initial dose for treatment of arterial hypertension and stenocardia makes 5 mg of drug of 1 times a day. The dose as much as possible can be increased up to 10 mg once in day. In arterial hypertension the maintenance dose can be 2.5 – 5 mg a day.
In an angina of exertion and vasospastic stenocardia – 5-10 mg a day, once. For prevention of attacks of stenocardia – 10 mg/days.
To patients with a small weight, to patients of low growth, elderly patients, the patient with an abnormal liver function as antihypertensive, amlodipin appoint in an initial dose 2.5 mg, as anti-anginal means – 5 mg.
Change of a dose at co-administration with thiazide diuretics, beta blockers and inhibitors of the angiotensin-converting enzyme (ACE) is not required. Change of a dose is not required from patients with a renal failure.
Duration of treatment is established by the attending physician.

Side effects
– heartbeat, short wind, the profound lowering of arterial pressure, a faint, a vasculitis, hypostases (puffiness of anklebones and feet), inflows blood suit.
Seldom:
– disturbances of a rhythm (bradycardia, ventricular tachycardia, an atrial flutter), thorax pain, orthostatic hypotension
– a headache, dizziness, fatigue, drowsiness, change of mood, a spasm
– a loss of consciousness, a hypesthesia, nervousness
– paresthesias, a tremor, vertigo, an asthenia, an indisposition, insomnia, a depression, unusual dreams
– nausea, vomiting, pains in epigastriums
– the increase in level of hepatic transaminases and jaundice (caused by a cholestasia), pancreatitis, dryness in a mouth, a meteorism, a hyperplasia of gums, a constipation or diarrhea
– a pollakiuria, painful desires on urination, a nocturia, disturbance of sexual function (including decrease in potency)
– an arthralgia, arthrosis, myalgia (at prolonged use)
– a gynecomastia, a polylithemia, increase/decrease in body weight, thrombocytopenia, a leukopenia, a hyperglycemia, a disorder of vision, a diplopia, conjunctivitis, eye pain, a ring in ears, a dorsodynia, dispnoe, nasal bleeding, the increased sweating, thirst.
Very seldom:
– development or aggravation of heart failure, premature ventricular contraction, migraine
– an ataxy, apathy, agitation, amnesia
– gastritis, increase in appetite
– a dysuria, a polyuria
– a xerodermia, an alopecia, dermatitis, a purpura, discoloration of skin, a skin itching, rash (including erythematic, makulopapulezny rash, a small tortoiseshell), a Quincke’s disease
– a myasthenia
– cold clammy sweat, cough, rhinitis, a parosmiya, disturbance of flavoring feelings, accommodation disturbance, a xerophthalmia.

Contraindications
– hypersensitivity to an amlodipin and other derivatives of dihydropyridine
– unstable stenocardia, heavy attacks of stenocardia
– the profound arterial hypotension
– collapse, cardiogenic shock
– pregnancy and the period of a lactation
– age up to 18 years (the efficiency and safety are not established).
With care: an abnormal liver function, a sick sinus syndrome (the profound bradycardia, tachycardia), dekompensirovanny chronic heart failure, slight or moderate arterial hypotension, an aortal stenosis, a mitral stenosis, a hypertrophic subaortic stenosis, an acute myocardial infarction (and within 1 month after), diabetes, disturbance of a lipidic profile, advanced age.

Medicinal interactions
Inhibitors of microsomal oxidation increase Amlotop’s concentration in blood plasma, increasing risk of development of side effects, and inductors of microsomal enzymes of a liver reduce.
Hypotensive effect non-steroidal anti-inflammatory drugs, especially indometacin (a delay of sodium and blockade of synthesis of prostaglandins kidneys), alpha adrenostimulyatory weaken, estrogen (sodium delay), sympathomimetics.
Thiazide and loopback diuretics, beta blockers, verapamil, APF inhibitors and nitrates enhance anti-anginal and hypotensive effects.
Amiodaronum, quinidine, alfa1-adrenoblockers, antipsychotic medicines (neuroleptics) and blockers of slow calcium channels can strengthen hypotensive action.
Does not influence pharmacokinetic parameters of digoxin and warfarin.
Cimetidinum does not influence Amlotop’s pharmacokinetics.
At combined use with drugs of lithium strengthening of manifestations of their neurotoxicity (nausea, vomiting, diarrhea, an ataxy, a tremor, sonitus) is possible.
Drugs of calcium can reduce effect of blockers of slow calcium channels.
The procaineamide, quinidine and other medicines causing lengthening of an interval of QT enhance negative inotropic effect and can increase risk of considerable lengthening of an interval of QT.
Grapefruit juice can reduce Amlotop’s concentration in blood plasma, however this decrease so is not enough that significantly does not change action of an amlodipin.

Special instructions
during treatment the control of body weight and consumption of sodium, purpose of the corresponding diet is necessary.
Maintenance of hygiene of teeth and frequentation of the stomatologist is necessary (for prevention of morbidity, bleeding and a hyperplasia of gums).
The dosing mode for elderly patients same, as well as for patients of other age groups. At increase in a dose the careful observation of elderly patients is necessary.
Despite the absence of at blockers of slow calcium channels of a syndrome of cancellation, before the termination of treatment the gradual reduction of doses is recommended.
Amlotop does not affect plasma concentration of K+, glucose, triglycerides, the general cholesterol, uric acid, creatinine and nitrogen of uric acid.
The feature of influence of medicine on ability to run the vehicle or potentially dangerous mechanisms
was not messages about Amlotop’s influence on driving or work with mechanisms. Nevertheless, some patients mainly in an initiation of treatment, can have a drowsiness and dizziness. At their emergence the patient has to observe special precautionary measures during the driving and work with mechanisms.

Overdose
Symptoms: profound lowering of arterial pressure, tachycardia, excessive peripheral vazodilatation.
Treatment: gastric lavage, prescribing of activated carbon, maintenance of function of a cardiovascular system, control of indicators of function of heart and lungs, sublime position of extremities, control of volume of the circulating blood and a diuresis. For restoration of a tone of vessels – use of vasoconstrictive drugs (in the absence of contraindications to their use), for elimination of consequences of blockade of calcium channels – intravenous administration of a gluconate of calcium. The hemodialysis is not effective.

To Store storage conditions in the dry, protected from light place, at
a temperature not over +25 of 0C.
To store out of children’s reach!

3 years
not to use an expiration date after the date specified on packing.