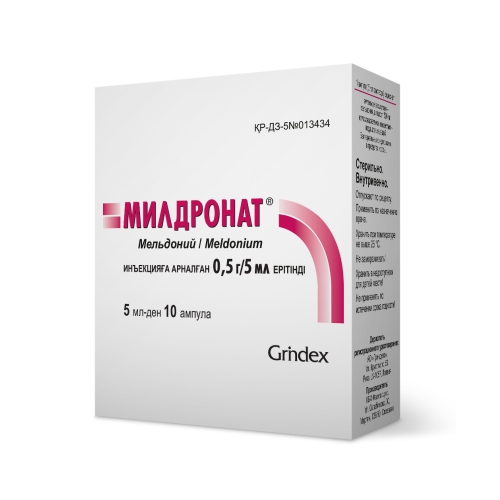 Bioavailability was increased in individuals with an increase in Cmax, area under the concentration-time plot (AUC) and elimination half-life (t1 / 2), in patients with liver cirrhosis and in patients with severe renal failure. When administered intravenously, the AUC after single and repeated doses of meldonium is different. These results indicate the possible accumulation of meldonium in the blood plasma.

Meldonium from the bloodstream quickly spreads into tissues; has a high affinity for heart tissue. Plasma protein binding increases with time after dose. Meldonium and its metabolites partially cross the placental barrier. Studies of the excretion of meldonium in human breast milk have not been conducted.

Meldonium is mainly metabolized in the liver.

The dose of meldonium should be reduced in elderly patients with impaired liver or kidney function, in whom bioavailability is increased.

Patients with impaired renal function, who have increased bioavailability, should reduce the dose. There is an interaction between renal reabsorption of meldonium or its metabolites (for example, 3-hydroxymeldonium) and carnitine, as a result of which the renal clearance of carnitine increases. There is no direct effect of meldonium, gamma butyrobetaine (GBB) and meldonium / GBB combination on the renin-angiotensin-aldosterone system.

Patients with impaired liver function, who have increased bioavailability, should reduce the dose of meldonium. Changes in liver activity indicators in humans after administration of doses of 400-800 mg were not observed. Possible fat infiltration into liver cells cannot be ruled out.

There is no data on the safety and efficacy of meldonium in children and adolescents under the age of 18, therefore the use of meldonium in this group of patients is contraindicated.

Meldonium is a structural analogue of the carnitine precursor gamma butyrobetaine (GBB), in which one of the carbon atoms is replaced by a nitrogen atom. Under conditions of increased load, meldonium restores the balance between the delivery and demand of cells for oxygen, eliminates the accumulation of toxic metabolic products in cells, protecting them from damage; also has a tonic effect. As a result of its use, the body acquires the ability to withstand stress and quickly restore energy reserves. Due to these properties, meldonium is used to treat various disorders of the cardiovascular system, blood supply to the brain, as well as to increase physical and mental performance. As a result of a decrease in the concentration of carnitine, GBB is intensively synthesized, which has vasodilating properties. In the case of acute ischemic damage to the myocardium, meldonium slows down the formation of a necrotic zone, shortens the rehabilitation period. In case of heart failure, it increases myocardial contractility, increases exercise tolerance, and reduces the frequency of angina attacks. In acute and chronic ischemic disorders of cerebral circulation, it improves blood circulation in the ischemic focus, promotes blood redistribution in favor of the ischemic area. In case of neurological disorders (after cerebrovascular accidents, brain surgery, head trauma, tick-borne encephalitis), it positively affects the recovery process of physical and intellectual functions during the recovery period.

In complex therapy in the following cases:

Intravenously. The use of the drug does not provide for special preparation before administration.
Due to the possible stimulating effect, the drug is recommended to be used in the first half of the day.

Elderly patients with liver and / or kidney disease should reduce the dose of meldonium.
Patients with impaired renal function

Since the drug is excreted from the body through the kidneys, a lower dose of meldonium should be used in patients with mild to moderate renal impairment.

Patients with mild to moderate hepatic impairment should use a lower dose of meldonium.

Meldonium can be used together with long-acting nitrates and other antianginal agents for the treatment of stable exertional angina pectoris, together with cardiac glycosides and diuretics for the treatment of heart failure.
Meldonium can be combined with anticoagulants, antiplatelet agents, antiarrhythmics and drugs that improve microcirculation.
Meldonium can enhance the effect of drugs containing glyceryl trinitrate, nifedipine, beta-blockers, other antihypertensive drugs and peripheral vasodilators.
In patients with chronic heart failure who are simultaneously taking meldonium and lisinopril to reduce symptoms, a positive effect of combination therapy (vasodilation of the main arteries, improvement of peripheral blood circulation and quality of life, reduction of psychological and physical stress) has been revealed.
When meldonium was used in combination with orotic acid to eliminate damage caused by ischemia / reperfusion, an additional pharmacological effect was observed.
As a result of the simultaneous use of Sorbifer and meldonium in patients with anemia caused by iron deficiency, the composition of fatty acids in erythrocytes improved.
Meldonium helps to eliminate pathological changes in the heart caused by azidothymidine (AZT), and indirectly affects the reactions of oxidative stress caused by AZT, leading to mitochondrial dysfunction. The use of meldonium in combination with AZT or other drugs for the treatment of acquired immunodeficiency syndrome (AIDS) has a positive effect on AIDS therapy.
In the ethanol-induced loss of balance reflex test, meldonium decreased sleep duration. During convulsions caused by pentylenetetrazole, a pronounced anticonvulsant effect of meldonium was established. In turn, when an alpha2-adrenergic blocker, yohimbine at a dose of 2 mg / kg and an inhibitor of nitric oxide synthase (COA) N- (G) -nitro-L-arginine at a dose of 10 mg / kg are used before therapy with meldonium, the anticonvulsant effect is completely blocked meldonia.
An overdose of meldonium can increase the cardiotoxicity caused by cyclophosphamide.
Carnitine deficiency resulting from the use of D-carnitine (the pharmacologically inactive isomer) -meldonium may increase the cardiotoxicity caused by ifosfamide.

Meldonium is protective against indinavir-induced cardiotoxicity and efavirenz-induced neurotoxicity.
It is not recommended to use it together with other drugs containing meldonium, as the risk of side effects may increase.

Patients with chronic liver and kidney disease should be careful with prolonged use (liver and / or kidney functions should be monitored).

Overdose cases are unknown, the drug is low-toxic and does not cause side effects hazardous to the patient’s health.
In case of low blood pressure, headaches, dizziness, tachycardia, and general weakness are possible. Treatment is symptomatic.

In case of severe overdose, it is necessary to monitor the functions of the liver and kidneys.
Due to the pronounced binding of the drug to proteins, hemodialysis is not essential.

Store at a temperature not exceeding 25 ° C.
Do not freeze!
Keep out of the reach of children!

Shelf life – 4 years
Do not use after the expiration date printed on the package.