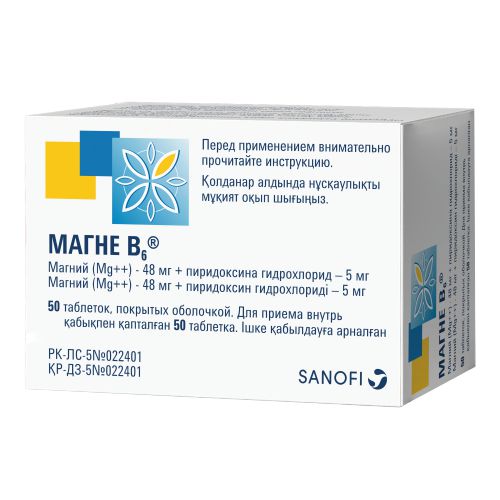 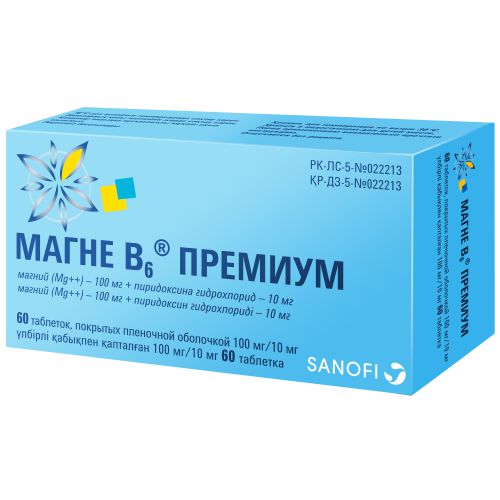 Magnesium is present in the human body at an average concentration of 17 mmol / kg, 99% of which is intracellular magnesium. From 40 to 50% of magnesium entering the body is absorbed in the small intestine and excreted in the urine.

Vitamin B6 promotes the transport of magnesium across membranes.

About half of the volume of intracellular magnesium is contained in bone tissue, and the rest is in smooth or striated muscles, parenchymal tissues and red blood cells.

Urine magnesium accounts for, on average, one third of the absorbed magnesium.

Pyridoxine is converted to the active forms pyridoxal phosphate and pyridoxamine phosphate, which are active metabolites of pyridoxine.

Magnesium, along with potassium, is the most important cation, which is mainly found inside cells. It is a cofactor in the functioning of a number of enzymes, for example, adenylate cyclase, phosphatases, pyrophosphatases, protein kinases, and acts as a catalyst in ATP-dependent enzymatic reactions. Magnesium inhibits the activity of ionotropic receptors and neuromuscular transmission. It is an integral component of the tissues of bones and teeth.

Magnesium deficiency increases neuronal and muscle irritability, causes tremors, ataxia, heart rhythm disturbances, and can cause tachycardia and a decrease in stress resistance.

Magnesium deficiency can be caused by:

– primary: due to congenital anomalies of magnesium metabolism;

Other conditions that can cause magnesium deficiency include:

– an increase in neuronal and muscle excitability (muscle spasm).

Pyridoxine is a water-soluble vitamin, which is a coenzyme of enzymes responsible for the metabolism of amino acids (reactions of decarboxylation, transamination, racemization, metabolism of sulfated and hydroxy amino acids, transformation of tryptophan – serotonin and methionine – cysteine), as well as for carbohydrate and fat-glucose 1-phosphate and linoleic acid).

The occurrence of the following symptoms may indicate a magnesium deficiency:

– signs of somatized anxiety in the form of gastrointestinal spasms or palpitations (without cardiac dysfunction);

The tablets should be taken after meals, without chewing, with plenty of water.

Adults and adolescents over 14 years old (weighing over 50 kg): 3-4 tablets per day, divided into 2-3 doses, with meals.

The tablet should not be administered to children under 6 years of age.

Treatment is carried out until symptoms of magnesium deficiency are relieved. Treatment should be discontinued as soon as blood magnesium levels return to normal. If the symptoms have not disappeared within 1 month, it is not recommended to continue taking the drug.

– severe violations of the water-salt balance

– simultaneous administration with levodopa should be avoided, since the activity of levodopa is inhibited by pyridoxine. When treating with levodopa, you should avoid taking any pyridoxine-containing drugs, unless peripheral dopadecarboxylase inhibitors are simultaneously prescribed.

These drugs inhibit the absorption of magnesium in the small intestine.

– oral tetracyclines, bisphosphonates, digitalis glycosides and sodium fluoride: Magne B6® Premium should be taken at least 3 hours after taking any of these drugs, as magnesium reduces their absorption.

– during long-term therapy with potassium-sparing diuretics, tubular reabsorption of magnesium may increase, which can lead to hypermagnesemia, especially in patients with renal insufficiency.

COATED TABLETS SHOULD BE USED FOR ADULTS AND CHILDREN OVER 6 YEARS OLD.

– In the case of severe magnesium deficiency, treatment should be started parenterally; parenteral administration is also recommended for patients with severe malabsorption syndrome.

– In case of concomitant calcium deficiency, first of all, the magnesium deficiency should be replenished, then calcium preparations are prescribed.

– In the case of mild to moderate renal failure, the patient should be prescribed reduced doses of the drug with careful monitoring of plasma magnesium levels (to exclude the risk of developing hypermagnesemia).

– An increase in the level of magnesium affects the work of the heart, slightly lowers blood pressure, slows down the conduction of heart impulses, can weaken cardiac activity, therefore this drug can only be prescribed to digitalized patients who have previously received cardiac glycosides: for example, digoxin, with atrial fibrillation, tachycardia, with heart failure, under appropriate medical supervision (ECG, blood pressure monitoring).

– WARNING: Given that one tablet contains 50.57 mg of lactose, this drug is contraindicated in patients with rare hereditary galactose intolerance, congenital lactase deficiency or glucose-galactose malabsorption.

– The main symptom of chronic dependence on pyridoxine is sensory axonal neuropathy, which occurs mainly with the use of high doses of pyridoxine taken for a long time

period of time (several months, and in some cases – for many years), however, it can also occur when taking the drug in low doses (50-300 mg / day). Symptoms: numbness and impaired sense of body position, trembling of the distal extremities, gradually progressive sensory ataxia. As a rule, this symptomatology is stopped after the drug is discontinued.

During pregnancy and lactation, daily doses should not exceed 250 mg / day for magnesium and 25 mg / day for vitamin B6. The recommended daily dose is no more than 2 tablets.

Long-term use of the drug in high doses can cause the development of hypermagnesemia. In patients with normal renal function, an overdose of oral magnesium does not cause toxic reactions. However, in the case of kidney failure, symptoms of magnesium poisoning may develop.

Treatment: In the treatment of respiratory failure and heart block, slow intravenous administration of 10-20 ml of 10% calcium gluconate solution should be used. Shown are rehydration, forced diuresis. In case of renal failure, hemodialysis or peritoneal dialysis is necessary.

Shelf life – 2 years
Do not use after the expiration date!

Be the first to review “MAGNE B6® (Magnesium + Pyridoxine)” Cancel reply