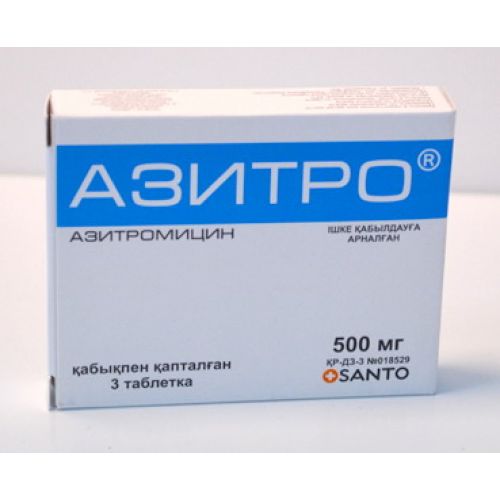 The instruction for medical use
of Azitro® medicine

the Trade name
of Azitro®

The description
of the Tablet, coated, an oval form, biconvex, color, white or white with a grayish shade, on one party is available risk.

Pharmacokinetics Absorption Bioavailability properties after oral introduction makes about 37%. Peak concentration in plasma are reached in 2-3 hours after intake of medicine.
Distribution
Azithromycin after oral administration is widely distributed in bodies and body tissues.
In pharmacokinetic researches it was shown that the concentration of azithromycin measured in fabrics are much higher (by 50 times), than measured in plasma that demonstrates that azithromycin in a significant amount contacts fabrics.
Linking with proteins of serum varies depending on concentration in plasma and is in range from 12% at 0.5 mkg/ml up to 52% at 0.05 mkg/ml of concentration in serum.
The average volume of distribution in an equilibrium state is 31.1 l/kg. Biotransformation and removal
Final plasma elimination half-life precisely reflects semi-removal from fabrics, 2 – 4 days. About 12% of intravenously entered dose of azithromycin are brought out of an organism without changes with urine during the next three days. High concentrations of invariable azithromycin were found mainly in bile. In bile the metabolites caused by N- and O-demethylation, dezoksaminy and aglikonovy circles of hydroxylation and also splitting of conjugates of a kladinoson were found. Comparison of results of highly effective liquid chromatography (VEZhH) and microbiological analyses showed that metabolites of azithromycin have no microbiological activity.
The pharmacodynamics
of Azitro® is the representative of subgroup of makrolidny antibiotics – azaleads, possesses a wide range of antibacterial action. Contacting 5OS – a subunit of ribosomes, suppresses synthesis of protein in a microbic cell.
Азитро® it is active concerning a row:
– gram-positive microorganisms: Streptococcus pneumoniae, Str.
pyrogenes, Str. agalactiae, streptococci
of groups C, F and G, Staphylococcus aureus, St. epidermidis, Corynebacterium diphtheriae.
– gram-negative microorganisms: Haemophilus influenza,
N. parainfluenzae and N. of ducrevi, Moraxella catarrhalis, Bordetella pertussis and V.
of parapertussis, Neisseria gonorrhoeae and N.meningitidis, Brucella melitensis,
Helicobacter pylori, gardnerella vaginalis.
– anaerobic microorganisms: Clostridium spp., Peptostreptococcus spp. and
Peptococcus spp.
– intracellular and other microorganisms: Legionella pneumophila,
Chamydia trachomatis and S. of pneumoniae, Mycoplasma pneumoniae,
Mycoplasma hominis, Mycoplasma avium, Ureaplasma urealyticum,
Lysteria monocytogenes, Treponema pallidum, Borrelia burgdorferi, Toxoplasma gondii.
Cross azithromycin resistance about erythromycin – resistant gram-positive strains was noted. The majority of strains of Enterococcus faecalis and Methicillinum – resistant staphylococcus are resistant to azithromycin.
Azitro is inactive concerning the gram-positive bacteria resistant to erythromycin.

Indications
Infectious and inflammatory the diseases caused by microorganisms, sensitive to drug:
– the tonsillitis, pharyngitis, sinusitis, tonsillitis, average otitis
– chronic bronchitis in an aggravation stage, extra hospital or
hospital pneumonia
– the ugly face, impetigo which are again infected a dermatosis, Lyme’s disease (for treatment of an initial stage)
– the diseases of a stomach and a duodenum associated with
Helicobacter pylori (as a part of combination therapy)
– diseases, sexually transmitted, a gonorrheal and not gonorrheal urethritis and/or a cervicitis

the Route of administration and doses
use Drug inside in 1 hour prior to or in 2 hours after a meal.
Adult:
In infections of upper and lower parts of airways, in infections of skin and soft tissues: 500 mg/days for 1 reception within 3 days.
In Lyme’s disease for treatment of an initial stage: 1 g in the first day and 500 mg/days from 2 to 5 day.
In the diseases of a stomach and duodenum associated with Helicobacter pylori: 1000 mg/days within 3 days as a part of combination therapy.
In diseases, sexually transmitted: an uncomplicated urethritis / cervicitis – once 1000 mg.
Children are 12 years old and are more senior:
Appoint tablets of 500 mg to children of 12 years and more than 45 kg 1 times/day within 3 days or in the first day on 10 mg/kg of body weight, then on 5 – 10 mg/kg of body weight a day within 3 days are more senior with body weight. At body weight less than 45 kg it is necessary to take other dosage form.
At treatment of the first stage of a disease of Lyme: the dose makes 20 mg/kg of body weight in the first day and on 10 mg/kg of body weight from 2 to 5 day.
In case of the admission of reception of one dose of drug it is necessary to accept the passed dose as soon as possible, and the subsequent – with breaks at 24 o’clock.
Older persons and at patients with impaired renal function have no need to change a dosage.

Medicinal interactions
Antacids (aluminum and magniysoderzhashchy), ethanol and food slow down and reduce absorption of Azitro®.
At joint prescribing of warfarin and Azitro® (in usual doses) changes of a prothrombin time it is not revealed, however, considering that in interaction of macroleads and warfarin strengthening of anti-coagulative effect is possible, careful control of a prothrombin time is necessary for patients.
Digoxin: Азитро® increases concentration of digoxin.
Ergotamine and dihydroergotamine: strengthening of toxic action (vasospasm, dizesteziya).
To triazoles: Азитро® causes decrease in clearance and strengthening of pharmacological action of a triazolan.
Азитро® slows down removal and increases concentration in blood plasma and toxicity of Cycloserinum, indirect anticoagulants, Methylprednisolonum, a felodipin and also the medicines which are exposed to microsomal oxidation (carbamazepine, terfenadin, cyclosporine, hexobarbital, ergot alkaloids, valproic acid, Disopyramidum, Bromocriptinum, Phenytoinum, oral hypoglycemic means, theophylline, etc. ksantinovy derivatives) – at the expense of inhibition of microsomal oxidation in hepatocytes. Linkozamina weaken efficiency of Azitro®, tetracycline and chloramphenicol – strengthen.

Special instructions
It is reported about the following side effects at reception of antibiotics of group of macroleads: ventricular arrhythmia, including ventricular tachycardia and torsade de pointes (ventricles), at patients with the interval extended with QT.
Extremely seldom against the background of treatment AziparomTM the persons which had arrhythmia in the anamnesis can have a torsade de pointes (ventricles) and the subsequent myocardial infarction.
The extended warm repolarization and an interval of QT which increased risk of developing cardiac arrhythmia and trembling/ventricular fibrillation were observed at treatment by other makrolidny antibiotics. The similar effect of azithromycin cannot be excluded completely at patients with the increased risk of the extended warm repolarization.
Features of influence of medicine on ability to run the vehicle or potentially dangerous mechanisms
Considering side effects of medicine it is necessary to be careful at control of motor transport and potentially dangerous mechanisms.

A form of release and packing
On 3 tablets in blister strip packaging from a film of polyvinylchloride and aluminum foil.
On 1 blister strip packaging together with the approved instruction for medical use in the state and Russian languages place in a pack from cardboard for a retail container or chrome ersatz.
It is allowed information from the instruction for use in the state and Russian languages to apply on a pack.

To Store storage conditions in the dry, protected from light place at a temperature not above 30 °C.
To store out of children’s reach!

The owner of the registration certificate
of JSC Khimfarm, the Republic of Kazakhstan