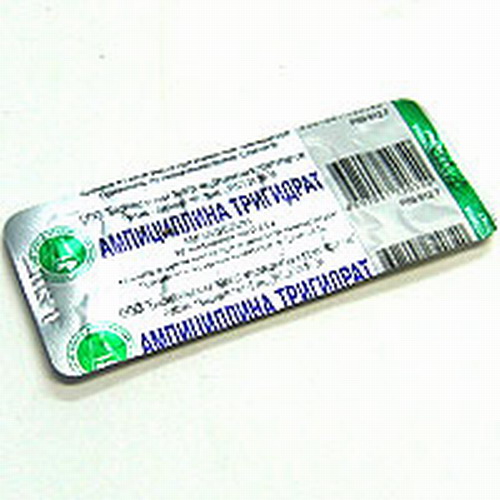 name Ampicillin Dosage Form
of the Tablet of 0.25 g

The description
of the Tablet of white color, round shape, with a biconvex surface, with risky.

Pharmacokinetics Absorption properties after intake fast, high, bioavailability – 40%, time of achievement of the maximum concentration at reception of 500 mg – 2 hours, the maximum concentration – 3 – 4 mkg/ml. Communication with proteins of plasma – 20%. Elimination half-life – 1 – 2 hour. It is evenly distributed in bodies and body tissues, it is found in therapeutic concentration in pleural, peritoneal, amniotic and synovial liquids, liquor, contents of blisters, urine (high concentrations), a mucous membrane of intestines, bones, a gall bladder, lungs, tissues of female genitals, bile, in a bronchial secret (in a purulent bronchial secret accumulation weak), paranasal sinuses, liquid of a middle ear (at its inflammation), saliva, fruit fabrics. Badly gets through a blood-brain barrier (the permeability increases at inflammation of a meninx). It is removed mainly by kidneys (70 – 80%), in urine very high concentrations of not changed antibiotic, partially – with bile, at nursing mothers – with milk are created. Does not kumulirut. Is removed at a hemodialysis.
Pharmacodynamics
Semi-synthetic penicillin, broad spectrum of activity, bakteritsiden. Kislotoustoychiv. Suppresses synthesis of a cell wall of bacteria.
It is active concerning gram-positive (alpha and beta and hemolytic streptococci, Streptococcus pneumoniae, Staphylococcus spp., Bacillus anthracis, Clostridium spp.).
It is moderately active against the majority of enterococci, including Enterococcus faecalis, Listeria spp., and gram-negative (Haemophilus influenzae, Neisseria meningitidis, Proteus mirabilis, Yersinia multocida (before Pasteurella), many types of Salmonella spp., Shigella spp., Escherichia coli, Chlamydia trachomatis) microorganisms, aerobic asporous bacteria.
It is inefficient concerning penitsillinazoprodutsiruyushchy strains of Staphylococcus spp., all strains of Pseudomonas aeruginosa, the majority of strains of Klebsiella spp. and Enterobacter spp.

The route of administration and doses
Inside, the adult – on 0.25 g 4 times a day for 0.5-1 h to food with a small amount of water, if necessary increase a dose to 3 g/days.
Infections of digestive tract and bodies of an urinogenital system: 0.5 g 4 times a day.
To children 6 years are more senior appoint 1 g a day. The daily dose is divided into 4-6 receptions.
Duration of treatment depends on disease severity (of 5-10 days).

Side effects
Sometimes:
– peeling of skin, an itching, urticaria, rhinitis, conjunctivitis, a Quincke’s edema
– dysbacteriosis, an abdominal pain, nausea, vomiting
Seldom:
– fever, an arthralgia, an eosinophilia, erythematic and makulopapulezny rash, exfoliative dermatitis, a multiformny exudative erythema, including Stephens-Johnson’s syndrome, reactions similar to a serum disease
– stomatitis, gastritis, dryness of a mucous membrane of an oral cavity, change of taste, diarrhea, a glossitis, an abnormal liver function, moderate increase in activity of ‘hepatic’ transaminases, a pseudomembranous coloenteritis
– agitation or aggression, uneasiness, confusion of consciousness, change of behavior
– a leukopenia, a neutropenia, thrombocytopenia
Very seldom,
– an acute anaphylaxis
– a depression, spasms (at therapy by high doses)
– an agranulocytosis, anemia
Other side reactions
Sometimes:
– candidiasis of a vagina
it is rare:
– interstitial nephrite, a nephropathy, superinfection (especially at patients with chronic diseases or reduced resistance of an organism)
– not allergic ampitsillinovy rash (can disappear without drug withdrawal)

Contraindications
– hypersensitivity (including to other penicillin, cephalosporins, karbapenema)
– an infectious mononucleosis
– a lymphoid leukosis
– a liver failure
– digestive tract diseases in the anamnesis (especially the colitis connected with use of antibiotics)
– the lactation period
– children’s age up to 6 years

Special instructions
in the course of treatment the systematic control of function of kidneys, a liver and a picture of peripheral blood is necessary. Patients with a renal failure need the correction of the mode of dosing recommended by the doctor according to values of clearance of creatinine. Development of superinfection due to growth of microflora, insensitive to it, is possible that demands corresponding change of antibacterial therapy.
At use of high doses for patients with a renal failure perhaps toxic action on the central nervous system.
At use of ampicillin for patients with bacteremia (sepsis) reaction of a bacteriolysis (Yarisha-Gerksgeymer’s reaction) is possible.
At treatment of the slight diarrhea arising against the background of course treatment it is necessary to avoid the antidiarrheal medicines reducing an intestines vermicular movement, it is possible to use a kaolin – or attapulgitsoderzhashchy antidiarrheal medicines, drug withdrawal is shown. In heavy diarrhea it is necessary to see a doctor. Treatment has to
press close surely a pro-dale for 48 – 72 more hours after disappearance of clinical signs of a disease.
At the first symptoms of an allergy drug is cancelled and carry out the desensibilizing therapy.
With care:
– bronchial asthma
– a pollinosis and other allergic diseases
– a renal failure
– bleedings in the anamnesis
Pregnancy
Use at pregnancy is possible when the advantage for mother exceeds potential risk for a fruit.
The feature of influence of medicine on ability to run the vehicle or potentially dangerous mechanisms
during treatment needs to be careful at control of vehicles and occupation other potentially dangerous types of activity demanding the increased concentration of attention and speed of psychomotor reactions.

Overdose
Symptoms: manifestations of toxic action on the central nervous system (especially at patients with a renal failure), nausea, vomiting, diarrhea, disturbance of water and electrolytic balance (as a result of vomiting and diarrhea).
Treatment: gastric lavage, activated carbon, salt laxatives, medicines for maintenance of water and electrolytic balance and symptomatic. It is removed by means of a hemodialysis.

Form of release and packing
of the Tablet of 0.25 g.
On 10 tablets place in blister strip packaging from a film of the polyvinylchloride and printing aluminum foil varnished or papers with a polyethylene covering.
1, 2 blister strip packagings together with the instruction for medical use in the state and Russian languages place in a pack from cardboard.

Name and country of the owner of the registration certificate
of JSC Biosintez, Russian Federation.

The address of the organization accepting in the territory of the Republic of Kazakhstan claims from consumers on quality of products (goods)
of JSC Biosintez,
Russian Federation 440033, Penza, Druzhby St., 4, ph. / fax (8412) 57-72-49,
e-mail: