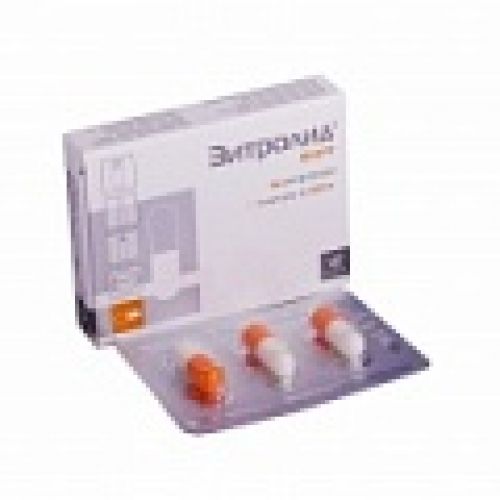 the Trade name
of Zitrolid® forte

name Azithromycin Dosage Form
of the Capsule of 500 mg

Description
of Capsule No. 00, body white, lid orange. Contents of capsules – powder from color, white to white with a yellowish shade, inclined to balling up.

Pharmacokinetics Absorption properties – high, kislotoustoychiv, is lipophilic. The bioavailability after single dose of 500 mg – 37% (effect of ‘the first passing’ through a liver), the maximum concentration (Cmax) after oral administration of 500 mg – 0.4 mg/l, time of achievement of the maximum concentration (TCmax) – 2.5-2.9 h, in fabrics and cells concentration is 10-50 times higher, than in blood serum, distribution volume – 31.1 l/kg. Easily passes gistogematichesky barriers. Well gets into airways, urinogenital bodies and fabrics, into a prostate, into skin and soft tissues, collects in the environment with low pH, in lysosomes (that is especially important for an eradikation of intracellularly located activators). It is transported also by phagocytes, polymorphonuclear leukocytes and macrophages. Gets through cell membranes and creates high concentrations in them.
Concentration in the centers of an infection it is reliable above (for 24-34%), than in healthy fabrics, and correlates with severity of inflammatory hypostasis. In the center of inflammation remains in effective concentration within 5-7 days after reception of the last dose. Communication with proteins of plasma – 7-50% (it is inversely proportional concentration in blood).
In a liver it demetilirutsya, the formed metabolites are not active. Isoenzymes of CYP3A4, CYP3A5, CYP3A7 which inhibitor it is participate in metabolism of drug. Plasma clearance – 630 ml/min.: elimination half-life (T1/2) between 8 and 24 h after reception makes 14-20 h, T1/2 in the range from 24 up to 72 h – is removed with bile in not changed look, 6% 41 h 50% – kidneys.
Meal significantly changes pharmacokinetics: Cmax decreases by 52%, the area under a pharmacokinetic curve concentration time (AUC) – for 43%.
At elderly men (65-85 years) the pharmacokinetic parameters do not change, at women Cmax increases (by 30-50%).
A pharmacodynamics
Azithromycin – a bacteriostatic antibiotic of a broad spectrum of activity from group of macroleads azaleads. Possesses a wide range of antimicrobic action. The mechanism of effect of azithromycin is connected with suppression of synthesis of protein of a microbic cell. Contacting a ribosome 50S-subunit, oppresses to a peptidtranslokaz at a stage of broadcasting and suppresses protein synthesis, slowing down growth and reproduction of bacteria. In high concentrations has bactericidal effect.
Has activity concerning a row gram-positive, gram-negative, anaerobe bacterias, intracellular and other microorganisms.
Microorganisms can initially be resistant to action of an antibiotic or can gain resistance to it.
A scale of sensitivity of microorganisms to azithromycin (The Minimum Inhibiting Concentration (MIC), mg/l):

Streptococcus A, B, C, G

Indications
the Infectious and inflammatory diseases caused by microorganisms, sensitive to azithromycin:
– upper respiratory tract infection and ENT organs: pharyngitis, tonsillitis, sinusitis, average otitis
– lower respiratory tract infections: pneumonia (including atypical, exacerbation of chronic pneumonia), bronchitis (including sharp, aggravation of chronic)
– infections of skin and soft tissues: the ugly face, impetigo which are again infected a dermatosis
– infections of an urogenital path: a gonorrheal and not gonorrheal urethritis, a cervicitis
– an initial stage of a disease Laima (borreliosis) – the migrating erythema (erythema migrans)

the Route of administration and doses
Inside, for 1 h to or in 2 h after a meal of 1 times a day.
In infections of upper and lower parts of airways, ENT organs, skin and soft tissues – 500 mg/days for 1 reception within 3 days (a course dose – 1.5 g).
In acute infections of urinogenital bodies (uncomplicated urethritis or a cervicitis) – once 1 g.
In Lyme’s disease – for treatment of the I stage (erythema migrans) – 1 g in the first day and 500 mg daily from 2 to 5 day (a course dose – 3 g).
At treatment of pneumonia appoint 500 mg daily within 7-10 days, begin reception right after the end of use of an intravenous dosage form (the recommended dose at intravenous administration of 500 mg within not less than 2 days once a day).

Side effect
– diarrhea, nausea, an abdominal pain, a meteorism, vomiting, a melena, a constipation, anorexia, gastritis, a candidiasis of a mucous membrane of an oral cavity, dyspepsia
– cholestatic jaundice, increase in activity of ‘hepatic’ transaminases,
– a hyperbilirubinemia, hepatitis, pancreatitis, pseudomembranous colitis, an abnormal liver function, a liver failure (in rare instances with a lethal outcome, generally against the background of an abnormal liver function), liver necrosis, fulminantny hepatitis
– heart consciousness, thorax pain, a lowering of arterial pressure, increase in an interval Q-T, arrhythmia like pirouette, ventricular tachycardia
– dizziness, a headache, vertigo
– drowsiness, paresthesia, disturbance of flavoring feelings, a hypesthesia, aggression, a syncope, spasms, psychomotor hyperactivity, loss of sense of smell, flavoring feelings
– a myasthenia
– disturbance of clearness of visual perception, deafness, sonitus
– increase in residual nitrogen of urea, a vaginal candidiasis, increase in concentration of creatinine in blood plasma, interstitial nephrite, an acute renal failure
– a leukopenia, a neutropenia, thrombocytopenia, a lymphopenia, an eosinophilia, hemolytic anemia
– rash, urticaria, an itching of skin, a Quincke’s disease, a mnogoformny erythema, Stephens-Johnson’s syndrome, a toxic epidermal necrolysis, reaction of hypersensitivity, an acute anaphylaxis
– a hyperglycemia, an arthralgia, an asthenia, a photosensitization, conjunctivitis, change of taste, weakness, peripheral hypostases, an indisposition.

Contraindications
– hypersensitivity to azithromycin (including to other macroleads), to drug components
– a heavy renal failure (the clearance of creatinine (CC) less than 40 ml/min.)
– a heavy liver failure (class B above on a scale of Chayld-Pyyu)
– the lactation period
– a concomitant use with ergotamine and dihydroergotamine
– children’s and teenage age up to 18 years

Special instructions
With care arrhythmia, including predisposition ment of arrhythmia and lengthening of an interval of Q-T (risk of developing ventricular arrhythmias and lengthening of an interval of Q-T), a renal failure (KK more than 40 ml/min.), a liver failure (below class B on a scale of Chayld-Pyyu), a myasthenia, a concomitant use with terfenadiny, warfarin, digoxin.
In case of the admission of reception of a dose it is necessary to accept the passed dose as soon as possible, and the subsequent – at an interval of the 24th hour.
Зитролид® forte it is necessary to accept in 1 hour prior to or 2 hours after intake of antiacid medicines.
To take with caution to patients with a liver failure because of a possibility of development of fulminantny hepatitis and a heavy liver failure at such patients. In the presence of symptoms of an abnormal liver function (quickly accruing asthenia, jaundice, urine darkening, tendency to bleedings, hepatic encephalopathy) therapy of Zitrolidom® forte it is necessary to stop and conduct a research of a functional condition of a liver.
In a moderate renal failure (KK more than 40 ml/min.) use of azithromycin should be carried out under control of function of kidneys.
The concomitant use of Zitrolida® forte with derivatives of ergotamine and dihydroergotamine because of possible development of an ergotism is contraindicated.
At drug use, both against the background of reception, and in 2-3 weeks after the termination of treatment the development of the diarrhea caused by Clostridium difficile (pseudomembranous colitis) is possible. In mild cases there is enough cancellation of treatment and use of yonoobmenny pitches (Colestyraminum, kolestipol), in hard cases compensation of loss of liquid, electrolytes and protein, prescribing of Vancomycinum, bacitracin or metronidazole is shown. It is impossible to apply the medicines braking an intestines vermicular movement.
As lengthening of an interval of Q-T at the patients receiving macroleads, including azithromycin, at use of Zitrolida® is possible forte, it is necessary to be careful at patients with the known risk factors of lengthening of an interval of Q-T: advanced age, disturbance of electrolytic balance (hypopotassemia, a hypomagnesiemia), a syndrome of congenital lengthening of an interval of Q-T, a heart disease (heart failure, a myocardial infarction, bradycardia), a concomitant use of the medicines capable to extend Q-T interval (including antiarrhytmic Ia and III medicines of classes, tricyclic and tetracyclic antidepressants, neuroleptics, ftorkhinolona).
At use of azithromycin the development of a myasthenic syndrome or aggravation of a myasthenia is possible.
Pregnancy
of Zitrolid® forte gets through a placenta. Use at pregnancy is possible only if the expected advantage for mother exceeds potential risk for a fruit.
The feature of influence of medicine on ability to run the vehicle or potentially dangerous mechanisms
during treatment needs to be careful at control of vehicles and occupation other potentially dangerous types of activity demanding the increased concentration of attention and speed of psychomotor reactions.

To Store storage conditions the place protected from light at a temperature not higher than 25 0 C.
To store out of children’s reach!

the Owner of the registration certificate
Valenta Pharmatsevtika Open joint stock company
Russian Federation 141101, Shchyolkovo, Moscow Region, Fabrichnaya St., 2
the Address of the organization accepting in the territory of the Republic of Kazakhstan claims from consumers on quality of products (goods) Representative office of JSC Valenta Pharmatsevtika in RK Republic of Kazakhstan, 050009, Almaty, the ave. of Abay, ug. Radostovts St., 151/115, business center Ala Tau, office No. 702telefon/fax 8 (727) 334-15-52Электронный address:
asia@valentapharm.com