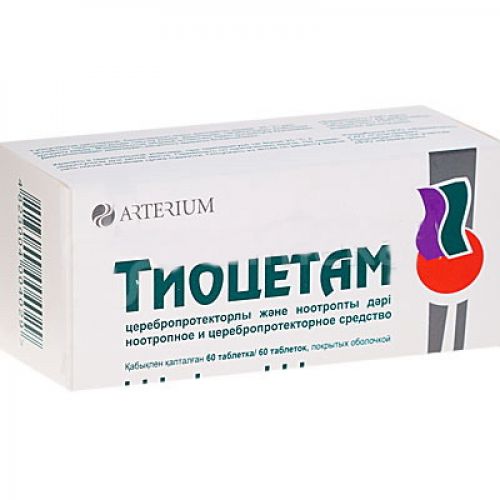 Thiocetam is a combination drug and belongs to the group of cerebroactive drugs, has anti-ischemic, antioxidant, membrane-stabilizing and nootropic properties.

The drug improves the integrative and cognitive activity of the brain, increases the efficiency of the learning process, helps to eliminate the symptoms of amnesia, increases the performance of short-term and long-term memory.

The pharmacological effect of the drug is due to the mutually potentiating action of thiotriazoline and piracetam.

The drug is able to accelerate the oxidation of glucose in the reactions of aerobic and anaerobic oxidation, normalize bioenergetic processes, increase the level of ATP, and stabilize metabolism in brain tissues.

The drug inhibits the formation of reactive oxygen species, reactivates the antioxidant system of enzymes, especially superoxide dismutase, inhibits free radical processes in brain tissues during ischemia, improves the rheological properties of blood by activating the fibrinolytic system, stabilizes and reduces the zones of necrosis and ischemia, respectively.

– vascular, toxic and traumatic encephalopathy in the recovery period

The duration of treatment is determined by the doctor in each individual case separately, depending on the course of the disease.

With transient and chronic disorders of cerebral circulation and during the rehabilitation period after ischemic and hemorrhagic stroke, 1 tablet 3 times a day for 25-30 days. Tiocetam tablets are prescribed 30 minutes before meals. The course of treatment ranges from 2-3 weeks to 3-4 months.

For the treatment of diabetic encephalopathy, 1 tablet is prescribed 3 times a day for 45 days.

When using the drug Thiocetam, the following adverse reactions may occur

from the side of the cardiovascular system: tachycardia, arterial hypertension;

from the respiratory system, chest organs and mediastinum: shortness of breath, suffocation;

Thiocetam should not be administered with drugs that have an acidic pH. Due to the presence of piracetam, the effect of antidepressants and antianginal drugs is enhanced. In high doses (9.6 g/day), piracetam increases the effectiveness of acenocoumarol in patients with venous thrombosis, but this effect is not observed when using therapeutic doses of the drug. There is no interaction of piracetam with clonazepam, phenobarbital, phenytoin, sodium valproate. The simultaneous use of piracetam and thyroid hormones (T3 + T4) can cause irritability, disorientation, sleep disturbance. It is unlikely that piracetam will interact with drugs that are biotransformable by enzymes of the P450 complex.

Simultaneous reception with enalapril, captopril increases the risk of adverse reactions from the cardiovascular system.

Simultaneous administration with alcohol does not affect the level of concentration of piracetam in the blood serum.

With caution, the drug is prescribed to patients with chronic renal failure. Thiocetam affects platelet aggregation, so it should be used with caution in patients with impaired hemostasis, during surgical interventions.

With caution, the drug should be used in elderly people with cardiovascular pathology due to the fact that the adverse reactions described above are more common in this group of patients.

Allergic reactions are more common in people prone to allergies.

There are currently no such messages. However, caution should be exercised when using Thiocetam to persons driving vehicles or working with dangerous mechanisms, given the possible adverse reactions from the nervous system.

Symptoms: when using therapeutic doses, an overdose is not possible. However, if you deviate from the doses recommended by your doctor, you may experience or increase the side effects of the drug (excitation, sleep disturbance, dyspepsia).

Treatment: In such cases, stop using the drug and prescribe symptomatic treatment.

Store in a dry, dark place at temperatures between 15°C and 25°C.
Keep out of the reach of children!
Shelf life – 3 years
Do not use after the expiry date stated on the package.