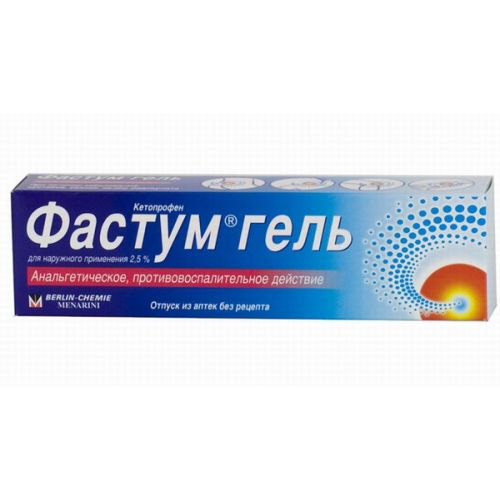 the Trade name
of Fastum® gel

The description
Colourless, almost transparent gel of mucous consistence with a fragrant smell.

Pharmacokinetics At properties drawing on skin absorption happens slowly. As a result of dermal absorption of 50 – 150 mg of ketoprofen the content of active ingredient in plasma later reaches 5-8 hours 0.08 – 0.15 mkg/ml. Linking with proteins of plasma – from 60 to 90%. Removal, generally with urine and in the form of glyukoronid.
A pharmacodynamics
In specially picked up combination with excipients, Fastum® gel, getting through skin, influences an affected area and therefore reduces local inflammation and relieves pain in the painful centers of joints, sinews, ligaments and muscles.

Indications
– muscle, back, bones pain or joints of rheumatic or traumatic origin: bruises, traumatic stretchings, sprains and muscles, muscle tension of a neck, a lumbago

the Route of administration and doses
of Fastum® gel it is necessary to apply locally. It is applied on the struck area by 1–3 times day. For the best absorption the putting gel should be accompanied with easy rubbing in.
Tuba: at one applique the strip of gel 5-10 cm long (2 g) is put.
Doser: to press twice the doser of pump type.
Duration of treatment is defined by the doctor

Side effects
Sometimes (from 0.1% to 1%)
– an erythema, an itching, eczema
Seldom (from 0.01% to 0.1%)
– reactions of a photosensitization, bullous dermatitis, a small tortoiseshell
Very seldom (less than 0.01%), including separate cases
– anaphylactic reactions, reactions of hypersensitivity
– a round ulcer, gastrointestinal bleeding, diarrhea
– contact dermatitis, burning sensation, a Quincke’s disease
– aggravation of renal dysfunction or renal failure
Was reported about local skin reactions which could go out of the site of putting drug subsequently. Cases of more significant reactions, such as bullous or fliktenulezny eczemas capable to extend and gain generalized character belong to unusual occurrences.
Other side effects of anti-inflammatory drugs (hypersensitivity, disturbances from digestive tract and kidneys) depend on penetration of the operating component through skin and, therefore, on amount of the applied gel, the area of the processed surface, integrity of integuments, duration of treatment and use of occlusive bandages.
Elderly patients are more subject to emergence of side reactions on non-steroidal anti-inflammatory drugs.

Contraindications
– any reactions of a photosensitization in the anamnesis
– the known reactions of hypersensitivity, for example, asthma symptoms, allergic rhinitis or a small tortoiseshell which arose at use of ketoprofen, the fenofibrat, thiapro-foehn acid, acetylsalicylic acid or other non-steroidal anti-inflammatory drugs (NPVS)
– existence in the anamnesis of skin manifestations of an allergy at use of ketoprofen, thiapro-foehn acid, the fenofibrat, UF-blockers or perfumery products.
– influence of sunshine (even diffused light) or UF-radiation during treatment by gel and within 2 weeks after its termination
– hypersensitivity to any of drug excipients
– children’s age up to 12 years
– pregnancy and the period of a lactation

Medicinal interactions
of the Message about interaction of Fastuma® of gel with other medicines did not come to sunbeds. Nevertheless, careful control of the patients taking the coumarinic drugs as
non-steroidal anti-inflammatory drugs can enhance gipoprotrombinemichesky effect and risk of bleeding at combined use with oral anticoagulants is recommended.

The special
instructions Gel should be applied with care at patients from a warm, hepatic or renal nedostatochnostyama. It was reported about isolated cases of the systemic side effects connected with damage of kidneys. Patients with a heavy renal failure should apply the gel containing ketoprofen with care.
The hypersensitivity or asthma can result topical administration of large amounts of drug in such system effects as, for example.
It is not necessary to exceed the recommended treatment duration as eventually risk of developing contact dermatitis and reactions of a photosensitization grows.
Besides, it is necessary to observe the following precautionary measures:
· after each use of drug it is necessary to wash hands carefully
· at development of any skin reactions including connected with the accompanying use of the products containing oktokrilen the treatment by gel should be stopped immediately
· in order to avoid development of a photosensitization of skin it is recommended to protect clothes those areas on which drug is applied — during treatment and within two weeks after its termination
· use of gel should not be combined with carrying an occlusive bandage
· gel it is not necessary to apply on sites of skin where there are signs of defeat, for example, eczema, an acne, infectious process or open wounds
Use in pediatrics
Due to the lack of these clinical trials at children 12 years are younger than Fastum® gel is not recommended to be applied.
Pregnancy and the period of a lactation
As researches of safety of use of ketoprofen for pregnant women were not conducted, in the first and second trimester of pregnancy of its use it is necessary to avoid.
All inhibitors of synthesis of prostaglandins, including ketoprofen, cause toxic damage to a cardiopulmonary system and kidneys at a fruit. At the end of pregnancy, both at mother, and at the child, the bleeding time can be extended. In this regard ketoprofen is contraindicated in the third trimester of pregnancy.
Data on detection of ketoprofen in milk of mother are absent. Ketoprofen is not recommended to be applied at nursing mothers.
The feature of influence of medicine on ability to run the vehicle or potentially dangerous mechanisms
was not reported About influence on ability of control of cars and mechanisms.

The overdose
At topical administration overdose is improbable. At accidental ingestion of gel, systemic side effects which expressiveness depends on amount of the swallowed drug can develop. Nevertheless, at development of the phenomena of overdose it is necessary to carry out the symptomatic and supporting treatment corresponding to treatment at overdose of anti-inflammatory drugs.

A form of release and packing
On 30, 50 or 100 g of gel in the tubas from soft aluminum covered from within with non-toxic epoxy varnish.
On 100 g of gel in tubas with the doser (the mechanical pump without gas displacer), the representing polypropylene capacity of a cylindrical form with a plunger from polyethylene and a nozzle from polyacetal (on the doser).
Tubas and tubas with the doser close the polypropylene screwing-up caps.
Tubas together with the instruction for medical use in the state and Russian languages put in a cardboard box.

To Store storage conditions at a temperature not above 30 °C!
To store out of children’s reach!

The period of storage
of 5 years
After an expiration date this medicine should not be used.

the Producer A. Menarini Manyufekchering Logistics and Services of Neuter of l., Italy

the Owner of the registration certificate
A. Menarini Industrie Pharmacheutike Riunite of Neuter of l., Italy