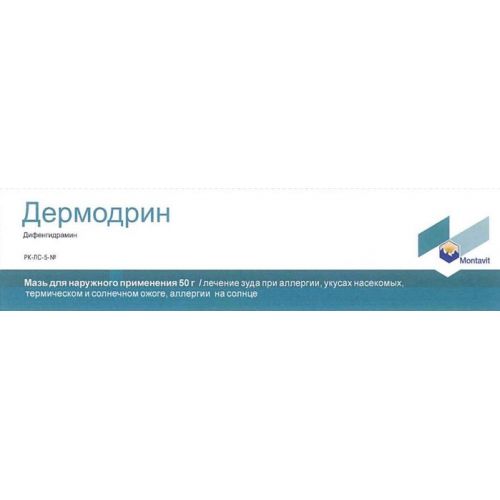 The instruction for medical use of Dermodrin Torgovoye medicine a name Dermodrin Mezhdunarodnoye the unlicensed name Difengidramin Lekarstvennaya a form Ointment for external use, 20 g, 50 g Structure of 100 g of ointment contain active agents: difengidramina hydrochloride of 2.0000 g, excipients: peanut butter, beeswax, cetyl alcohol, hard paraffin, methylparahydroxybenzoate, glycerin, alkylpolyglycol, polysorbate 80, isobornyl acetate, sodium hydroxide, water purified. The description Ointment of white color Pharmacotherapeutic group Drugs for treatment of an itching of skin (including antihistaminic drugs and anesthetics). Antihistaminic drugs for topical administration. Difengidramin the ATX D04AA32 Code the Pharmacological Pharmacokinetics Later properties of drawing on skin therapeutic effective concentration remains directly in the site of application. Quantity of a difengidramin which is soaked up through skin, in direct ratio to the size of field of drawing and the period of contact with Dermodrin ointment skin. Linking with proteins makes 70-85%. Less than 1% of a difengidramin are removed in an invariable view with urine, 50% biotransformirutsya in four inactive metabolites. Elimination half-life of a difengidramin makes 4-8 hours, at elderly – till 13.5 o’clock, metabolites – 8.6-10.4 hours. Dermodrin’s pharmacodynamics contains H1 receptors blocker difengidramin which selectively oppresses histamine H1 receptors. Difengidramin is the effective antihistamine eliminating manifestations of an allergy and an itching, in addition possesses locally anesthetizing and anesthetizing action. Effectively eliminates swelled also irritation after stings of insects and bees, in solar and thermal burns, a photodermatosis. A basis of ointment is the oil-water emulsion which causes the cooling effect of drug. At topical administration, active ingredient of ointment gets into skin and hypodermics. The antipruritic and analgesic effect occurs right after putting ointment and lasts 2–6 h. Indications – allergic dermatitis – stings of insects – dermatitis, urticaria, eczema, pruritic wounds and grazes – thermal and sunblisters of the I degree – a photodermatosis (solar allergy). The route of administration and a dosage Depending on the size of the area of defeat of Dermodrin is recommended to apply on the surface of skin of the size of cherry (to walnut) that corresponds to 1-3 g of drug. Adults and children are more senior than 2 years: apply with a thin layer on affected areas of skin 3-4 times a day and evenly distribute it, slightly rubbing. In case of deterioration in symptomatology or lack of improvement during more, than 7 days of use of drug, or in case of repeated emergence of symptoms in several days after their stopping, it is necessary to stop Dermodrin’s use and to see a doctor. Side effects Seldom – reactions of hypersensitivity, dryness in a mouth, drowsiness, urination disturbance – excitement, concern, fear or spasms (especially at children) is possible – allergic skin reactions in the form of contact dermatitis, photosensitivity with reddening, an itching, blisters, the Contraindication cutaneous dropsy – hypersensitivity to active and auxiliary components of drug – pregnancy and the period of a lactation – it is impossible to apply on open wounds and mucous membranes – the extensive infected or traumatic injuries of skin (measles, chicken pox, blisters, etc.) – children’s age up to 2 years Medicinal interactions At simultaneous use of Dermodrin in the big square: – with tricyclic antidepressants, atropine – can strengthen anticholinergic action of a difengidramin, – with psychotropic, sleeping medicines, opiodny analgetics, antihypertensives, alcohol – mutual strengthening of effects of the used drugs. Special instructions Dermodrin cannot be applied on open wounds or mucous membranes, besides, Dermodrin ointment cannot be applied to the infected or injured skin, in particular, at patients with chicken pox, measles and blisters on skin. It is necessary to avoid contact of drug with mucous membranes of eyes. Because of a possible photosensitization sites the leather processed by Dermodrin ointment should not be affected by sunlight. To children drug is used according to the recommendation of the doctor. At local use the overdose is improbable. Pregnancy and the period of a lactation Dermodrin Ointment is contraindicated in the first trimester of pregnancy as epidemiological data of limited number of the pregnant women accepting difengidramin in the first trimester indicate the increased formation of a wolf mouth. Researches with animals indicate reproductive toxicity. In connection with insufficient data on safety, drug should not be used at pregnancy. Drug is contraindicated in the period of a lactation as it difengidramin is emitted with breast milk. Features of influence on ability to run the vehicle or potentially dangerous mechanisms Considering possible side effects, such as drowsiness, it is necessary to be careful at control of vehicles. Overdose Symptoms: the lowering of arterial pressure, spasms Treatment are possible: symptomatic, as antidote physostigmine of 0.02-0.06 mg/kg of weight in / can be used century. A form of release and packing On 20 g and 50 g of drug in aluminum tubas. On 1 tuba together with the instruction for medical use in the state and Russian languages put in a cardboard pack. To Store storage conditions at a temperature not above 25ºС in original packing for protection against light. To store out of children’s reach! A period of storage 3 years the use Period after the first opening of 12 months. Not to apply after an expiration date. Prescription status Without prescription the Producer Montavit Ges. m b. X , Zaltsbergstrasse 96, A-6067 Abzam, Austria Owner of the registration certificate Montavit Ges. m b. X , Zaltsbergstrasse 96, A-6067 Abzam, Austria the Address of the organization accepting in the territory of the Republic of Kazakhstan claims from consumers on quality of products of Sabipharm LLP, Republic of Kazakhstan, Almaty, Bekturova 104.