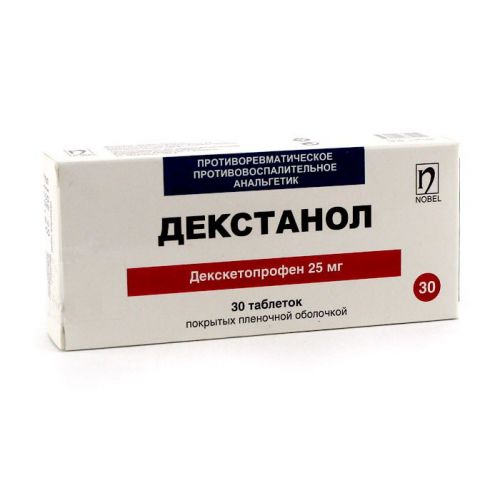 the Trade name
of DEKSTANOL

The description
of the Tablet of round shape, with a biconvex surface, film coated white color, with risky on one party.

Pharmacokinetics Later properties of oral administration of a deksketoprofen trometamol is reached by Cmax at the person on average in 30 minutes. Time of distribution is 0.35 hours and elimination half-life 1.65 hours. Linking with proteins of plasma – 99%. The average volume of distribution is less than 0.25 l/kg. The main part of drug is removed by kidneys in the form of metabolites (after a glyukuronirovaniye).
The pharmacodynamics
of DEKSTANOL possesses anti-inflammatory, analgeziruyushchy and febrifugal action. The mechanism of effect of drug is based on oppression of synthesis of prostaglandins owing to cyclooxygenase suppression. After intake analgeziruyushchy action DEKSTANOLA comes in 30 min. after administration of drug, duration of action is from 4 to 6 h.

Indications
the Pain syndrome of light and average intensity in the following diseases and states:
– acute and chronic inflammatory diseases of the musculoskeletal system (pseudorheumatism, a spondylarthritis, arthrosis, osteochondrosis)
– algodismenoreya
– a toothache

the Route of administration and doses
Depending on a look and intensity of pain, the recommended single dose makes 1/2 tablets DEKSTANOLA (12.5 mg) from 1 to 6 times a day with intervals between receptions of 4-6 hours or on 1 tablet (25 mg) from 1 to 3 times a day every 8 hours.
The maximum daily dose makes 3 tablets of drug (75 mg).
At patients with an abnormal liver function from easy to moderate severity or with slightly reduced function of kidneys, at elderly people the administration of drug should be begun in lower doses – no more than 2 tablets DEKSTANOLA (50 mg) a day.
In acute pains it is necessary to take a pill a minimum in 30 minutes prior to food.
Drug DEKSTANOL is not intended for prolonged use: duration of reception should not exceed 3-5 days.

Side effects
– anemia, including. aplastic and hemolytic, a purpura, an agranulocytosis, a marrow hypoplasia, it is very rare – a neutropenia, thrombocytopenia
– nausea, vomiting, infrequently – dyspepsia, heartburn, an abdominal pain, diarrhea, a constipation, a hematemesis, dryness of a mucous membrane of an oral cavity
– digestive tract erosive cankers, including bleedings and perforation, an anreksiya, increase in activity of pechenochy transaminases (alaninaminotranspherase and aspartate aminotransferase), jaundice, is very rare – an abnormal liver function
– a headache, dizziness, insomnia, drowsiness, is rare – paresthesias
– illegibility of visual perception, sonitus
– decrease or increase in the ABP, feeling of heat, hyperaemia of integuments, premature ventricular contraction, tachycardia, peripheral hypostases, thrombophlebitis of superficial veins
– bradipnoe, is very rare – a bronchospasm
– a polyuria, renal colic, is very rare – nephrite, a nephrotic syndrome
– a dysmenorrhea
– dysfunction of a prostate
– a spasm of muscles, difficulty of movements in joints
– dermatitis, rash, perspiration, urticaria, eels, is very rare – Stephens-Johnson’s syndrome, a Lyell’s disease, a Quincke’s disease, allergic dermatitis, a photosensitization
– hyper – or a hypoglycemia, a gipertriglitseridemiya
– a ketonuria, a proteinuria
– allergic reactions: an acute anaphylaxis,

the Contraindication face edema
– hypersensitivity to a deksketoprofen or other non-steroidal anti-inflammatory drugs
– a peptic ulcer of a stomach and duodenum (including gastrointestinal bleedings and tendency to them)
– active bleedings of various genesis, the increased bleeding
– a concomitant use of anticoagulants
– Crohn’s disease, nonspecific ulcer colitis
– bronchial asthma (including in the anamnesis), recuring polyposes of a nose and near-nasal bosoms, intolerance of acetylsalicylic acid
– heavy heart failure
– a heavy renal failure (clearance of creatinine less than 30 ml/min.)
– active diseases of a liver, a heavy abnormal liver function
– the period after performing aortocoronary shunting
– the confirmed hyperpotassemia
– inflammatory bowel diseases
– children’s and teenage age up to 18 years
– pregnancy and the period of a lactation
Medicinal interactions:
– with other NPVP, including salicylates in high doses (> 3 g/days): increases risk of developing of gastrointestinal bleedings and ulcers, owing to synergism of action,
– with anticoagulants: strengthens effect of anticoagulants (in case of need simultaneous use – careful control of laboratory indicators of blood),
– with corticosteroids: increases risk of developing an ulcer and bleeding in a GIT,
– with lithium drugs: increases concentration of lithium in blood plasma which can reach toxic level therefore lithium level in blood should be controlled during the assigning, change of a dose or cancellation of a deksketoprofen,
– with a methotrexate: increase gematoligichesky toxicity of a methotrexate in connection with decrease in its renal clearance. It is necessary to carry out weekly control of a picture of blood in the first weeks of the combined treatment. In the presence even insignificant renal failures and also at elderly people the careful control is necessary,
– with derivatives of hydantoin and streptocides: the expressiveness of their toxic manifestations can increase,
– with diuretics, APF inhibitors, antagonists of receptors of angiotensin II and blockers of β-adrenoceptors: reduce efficiency of diuretic and other antihypertensive drugs,
– with pentoksifilliny: increase risk of developing bleedings, active clinical monitoring and frequent control of a bleeding time is necessary,
– with a zidovudine: in 1 week after the beginning of combination therapy the manifestation of toxic action of a zidovudine on reticulocytes which can lead ment of heavy anemia is possible. It is necessary to carry out calculation of blood cells and reticulocytes in 1–2 weeks from the beginning of the combined treatment,
– with sulphonylurea drugs: increase in gipoglikemiziruyushchy action in connection with ability to force out them from places of linking with proteins of blood plasma,
– with cyclosporine and takrolimusy: deksketoprofen can increase their nephrotoxicity. When performing combination therapy it is necessary to control function of kidneys,
– with thrombolytic drugs: increase risk of developing bleedings,
– antiagregantny means and selective serotonin reuptake inhibitors: increase risk of developing gastrointestinal bleeding,
– with probenetsidy: concentration of a deksketoprofen in blood plasma can increase that can be caused by the inhibiting influence on canalicular secretion and/or conjugation with glucuronic acid that demands dose adjustment of a deksketoprofen,
– with cardiac glycosides: increase their concentration in blood serum,
– from hinolona: increase risk of developing spasms.

Special instructions
Should be careful when prescribing drug patients of advanced age, patients with allergic reactions, with general diseases of connective tissue and to patients with hemopoiesis disturbance. Administration of drug can mask symptoms of infectious diseases.
In case of side effects and also in the absence of clinical effect within 3-5 days of treatment, it is necessary to report about it to the attending physician.
Features of influence of medicine on ability to run the vehicle or potentially dangerous mechanisms
As DEKSTANOL can cause decline in the ability to concentration of attention, it is necessary to appoint with care drug to the patients who are engaged in potentially dangerous types of activity requiring special attention and speed of psychomotor reactions.

The form of release and packing
On 10 tablets place in blister strip packaging from a film of opaque PVH/PE/PVDH and printing aluminum foil.
On 1, 2 or 3 planimetric packs together with the instruction for medical use in the state and Russian languages place in a pack cardboard with the hologram of firm – producer.

To Store storage conditions at a temperature not over 25 ºС, in the dry, protected from light place.

A period of storage
2 years