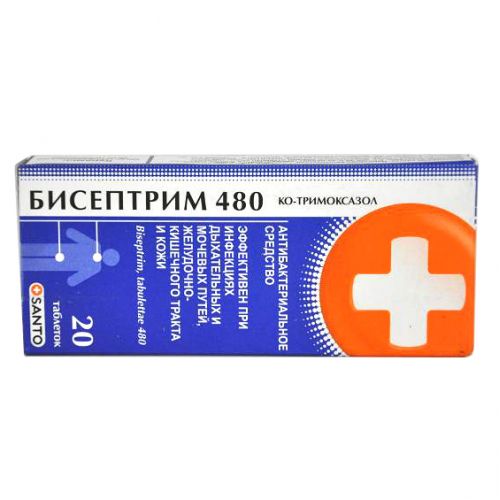 name Co-trimoxazole Dosage Form
of the Tablet of 480 mg

The description
of the Tablet of color, white or white with a yellowish shade, a ploskotsilindrichesky form, with a facet. On one party of a tablet there is a signature logo in the form of a cross.

Pharmacotherapeutic group
Antimicrobial drugs for system use.
Streptocides in a combination with Trimethoprimum (including its derivatives
the Code of automatic telephone exchange J01EE01

the Route of administration and doses
take the Drug inside, in the morning or in the evening, after a meal, with enough liquid.
To children
– from 6 to 12 years – on 1 tablet on (480 mg) 2 times a day
the Single dose for adults and children is more senior than 12 years – on 2 tablets (960 mg)
2 times a day
the Course of treatment proceeds from 5 to 10 days, and in persistent infections longer also depends on the course of the disease.

the Contraindication hyponatremia
– hypersensitivity to drug components
– the profound abnormal liver functions, kidneys
– pregnancy and the period of a lactation
– the megaloblastny anemia (caused by deficiency of folic acid)
– the children’s age up to 6 years

Medicinal interactions
At the elderly patients who are at the same time accepting diuretics (tiazida are more often), increases risk of developing thrombocytopenia. Simultaneous use of a biseptrim and glucose-lowering drugs, indirect anticoagulants, salicylates, phenylbutazone, Naproxenum, Phenytoinum, derivatives of para-aminobenzoic acid is not recommended.

Special instructions
With care should be applied to children of early age. Patients with a renal failure a dose should reduce and control concentration of medicine in blood. During a course of treatment it is necessary to accept enough liquid in an organism. Appoint with care to patients with the possible deficiency of folic acid burdened by the allergic anamnesis, bronchial asthma, abnormal liver functions and a thyroid gland. In these cases the dose of drug needs to be reduced, and to increase intervals between receptions.
Features of influence of medicine on ability to run the vehicle or potentially dangerous mechanisms
Considering side effects of drug, it is necessary to be careful at control of motor transport or potentially dangerous mechanisms.

Overdose
Symptoms – anorexia, nausea, vomiting, weakness, an abdominal pain, a headache, drowsiness, a hamaturia and a crystalluria.
Treatment – gastric lavage, correction of electrolytic disturbances. If necessary – a hemodialysis. Oppression of marrow is characteristic of chronic overdose (pancytopenia).
A form of release and packing
of the Tablet of 480 mg in blister strip packaging on 10 pieces, in a cardboard pack on 2 blisters together with the instruction for use.

Storage conditions
In dry, protected from light, the place, at a temperature from + 20C to + 300C.
To store out of children’s reach!