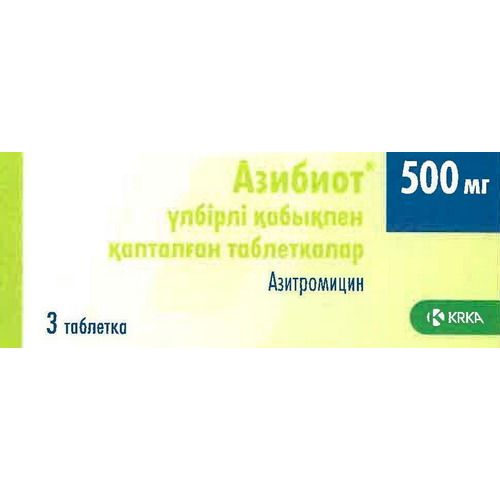 the Description
of the Tablet of an oval form, film coated white color,
with risky on both parties

the Pharmacological
Pharmacokinetics Azithromycin properties is quickly soaked up at oral administration that is caused by its stability in acidic environment and lipophilicity. After single dose 37% of azithromycin are inside soaked up and the peak of concentration in plasma (0.41 µg/мл) is registered in 2-3 hours. Vd makes about 31 l/kg. Azithromycin well gets into airways, bodies and fabrics of an urogenital path, a prostate, into skin and soft tissues, reaching from 1 to 9 µg/мл depending on a type of fabric. High concentration in fabrics (is 50 times higher, than concentration in plasma) and the long half-life period is caused by low linking of azithromycin with proteins of blood plasma and also its ability to get into eukaryotic cells and to concentrate in the environment with a low rn, a surrounding lysosome. The ability of azithromycin to collect in lysosomes is especially important for elimination of intracellular activators. Phagocytes deliver azithromycin to places of localization of an infection where it is released in the course of phagocytosis. But despite high concentration in phagocytes, azithromycin does not affect their function. Therapeutic concentration remains 5-7 days after intake of the last dose. At intake of azithromycin perhaps tranzitorny increase in activity of liver enzymes. Removal of a half of a dose from plasma affects reduction of a half of a dose in fabrics within 2-4 days. After administration of drug in the range from 8 till 24 o’clock the half-life period is 14-20 hours, and after administration of drug in the range from 24 till 72 o’clock – 41 hour that allows to accept Азибиот® 1 time a day. The main way of removal – with bile. About 50% are removed in not changed look, other 50% – in the form of 10 inactive metabolites. About 6% of the accepted dose are removed by kidneys.
The pharmacodynamics
Azithromycin is an antibiotic of a broad spectrum of activity, the first representative of new subgroup of makrolidny antibiotics – azaleads. Possesses bacteriostatic action, but during creation in the center of inflammation of high concentrations causes bactericidal effect. Connecting 50S a ribosome subunit, azithromycin suppresses synthesis of protein in sensitive microorganisms, showing activity concerning the majority of strains of gram-positive, gram-negative, anaerobic, intracellular and other microorganisms.
MIC90 ≤ 0.01 µg/мл

Indications
– pharyngitis/tonsillitis, sinusitis, average otitis
– bronchitis, interstitial and alveolar pneumonia, exacerbation
of chronic bronchitis
– the chronic migrating erythema – an initial stage of a disease of Lyme, an ugly face, impetigo, secondary pyodermatoses
– the diseases of a stomach and a 12-perstny gut associated
by Helicobacter pylori
– a gonorrheal and not gonorrheal urethritis and/or a cervicitis

the Route of administration and doses
to Adults and children with body weight over 45 kg
of Azibiot® of a pill of 500 mg take in 1 hour prior to food or in 2 hours after a meal once a day.
In infections of upper and lower parts of airways, infections of skin and soft tissues appoint on 500 mg/days within 3 days (a course dose – 1.5 g).
In an uncomplicated urethritis and/or a cervicitis appoint once 1 g (2 tablets on 500 mg).
In Lyme’s disease (borellioza) for treatment of an initial stage (erythema migrans) appoint 1 g (2 tablets on 500 mg) in the first day and on 500 mg daily from the 2nd to the 5th day (a course dose – 3 g).
In the diseases of a stomach and duodenum associated with Helicobacter pylori, Azibiot® appoint 1 g (2 tablets on 500 mg) in day within 3 days as a part of combination therapy.
For treatment of an acne vulgar use the following scheme:
On 500 mg daily once a day within 3 days, then on 500 mg once a week for 9 weeks, and the dose of the second week has to be accepted in 7 days after reception of the first tablet. The subsequent 8 doses are accepted at an interval of 7 days. The total dose makes 6 g.
In case of the admission of reception of one dose of drug, it is necessary to accept the passed dose as soon as possible, and the subsequent – with breaks at 24 o’clock.
Older persons and at patients with impaired renal function have no need to change a dosage.

Medicinal interactions
Antacids substantially reduce absorption of Azibiota® therefore the drug should be taken in one hour prior to or in two hours after intake of these drugs.
Makrolidny antibiotics interact with cyclosporine, astemizoly, triazolamy, midazolam or alfentanily. It is recommended to make careful observation at a concomitant use of these drugs.
Azithromycin does not influence R-450 cytochrome and therefore does not interact with theophylline, terfenadiny, carbamazepine, Methylprednisolonum, didanosiny and Cimetidinum.
At simultaneous use of azithromycin and anticoagulants of indirect action the bleeding is possible. Therefore it is necessary to carry out control of a prothrombin time.
At a combination of azithromycin and digoxin the increase in concentration of digoxin in blood is possible therefore it is necessary to control digoxin level in blood and to adjust its dose.
It is odovremenno not recommended to appoint azithromycin and drugs of ergotamine as the ergotism can develop.
Zidovudine: azithromycin increases concentration of an active fosforilirovanny metabolite of a zidovudine in blood. However now the kinichesky importance of this pharmacokinetic interaction is not clear.
Rifabutin: joint use of azithromycin and a rifabutin did not change their plasma concentration. At the same time the neutropenia was observed, however relationship of cause and effect between development of side reaction and use of this combination is not established.

Special instructions
It is reported about the following side effects at reception of antibiotics of group of macroleads: ventricular arrhythmia, including ventricular tachycardia and torsade de pointes (ventricles), at patients with the interval extended with QT.
Extremely seldom against the background of treatment the torsade de pointes (ventricles) and the subsequent myocardial infarction at the persons which had arrhythmia in the anamnesis can be azithromycin.
The extended warm repolarization and an interval of QT which increased risk of developing cardiac arrhythmia and trembling/ventricular fibrillation were observed at treatment by other makrolidny antibiotics. The similar effect of azithromycin cannot be excluded completely at patients with the increased risk of the extended warm repolarization.
Information on excipients.
Азибиот® contains lactose. Patients with rare hereditary diseases of intolerance of a galactose, deficiency of Lappa lactase or malabsorption of glucose – galactoses should not take this medicine.
Pregnancy
Use of drug in the second and third trimesters of pregnancy is possible when the expected advantage exceeds potential risk for a fruit.
The feature of influence of medicine on ability to run the vehicle or potentially dangerous mechanisms
during drug treatment needs to refrain from driving of motor transport and occupations potentially dangerous types of activity.

Overdose
of Data on overdose there is no Azibiotom®. The overdose by makrolidny antibiotics is shown by a reversible hearing loss, heavy nausea, vomiting and diarrhea.
Treatment: it is necessary to cause vomiting and to immediately carry out symptomatic therapy.

the Producer
of KRK, of. The place is new, Slovenia
to Develop