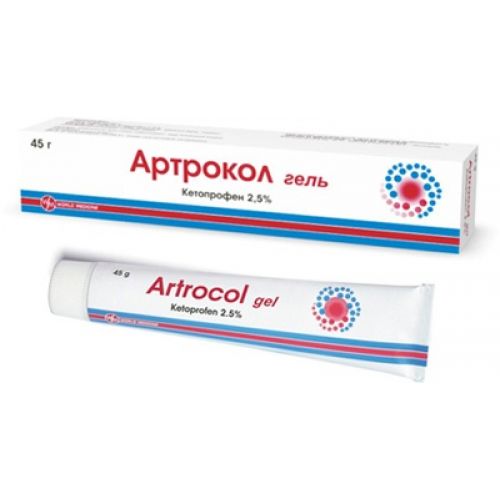 Pharmacological actions
Pharmacokinetics
At topical administration in the form of gel is soaked up extremely slowly and practically does not kumulirutsya in an organism. The bioavailability of ketoprofen in the form of gel is about 5% that causes the local nature of influence it on an organism and lack of system effects.
A pharmacodynamics
Ketoprofen – the non-steroidal anti-inflammatory drug derivative of group of propionic acid. The mechanism of action is connected with inhibition of synthesis of prostaglandins. Renders local analgeziruyushchy, anti-inflammatory, anti-exudative action.

Indications
– a disease of the musculoskeletal device (a joint syndrome at exacerbation of gout, a pseudorheumatism, the psoriasis arthritis ankylosing a spondylarthritis, an osteoarthrosis of various localization, osteochondrosis, inflammatory injury of latent, sinews, a bursitis, a sciatica, a lumbago)
– myalgias of rheumatic and not rheumatic origin
– posttraumatic inflammation of soft tissues and the musculoskeletal device (symptomatic treatment of uncomplicated injuries, including sports, dislocations, stretchings or ruptures of ligaments and sinews, bruises, posttraumatic pains)

the Route of administration and doses
Drug is intended for external use.
A small amount of gel (column 3 – 5 cm long) needs to be caused on the painful and inflamed sites 1 – 2 times a day, it is necessary to rub in skin for several minutes.
Duration of a course of treatment without consultation of the doctor should not exceed 7 days.

Side effects
Often:
– insignificant allergic reactions and erubescences, skin rash,
– a photosensitization
Very seldom:
– nausea, vomiting, a constipation, an abdominal pain
– zheludochno – intestinal bleedings, a round ulcer, diarrhea
– exacerbations of the previous renal failure, interstitial nephrite
– heavy inflammatory reaction of skin (contact dermatitis), bullous dermatitis
– headaches, dizziness, drowsiness
– asthmatic pristip (aspirinovy asthma)
– skin eczema
– a purpura
At emergence of any side effects it is necessary to stop use of drug and to see a doctor.

Contraindications
– individual hypersensitivity to drug components, acetylsalicylic acid or other NPVS (including in the anamnesis)
– children’s age up to 15 years
– pregnancy and the period of a lactation
– existence in the anamnesis of allergic reactions to intake of salicylates or predisposition to allergic diseases and bronchial asthma
– gel should not is applied to the injured skin (eczema, the becoming wet dermatitis, an open or contaminated wound)
– solar or ultra-violet radiation (during treatment or within 2 weeks after its termination)

Medicinal interactions
of the Message about interaction of gel with other medicines did not arrive. Nevertheless, it is recommended careful kotrol for the patients taking the coumarinic drugs as non-steroidal anti-inflammatory drugs can enhance gipoprotrombinemichesky effect and risk of bleeding at combined use with oral anticoagulants.

The special
instructions Gel should not be applied on the sites of skin with pathological changes, such as eczema or acnes or infected sites of skin or open wounds. It is necessary to avoid hit of gel on mucous membranes or in eyes. After putting gel it is necessary to wash up hands at once. Drug is not recommended to be used with occlusive (air-tight) bandages.
In spite of the fact that plasma concentration after use of ketoprofen in the form of gel is much lower, than at oral administration, it is necessary to be careful when prescribing drug the patient with ulcer diseases zheludochno – an intestinal path in the anamnesis, a renal and liver failure and also receiving coumarinic anticoagulants. Appearance of an enanthesis after putting drug is the basis for the termination of its use.
During treatment and for 2 weeks after treatment it is necessary to avoid direct sunshine, including a sunbed.
Pregnancy and the period of a lactation
Drug is contraindicated to use at pregnancy, t. to NPVS can cause lengthening of the gestational period, premature closing of Botallov Canal and pulmonary hypertensia in the newborn and in the period of a lactation.

A form of release and packing
On 45 g in tubas aluminum with internal coating it is delicious.
Each tuba together with the instruction for medical use in the state and Russian languages is placed in a pack from cardboard.

To Store storage conditions at a temperature from 150 With up to 250 C.
To store out of children’s reach!

The owner of a trademark and the certificate of registration is
the UORLD MEDITSIN company, Great Britain
(WORLD MEDICINE, Great Britain).
The address of the organization accepting in the territory of the Republic of Kazakhstan claims from consumers on quality of products (goods) of RK, Almaty, Suyunbaya 222 BTel St. / fax: 8 (7272) 529090