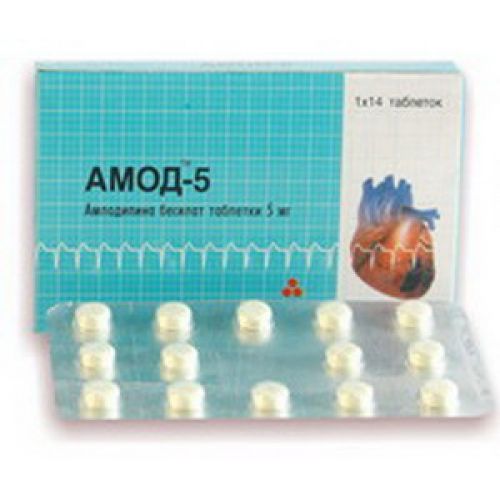 Pharmacokinetics Later properties of intake amlodipin is soaked up quickly and not completely, 60-80% of an oral dose come to a system blood stream. At the first passing, drug is exposed to considerable presistemny elimination. Peak plasma concentration are reached in 6-12 hours after reception.
Drug is widely distributed on all organism and substantially contacts proteins of plasma (92-98%).
The bioavailability of an amlodipin does not change depending on meal.
Amlodipin reaches steady concentration for the 7-9th day from the beginning of constant administration of drug once a day. Plasma levels at the same time are 3.2 times higher, than after reception of a single dose. Amlodipin is metabolized in a liver. About 60% of an amlodipin are removed with urine in the form of metabolites and 5% of not changed substance.
A pharmacodynamics
When assigning therapeutic doses of an amod of negative inotropic effect it was not noted, even at joint appointment with beta-blockers.
The main effects of an amod are a consequence of a vazodilatation. Amod has the minimum effect on electrophysiologic effects of heart and on function of a SA and atriventrikulyarny node. The daily dose of 2.5 mg – 10 mg causes dose-dependent decrease in system arterial blood pressure in patients with hypertensia, duration of action is more than 24 hours.
At treatment of hypertensia of rather single dose of an amod in day, at the same time there is a decrease in both systolic, and diastolic arterial blood pressure.
Influence of an amod on the renin-angiotensin system or on sympathetic nervous system was not noted.
In stenocardia against the background of normal arterial blood pressure the constant oral administration of an amod does not lead to significant changes in heart rate or arterial blood pressure.
The mechanism of hypotensive action Amoda is caused by the direct weakening impact on unstriated muscles of vessels.
Amoda reduces myocardium ischemia the next two ways:
1. expands peripheral arterioles and, thus, reduces the general peripheric resistance (afterload), at the same time heart rate practically does not change that gives a ksnizheniya of consumption of energy and need of a myocardium for oxygen.
2. expands coronary and peripheral arteries and arterioles both in normal, and in ischemic zones of a myocardium that increases intake of oxygen in a myocardium at patients with a vazospasticheskoystenokardiya (Printsmetal’s stenocardia) and prevents development of the coronary spasm caused by smoking.
At patients with arterial hypertension the single daily dose of Amod provides a lowering of arterial pressure (ABP) for 24 hours (as in situation ‘lying’ and ‘standing’). Thanks to the slow beginning of action amlodipin does not cause sharp decrease in the ABP.
At patients with stenocardia the single daily dose of drug increases tolerance to physical activity, delays development of an attack of stenocardia and depression of a segment of ST (on 1 mm) against the background of physical activity, reduces the frequency of attacks of stenocardia and consumption of nitroglycerine.
At the patients with cardiovascular diseases (including coronary atherosclerosis with defeat of one vessel and to a stenosis of the 3rd and more arteries and atherosclerosis of carotids) who had a myocardial infarction, chrezkozhny transluminal angioplasty of coronary arteries (TLP) or having stenocardia, Amod’s use prevents development of a thickening erotic-medii of carotids. Also Amod’s use considerably reduces lethality from the cardiovascular reasons, a myocardial infarction, stroke, TLP, aortocoronary shunting, leads to decrease in number of hospitalization concerning unstable stenocardia and progressing of the chronic heart failure (CHF), reduces the frequency of the interventions directed to restoration of a coronary blood-groove.
In comparison with other derivatives of dihydropyridine amod provides slower approach of action with long relaxation of smooth muscles.

the Route of administration and doses
the Recommended initial dose for treatment of essential arterial hypertension makes 5 mg once a day, the maximum dose – 10 mg once a day.
The recommended dose for treatment of stable stenocardia and vasospastic stenocardia makes 5-10 mg once a day.
Maximum daily dose: 10 mg once a day.
To the patients with low body weight weakened and elderly patients and also in a liver failure the initial dose makes 2.5 mg once a day, in particular, if amod it is appointed in addition to other antihypertensive drugs.
The course of treatment is established by the attending physician.
Side effects
– peripheral hypostases (anklebones and feet), heartbeat, excessive decrease in the ABP, disturbance of a heart rhythm (including bradycardia, ventricular tachycardia and atrial fibrillation), thorax pains
– migraine, development or aggravation of heart failure, orthostatic hypotension, a vasculitis, a myocardial infarction
– arthralgias, myalgias, arthrosis, a myasthenia
– myotonia, a dorsodynia
– feeling of heat and ‘inflows’ to the person, increased fatigue, dizziness, a headache, drowsiness, an indisposition, a syncope, the increased sweating, ‘cold’ sweat, a fever
– hypesthesias, paresthesias, peripheral neuropathy, a tremor, insomnia, lability of mood, unusual dreams, nervousness, a depression, alarm, spasms, apathy, agitation, an ataxy, amnesia
– dryness in a mouth, increase in appetite, a food faddism, thirst, nausea, vomiting, a constipation, a meteorism, dyspepsia, diarrhea, anorexia, a hyperplasia of gums, an abdominal cavity pain
– a hyperbilirubinemia, jaundice (usually cholestatic), increase in activity of ‘hepatic’ transaminases
– gastritis, pancreatitis, hepatitis
– a Werlhof’s disease, nasal bleeding
– a leukopenia, thrombocytopenia
– a hyperglycemia
– short wind, rhinitis, cough
– the speeded-up urination, urodynia, a nocturia, a dysuria, a polyuria
– impotence
– a skin itching, rash, a Quincke’s disease, a multiformny erythema, a small tortoiseshell
– an alopecia, ‘ring’ in ears, a gynecomastia, increase/decrease in body weight
– disorders of vision, a diplopia, accommodation disturbance, a xerophthalmia, conjunctivitis, eye pain
– dermatitis, a parosmiya, a xerodermia, disturbance of xanthopathy

Medicinal interactions
Inhibitors of microsomal oxidation can increase concentration of an amlodipin in plasma, enhancing risk of side effects, and inductors of microsomal enzymes of a liver – to reduce.
Cimetidinum: at simultaneous use of an amlodipin with Cimetidinum the pharmacokinetics of an amlodipin does not change.
Grapefruit juice: the concomitant use of grapefruit or grapefruit juice and an amlodipin is not recommended as the bioavailability can increase that will lead to strengthening of hypotensive effect of an amlodipin.
Unlike other BMKK of clinically significant interaction of the drug Amlodipin (III generation of BMKK) it was not revealed at combined use with non-steroidal anti-inflammatory drugs (NPVP), especially indometacin.
Strengthening of anti-anginal and hypotensive action of BMKK at combined use with thiazide and ‘loopback’ diuretics, verapamil, APF inhibitors, beta blockers and nitrates and also increase in their hypotensive action at combined use with alfa1-adrenoblockers, neuroleptics is possible.
Though when studying the drug Amlodipin of negative inotropic effect usually did not observe, nevertheless, some BMKK can enhance the significant negative inotropic effect of the antiarrhytmic drugs causing lengthening of an interval of QT (for example, Amiodaronum and quinidine).
At combined use of BMKK (for Amod the data are absent) with drugs of lithium possibly strengthening of manifestation of their neurotoxicity (nausea, vomiting, diarrhea, an ataxy, a tremor, sonitus).
Amlodipin does not influence extent of linking with proteins of blood plasma of digoxin, Phenytoinum, warfarin and indometacin.
Aluminum/magnesium the containing antacids: their single dose has no significant effect on pharmacokinetics of an amlodipin.
Sildenafil: single dose of a sildenafil of 100 mg at patients with essential hypertensia does not influence parameters of pharmacokinetics of an amlodipin.
Atorvastatin: repeated use of an amlodipin in a dose of 10 mg and an atorvastatina in a dose of 80 mg is not followed by significant changes in indicators of pharmacokinetics of an atorvastatin.
Digoxin: at simultaneous use of an amlodipin with digoxin the serumal levels and renal clearance of digoxin do not change.
Warfarin: amlodipin does not influence the changes of a prothrombin time caused by warfarin.
Cyclosporine: amlodipin does not cause significant changes in pharmacokinetics of cyclosporine.

Special instructions
At treatment of arterial hypertension Amod can be applied in a combination with thiazide diuretics, alpha and beta blockers, APF inhibitors, nitrates of the prolonged action, sublingual nitroglycerine, NPVP, antibiotics and oral hypoglycemic means.
For treatment of stenocardia Amod it is possible to appoint as means of monotherapy or in a combination with other anti-anginal means, including at the patients refractory to treatment with nitrates and/or beta blockers in adequate doses.
Amod has no adverse impact on a metabolism and lipids of blood plasma and can be applied at treatment of patients with bronchial asthma, diabetes and gout. To patients of low growth and patients with the profound abnormal liver function the smaller dosage can be required by patients with small body weight.
During treatment the control of body weight and observation at the stomatologist is necessary (for prevention of morbidity, bleeding and a hyperplasia of gums).
Pregnancy and the period of a lactation
Safety of use Amod during pregnancy and feeding by a breast is not established therefore use during pregnancy is possible only in case the advantage for mother exceeds risk for a fruit and the newborn.
Features of influence of medicine on ability to run the vehicle or potentially dangerous mechanisms
Owing to possible excessive decrease in the ABP, development of dizziness, drowsiness, etc. in by-effects, it is necessary to show consideration for individual effect of drug in the specified situations, especially in an initiation of treatment and at change of the mode of dosing.

Overdose
At acute overdose the hypotension, bradyarrhythmia, disturbance of conductivity, stagnant heart failure are possible. The excessive peripheral vazodilatation with the profound hypotension can develop, reflex tachycardia is possible.
Treatment
At overdose is necessary observation of warm and respiratory activity. It is necessary to take frequent measurement of arterial blood pressure. At development of hypotension support activity of a cardiovascular system – provide the raised position of extremities and sufficient input of fluids. In the absence of effect of the held events, appoint vasoconstrictive drugs (Phenylephrinum), with control of volume of the circulating blood and a diuresis. Intravenous administration of a gluconate of calcium can eliminate blockade of calcium channels. As the amlodipina besilat substantially contacts proteins of plasma, the hemodialysis is inefficient.

The form of release and packing
On 10 or 14 tablets pack into blister strip packaging from PVC of a film and aluminum foil.
On 1 (for 14 tablets) or 3 (for 10 tablets) planimetric packings together with the instruction for medical use in the state and Russian languages place in a cardboard pack.