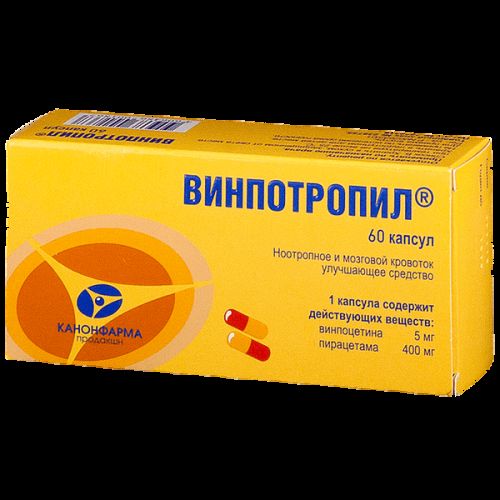 The description
Solid gelatin capsules, No. in size 0, with the body of yellow color and with a lid of red color. Contents of capsules – powder of white or almost white color. Existence of separate crystals and lumps is allowed.

Pharmacokinetics Vinpocetine properties at intake is quickly and completely soaked up in digestive tract (mainly in proximal departments of a small intestine). Bioavailability at reception on an empty stomach – about 7%, after a meal – about 60%. Time of achievement of the maximum concentration in blood plasma – 1 h. When passing through a wall of intestines is not exposed to metabolism. The maximum concentration in fabrics is noted in 2-4 h after intake. Communication with proteins of plasma – 66%. The clearance of 66.7 l/h exceeds the plasma volume of a liver (50 l/h) that demonstrates extrahepatic metabolism. At repeated receptions the kinetics has linear character. Elimination half-life – 4.83±1.29 h. It is removed by kidneys and through intestines in the ratio 3:2. With urine several percent of a Vinpocetine in not changed look, the rest are removed – in the form of metabolites.
Piracetam after intake is well soaked up and gets into various bodies and fabrics. The bioavailability is about 95%. The maximum concentration in blood is reached in 0.5-1.0 h after intake. Gets through a blood-brain barrier (GEB), collects in brain fabric in 1-4 h after intake. Out of medullispinal liquid it is brought much more slowly, than out of other fabrics. Practically is not exposed to biotransformation and on 2/3 it is allocated with kidneys in not changed look during 30 h. Plasma elimination half-life – 4-5 h, from a brain of-7.7 h.
A pharmacodynamics
Vinpotropil – the combined drug. Has the properties characteristic for tserebrovazodilatiruyushchy (Vinpocetine) and nootropic (piracetam) of means.
The Vinpocetine improves metabolism of a brain, increasing consumption of glucose and oxygen brain tissue. Increases resistance of neurons to a hypoxia, strengthens glucose transport to a brain through GEB, transfers process of disintegration of glucose to energetically more economical, aerobic way, selectively blocks Sa2+-zavisimuyu phosphodiesterase, increases levels of adenosinemonophosphate (AMF), the cyclic guanozinmonofosfat (tsGMF) and adenosine triphosphate (ATP) of a brain. Strengthens exchange of noradrenaline and serotonin of a brain, stimulates the ascending branch of a noradrenergichesky system, has antioxidant effect. Reduces aggregation of thrombocytes and the increased viscosity of blood, increases elasticity of erythrocytes and blocks utilization by adenosine erythrocytes, promotes increase in return by oxygen erythrocytes. Increases a cerebral blood stream, reduces resistance of vessels of a brain without significant change of indicators of system blood circulation. Does not render effect of burglarizing and strengthens blood supply, first of all in ischemic sites of a brain. Gets through a placental barrier.
Piracetam has positive impact on exchange processes of a brain, slightly increases concentration of ATP in a brain, strengthens synthesis of ribonucleic acid and phospholipids, stimulates glycoclastic processes, strengthens glucose utilization. Improves integrative activity of a brain, promotes memory consolidation, facilitates training process, changes the speed of spread of activation in a brain, improves microcirculation, without having at the same time vasodilating effect, inhibits aggregation of the activated thrombocytes. Has protective action at the injuries of a brain caused by a hypoxia, intoxication, an electroshock strengthens alpha and the beta activity, reduces delta activity on the electroencephalogram, reduces expressiveness of a vestibular nystagmus, improves bonds between cerebral hemispheres and synaptic conduction in neocortical structures, increases intellectual activity, strengthens a brain blood stream. Has no sedative, psychogogic influence. The effect develops gradually.
Has effect concerning symptoms of initial manifestations of cognitive disturbances of tserebro-vascular genesis at patients of advanced and senile age. Recommended in psychogeriatric practice.

Indications
In the medical purposes:
– disturbance of cerebral circulation (the recovery period of an ischemic and hemorrhagic stroke, encephalopathy of various genesis, including in alcoholism)
– atherosclerosis of vessels of a brain
– intoxications, brain injuries and other diseases of the central nervous system which are followed by disturbance of intellectual-mnestic functions
– a psychoorganic syndrome
– labyrinthopathies of various genesis
– Menyer’s syndrome

the Route of administration and doses
For patients of 18 years is also more senior: inside, before food, on 1-2 capsules 2-3 times a day. The last reception – in 4 hours prior to a dream. The recommended maintenance dose – 1 capsule 3 times a day. Duration of maintenance therapy is defined by the attending physician. The general duration of a course of treatment is from 2-3 weeks to 2-6 months. Before cancellation the dose of drug should be reduced gradually.

Side effects
– change of the electrocardiogram (ECG) (ST segment depression, lengthening of an interval of QT), tachycardia, premature ventricular contraction, lability of arterial blood pressure, feeling of inflows
– sleep disorders, a headache, dizziness, hyperphrenia, motive disinhibition, irritability, imbalance, decline in the ability to concentration of attention, uneasiness, a depression, an ataxy, extrapyramidal disorders (including a hyperkinesia), spasms, a tremor
– a gastralgia, nausea, vomiting, dryness in a mouth, heartburn, a constipation, diarrhea
– allergic reactions, increase in sexual activity, deterioration in a course of stenocardia, increase in body weight, an asthenia, the general weakness, the increased sweating

of the Contraindication
– hypersensitivity to drug components
– pregnancy and the period of a lactation
– deficiency of lactase, a lactose intolerance, glyukozo-galaktozny malabsorption
– the significant disturbances of a heart rhythm
– coronary heart disease (heavy course)
– the acute stage of a hemorrhagic stroke
– a renal and/or liver failure
– the children’s and teenage age up to 18 years

Increases Medicinal interactions: risk of a hemorrhagic complication against the background of a geparinoterapiya, effects of hormones of a thyroid gland, antipsychotic means (neuroleptics), indirect anticoagulants, psychostimulants.
Weakens: effect of anticonvulsant drugs (reduces a convulsive threshold).
Despite the absence of the data confirming a possibility of interaction it is recommended to show care at co-administration with drugs of the central action, antiarrhythmic action.

The special
instructions Existence of a Syndrome of the Prolonged Interval of QT and Administration of Drugs, QT causing lengthenings of an interval, demands periodic control of the ECG. In case of a lactose intolerance it is necessary to consider that one capsule contains about 110 mg of lactose.
Features of influence of medicine on ability to run the vehicle or potentially dangerous mechanisms
Considering possible side effects, it is necessary to be careful at control of motor transport and occupation other potentially dangerous types of activity demanding the increased concentration of attention and speed of psychomotor reactions.

4 years
not to use a period of storage after an expiration date.

the Name and the country of the owner of the registration certificate
of CJSC Kanonfarm production, the Russian Federation