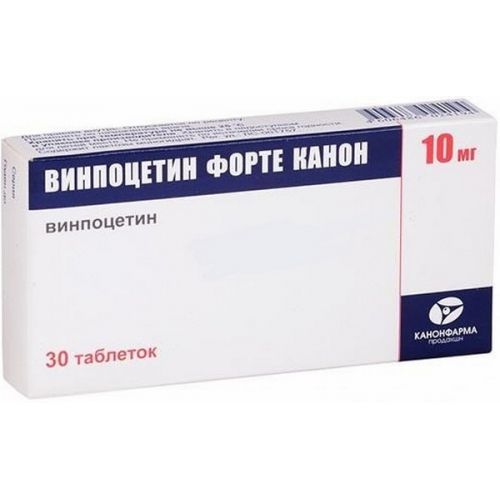 the Vinpocetine forte the Canon

the Trade name
the Vinpocetine forte the Canon

name Vinpocetine Dosage Form
of the Tablet of 10 mg

The description
of the Tablet of color, white or white with a yellowish shade, ploskotsilindrichesky with a facet.

Pharmacokinetics At properties intake is quickly and completely soaked up in digestive tract (mainly in proximal departments of a small intestine). Bioavailability at reception on an empty stomach – about 7%, after a meal – about 60%. The maximum concentration in blood plasma is reached in 1 hour, in fabrics – in 2-4 hours. When passing through a wall of intestines is not exposed to metabolism. At introduction of repeated doses the kinetics has linear character.
Communication with proteins of blood plasma – 66%. Easily gets through gistogematichesky barriers (including through a blood-brain barrier). Gets into breast milk (0.25% within 1 hour), through a placental barrier. The clearance – 66.7 l/h exceeds the plasma volume of a liver (50 l/h) that demonstrates extrahepatic metabolism. Metabolism happens in a liver. The main metabolite is apovinkaminovy acid which has some pharmacological activity. Other inactive metabolites – hydroxy Vinpocetine, hydroxy-apovinkaminovaya acid, a hydroxy-Vinpocetine-glitsinat.
Elimination half-life of T1/2 – 3.54 – 6.12 hours.
It is removed by kidneys and intestines in the ratio 3:2. With urine several percent of a Vinpocetine in not changed look, the rest are removed – in the form of metabolites.
The pharmacodynamics
Improves metabolism of a brain, increasing consumption of glucose and oxygen brain tissue. Increases resistance of neurons to a hypoxia, strengthens glucose transport to a brain through a blood-brain barrier, transfers process of disintegration of glucose to energetically more economical, aerobic way, selectively blocks Sa2+-zavisimuyu phosphodiesterase, increases levels of adenosinemonophosphate (AMF), the cyclic guanozinmonofosfat (tsGMF) and adenosine triphosphate (ATP) of a brain. Strengthens exchange of noradrenaline and serotonin of a brain, has antioxidant effect. Reduces aggregation of thrombocytes and the increased viscosity of blood, increases elasticity of erythrocytes and blocks utilization by adenosine erythrocytes, promotes increase in return by oxygen erythrocytes. Increases a cerebral blood stream, reduces resistance of vessels of a brain without significant change of indicators of system blood circulation. Does not render effect of burglarizing and strengthens blood supply, first of all in ischemic sites of a brain.

Indications
as a part of complex therapy (neurology):
as symptomatic means at various forms of insufficiency of cerebral circulation (ischemic stroke, a recovery stage of a hemorrhagic stroke, a consequence of the had stroke, the tranzitorny ischemic attack, vascular dementia, vertebrobazilyarny insufficiency, atherosclerosis of vessels of a brain, chronic insufficiency of cerebral circulation of hypertensive and posttraumatic genesis).
Ophthalmology: chronic vascular diseases of a choroid and/or retina of an eye (including occlusion of the central artery or vein of a retina).
Decrease in auditory acuity of perceptual type, Menyer’s disease, idiopathic sonitus.
A route of administration and doses
Inside, after meal. A standard daily dose – on 10 mg 2-3 times a day. The maximum daily dose – 30 mg.
A course of treatment – 1-3 months.
Repeated courses 2-3 times a year are possible. Before drug withdrawal it is necessary to reduce a dose gradually.
In diseases of kidneys and/or a liver of a dose decline it is not required.

Side effects
Seldom ≥1/10000, & lt, 1/1000
– a depression of a segment of ST and lengthening of an interval QT, tachycardia, premature ventricular contraction (communication of these disorders using drug is doubtful because of their spontaneous emergence), an ischemia / myocardial infarction, an angina of exertion
Very seldom & lt, 1/10000
– fibrillation of auricles, arrhythmias
– anemia, agglutination of erythrocytes, shortening of a prothrombin time
– euphoria, a tremor, spasms, a depression
– a hypothermia
– discomfort in a thorax
– conjunctiva hyperaemia
– a dysphagy, stomatitis
– dermatitis
– increase in body weight
is not frequent ≥1/1000, & lt, 1/100
– insignificant fluctuations of the ABP (mainly towards decrease), phlebitis
– a sleep disorder (insomnia, drowsiness), dizziness, a headache, weakness, excitement, a hemiparesis
– dryness in a mouth, nausea, heartburn, a constipation, diarrhea, an abdominal pain, a loss of appetite
– the increased perspiration, hyperaemia of integuments, an asthenia
– allergic reactions (skin rash, a small tortoiseshell)
– a leukopenia, thrombocytopenia, decrease/increase in quantity of eosinophils
– diabetes
– a hyperacusia, a gipoakuziya, sonitus
–

Contraindication thrombophlebitis
– hypersensitivity to drug components
– the significant disturbances of a heart rhythm
– coronary heart disease with symptoms of heart failure
– the acute stage of a hemorrhagic stroke
– deficiency of lactase, a lactose intolerance, glyukozo-galaktozny malabsorption
– pregnancy and the period of a lactation
– children’s and teenage age up to 18 years

Medicinal interactions
At simultaneous use of a Vinpocetine with glibenclamide, digoxin, atsenokumaroly, Hydrochlorthiazidum, Imipraminum, with the drugs containing Pindololum, chloranolol Clopamidum of interactions is not observed.
Strengthening of hypotensive action at simultaneous use with metildopy is possible (control of arterial blood pressure is necessary).
Increases risk of hemorrhagic complications against the background of a geparinoterapiya.
Despite the absence of the data confirming interaction existence it is recommended to show care at simultaneous use with drugs of the central, antiarrhythmic and anticoagulating action.

Special instructions
in case of initial lengthening of an interval of QT and also at simultaneous use with the medicines extending QT interval during treatment by a Vinpocetine periodic electrocardiographic control is necessary.
Features of influence of medicine on ability to run the vehicle or potentially dangerous mechanisms
Considering side effects of drug, it is necessary to be careful at control of motor transport or potentially dangerous mechanisms.

the Owner of the registration certificate
of CJSC Kanonpharm production, the Russian Federation
the Address of the organization of the accepting claim from the consumer on quality of drug in the territory of the Republic of Kazakhstan: SP Nesterenko N. A., Republic of Kazakhstan, 050000, Almaty, Furmanova, 128, office 16, bodies.: +7 727 2796659, e-mail: ip_n_nesterenko@list.ru