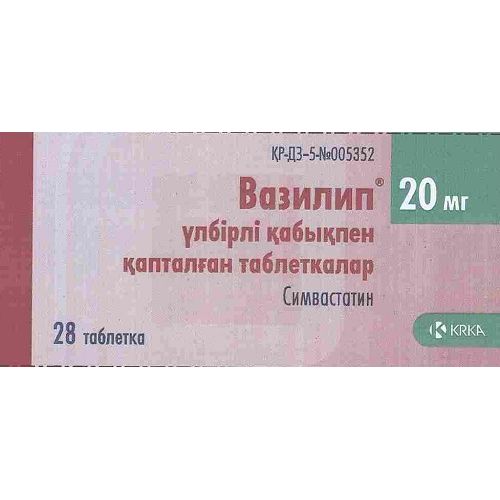 the Trade name
of Vazilip®

Pharmacokinetics Simvastatin properties is provided in an inactive lactone form which is rather well absorbed from digestive tract from 61% to 85%. After oral administration the maximum therapeutic concentration in blood plasma is reached through – 1.3 – 2.4 h and decreases by 90% in 12 h. Communication with proteins of blood plasma – 98%.
It is metabolized in a liver, has effect of the first passing through a liver (it is generally hydrolyzed in the active form beta hydroxyacid). Elimination half-life of active metabolites makes 1.9 h.
It is generally removed through zheludochno – an intestinal path (60%) in the form of metabolites. About 10 – 15% are removed by kidneys in an inactive form.
The pharmacodynamics
Active agent of the drug Vazilip® is simvastatin which main effect is decrease in content of the general cholesterol and cholesterol of lipoproteins of the low density (LDL) in blood plasma. Вазилип® 3-hydroxy – 3-methyl glutaryl of coenzyme A (GMG-KoA) of reductase, the enzyme catalyzing transformation GMG-KoA into mevalonovy acid (early stage of synthesis of cholesterol) is inhibitor. Вазилип® reduces concentration of the general cholesterol, cholesterol of lipoproteins of the low density (LDL) and triglycerides. Content of cholesterol of lipoproteins of very low density (LPONP) also decreases while the content of cholesterol of lipoproteins of the high density (LPVP) moderately increases. Reduces the content of the general cholesterol and LDL in cases of heterozygous family and single forms of a hypercholesterolemia, at the mixed lipidemia when the increased content of cholesterol is risk factor. Drug reduces the level of the general cholesterol and cholesterol of lipoproteins of the low density (LDL) at patients with coronary heart disease, reducing risk of a myocardial infarction and a lethal outcome for these patients.
The anti-sclerous effect of Vazilipa® is a consequence of impact of drug on walls of vessels and components of blood. Вазилип® changes metabolism of macrophages, oppressing them activation and destruction of atherosclerotic plaques. Вазилип® suppresses synthesis of the isoprenoids which are growth factors at proliferation of smooth muscle cells of an internal cover of vessels. Under the influence of a simvastatin the endothelium – dependent expansion of blood vessels improves.
The therapeutic effect occurs in 2 weeks, the maximum effect is observed in 4 – 6 weeks of treatment.

Indications
– primary hypercholesterolemia of the IIa and IIb types, including a polygenic hypercholesterolemia, a heterozygous hereditary hypercholesterolemia and the mixed lipidemia (drug is used in the form of monotherapy when observance of a diet and other methods of treatment was insufficient).
– prevention of cardiovascular disturbances, at patients with coronary heart disease (stroke or tranzitorny ischemic attacks), delay of progressing of atherosclerosis of coronary vessels, reduction of risk of procedures of revascularization (shunting of coronary arteries and transdermal transluminal angioplasty).

The route of administration and doses
take the Drug inside, once, in the evening.
The recommended dose of Vazilip® for treatment of a hypercholesterolemia varies from 10 mg to 80 mg once a day in the evening.
The hypercholesterolemia
the Recommended initial dose of drug for patients with a hypercholesterolemia, makes 10 mg. The maximum daily dose – 80 mg. It is necessary to carry out changes (selection) of a dose with intervals not less, than in 4 weeks. At most of patients the optimum effect is reached at administration of drug in doses to 20 mg a day.
The homozygous hereditary hypercholesterolemia
At patients with a homozygous hereditary hypercholesterolemia the recommended daily dose of the drug Vazilip® makes 40 mg in the evening or 80 mg in three steps (20 mg – in the morning, 20 mg – in the afternoon and 40 mg – in the evening).
Prevention of cardiovascular disturbances
At treatment of patients with coronary heart disease the effective doses of the drug Vazilip® make 20 – 40 mg once, in the evening. Therefore the recommended initial dose at such patients – 20 mg a day. Changes (selection) of a dose should be carried out with intervals of 4 weeks, if necessary it is possible to increase a dose to 40 mg a day. If LDL content less than 75 mg/dl (1.94 mmol/l), content of the general cholesterol – less than 140 mg/dl (3.6 mmol/l), a dose of drug it is necessary to reduce.
And at patients with a small or moderate renal failure of changes of a dosage of drug it is not required from patients of advanced age. At patients with the profound renal failure (clearance of creatinine less than 30 ml/min.) or receiving treatment by cyclosporine, gemfibrozily, other fibrata or a hypolipidemic dose of Niacinum (more than 1 g/days), the recommended initial dose of the drug Vazilip® makes 5 mg, the maximum daily dose makes 10 mg. Further increase in a dose in such situations is not recommended. In need of increase in a dose the careful observation of such patients is necessary.

Side effects
Seldom (≥ 1/10.000, & lt, 1/1000)
– anemia
– a headache, paresthesia, dizziness, a peripheral neuropathy
– a constipation, an abdominal pain, a meteorism, dyspepsia, diarrhea, nausea, vomiting,
pancreatitis
– hepatitis, jaundice
– rash, an itching, baldness
– a myopathy, a rhabdomyolysis, myalgia, muscular spasms
– an asthenia
– allergic reactions: a Quincke’s edema, urticaria, a photosensitization
– a volchanopodobny syndrome, rheumatic polymyalgia, a dermatomyositis, a vasculitis
– arthritis, an arthralgia, fever, inflows of blood to face skin, an asthma and the significant weakness
– thrombocytopenia, an eosinophilia, increase in the blood sedimentation rate (BSR), increase in hepatic transaminases (ALT, nuclear heating plant and GGT) in serum,
increase in alkaline phosphatase and increase in the KFK level in serum
is Very rare (& lt, 1/10.000):
– the memory impairment
– sleep disorders, including insomnia and nightmares
– sexual dysfunction
– a depression
– exceptional cases of an interstitial disease of lungs, especially
at long-term therapy

of the Contraindication
– hypersensitivity to any of drug components,
hypersensitivity to other drugs of a statinovy row
(GMG-KoA-reduktazy inhibitors) in the anamnesis
– liver diseases in an active stage, increase in activity of hepatic
transaminases in blood serum of not clear genesis
– pregnancy and the period of a lactation
– a porphyria
– children’s age up to 18 years

Medicinal interactions
Simultaneous use of a simvastatin with Niacinum, cyclosporine, erythromycin, klaritromitsiny, ritonaviry or nefazadony can lead to increase in concentration of a simvastatin in blood serum in this connection development of a myopathy with a rhabdomyolysis and a renal failure is possible. The specified medicines are inhibitors of P450 3A4 cytochrome participating in metabolic transformation of a simvastatin in a liver. The similar situation can arise at a concomitant use of the drug Vazilip® with derivatives of fibroyevy acid.
At a concomitant use with warfarin strengthening of action of the last on blood clotting indicators in this connection risk of developing bleedings increases is possible, with digoxin (single dose) – moderate increase in concentration of digoxin in blood plasma is noted. Therefore careful observation of the patients receiving Vazilip® and digoxin at the same time is necessary.
Colestyraminum and kolestipol reduce bioavailability of a simvastatin (use of a simvastatin is possible in 4 h after intake of the specified drugs, at the same time the additive effect is noted).

Overdose
Symptoms: strengthening of side effects.
Treatment – in case of overdose of drug it is necessary to hold the general events: monitoring and maintenance of vital signs, prevention of further absorption of medicine (gastric lavage, intake of activated carbon or depletive).
At development of a myopathy with a rhabdomyolysis and an acute renal failure (rare, but heavy side effect) it is necessary to stop immediately administration of drug and to enter to the patient diuretic and sodium bicarbonate (intravenous infusion). If necessary the hemodialysis is shown. The rhabdomyolysis can cause a hyperpotassemia which can be eliminated with intravenous administration of Calcii chloridum or calcium of a gluconate, infusion of glucose with insulin, use of potassium ion exchangers or, in hard cases, by means of a hemodialysis.

To Store storage conditions in original packing at a temperature not over 30 ºС.
To store out of children’s reach!

the Producer
of KRK, of, the place Is new, Shmaryeshka of tsest 6, 8501 the place, Slovenia

the Name and the country of the owner of the registration certificate
of KRK, of Is new, the Place, Slovenia