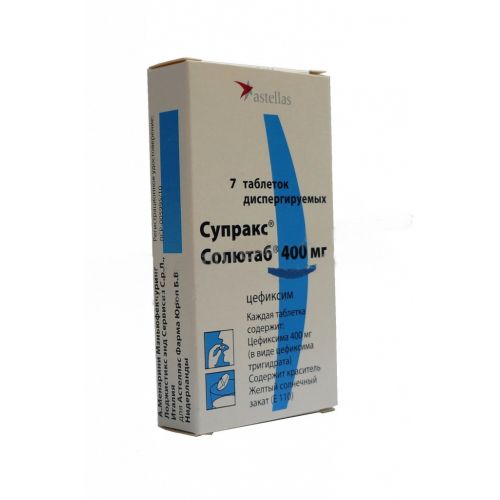 the Description
of the Tablet of oblong shape of pale orange color, with risky and a smell of strawberry

Pharmacokinetics Absorption At properties intake bioavailability makes 30-50% and does not depend on meal. The maximum concentration at adults after oral administration in a dose of 400 mg is reached in 3-4 h and makes 2.5-4.9 mkg/ml, after reception in a dose of 200 mg – 1.49-3.25 mkg/ml.
Does not accord meal on absorption of drug from digestive tract of significant effect.
Distribution
After single intravenous administration of 200 mg of a tsefiksim the volume of distribution was 6.7 l, at achievement of equilibrium concentration – 16.8 h.p. proteins of plasma about 65% of drug communicate. Creates the highest concentrations in urine and bile. Tsefiksim gets through a placenta. Concentration of a tsefiksim in blood of an umbilical cord reaches 1/2-1/6 concentration of a tsefiksim in blood plasma of mother, in breast milk drug is not defined. After administration of drug in a dose of 8 mg/kg the concentration of a tsefiksim in cerebrospinal fluid makes 0.06-0.56 mkg/ml.
Metabolism and removal
Elimination half-life is 3-4 hours. Drug is not metabolized in a liver, 50-55% of the accepted dose are removed with urine in not changed look during 24 h. About 10% of a tsefiksim are removed with bile.
Pharmacokinetics in special clinical situations
in the presence at the patient of a renal failure it is possible to expect increase in elimination half-life, respectively, higher concentration of drug in serum and delays of its elimination with urine. At patients with clearance of creatinine of 30 ml/min. at reception of 400 mg of a tsefiksim the elimination half-life increases to 7 – 8 h, the maximum concentration in serum averages 7.53 mkg/ml, and removal with urine in 24 hours – 5.5%. At patients with cirrhosis the period of removal will increase up to 6.4 h, time of achievement of the maximum concentration – 5.2 hours, at the same time increase a drug share, eliminiruyushchegosya kidneys on average to 43%. The maximum concentration in serum and the area under a pharmacokinetic curve do not change.
The pharmacodynamics
the Mechanism of action
Has bactericidal effect. The mechanism of action is connected with disturbance of synthesis of a cell wall of bacteria. Tsefiksim is resistant to action β-лактамаз, produced by many gram-positive and gram-negative bacteria.
Activity range
Gram-positive bacteria: Streptococcus pneumoniae, Streptococcus pyogenes, Streptococcus agalactiae. Gram-negative bacteria: Neisseria gonorrhoeae, Moraxella catarrhalis, Haemophilus influenzae, Haemophilus parainfluenzae, Escherichia coli, Proteus mirabilis, Proteus vulgaris, Klebsiella pneumoniae, Klebsiella oxytoca, Pasteurella multocida, Providencia spp., Salmonella spp., Shigella spp., Citrobacter amalonaticus, Citrobacter diversus.
Pseudomonas spp., Enterococcus spp., Listeria monocytogenes, the majority of stafilokokk (including metitsillinorezistentny strains) are resistant, Bacteroides fragilis to drug and Clostridium spp. Activity concerning Enterobacter spp. and Serratia marcescens is variable.

the Route of administration and doses
For adults the daily dose makes 400 mg in one or two receptions.
The tablet can be swallowed entirely, washing down with enough water, or to dissolve in water and to drink the received suspension right after preparation. The drug can be taken irrespective of meal.
Duration of treatment depends on the nature of a course of the disease and a type of an infection. After disappearance of symptoms of an infection and/or fever it is reasonable to continue administration of drug within, at least, 48-72 hours.
The course of treatment in respiratory infections and ENT organs makes 7-14 days.
At the tonzillofaringit caused by Streptococcus pyogenes, duration of treatment has to be not less than 10 days.
In uncomplicated gonorrhea drug appoint in a dose 400 mg once.
In uncomplicated infections of the lower uric ways at women drug can be appointed within 3-7 days.
At the complicated infections of the lower uric ways, infections of upper uric ways and any urinary tract infections at men duration of treatment is 7-14 days.
At patients with the profound renal failure the dose should be reduced. At patients with a renal failure at level is clearance & lt, 20 ml/min. / 1.73 sq.m the recommended dose makes 200 mg/day at single dose.

Side effects
not often (& gt, 0.1-1%)
– headaches, dizziness, a dysphoria
– an abdominal pain, digestion disturbances, nausea, vomiting and diarrhea
Seldom (0.01-0.1%)
– allergic reactions (for example, urticaria, a skin itching)
– increase in level of alkaline phosphatase and transaminases
Very seldom (≤ 0.01%)
– a tranzitorny leukopenia, an agranulocytosis, a pancytopenia, thrombocytopenia or an eosinophilia. Separate cases of disturbances of fibrillation
– a Lyell’s disease (in this case drug should be cancelled immediately), other allergic reactions connected with a sensitization – medicinal fever, a syvorotochnopodobny syndrome, hemolytic anemia and interstitial nephrite were noted. At development of an acute anaphylaxis, adrenaline is entered, system glucocorticoids and antihistaminic drugs
Separate cases
– pseudomembranous colitis
– separate cases of hepatitis and cholestatic jaundice
– small increase in level of creatinine in blood are appointed, the hamaturia
– hemolytic anemia
– interstitial nephrite
– tranzitorny hyperactivity, increases the probability of developing of spasms

Medicinal interactions
At combined use of a tsefiksim strong diuretics with such as Acidum etacrynicum and furosemide amplifies ototoxicity and there is an increased risk of developing a renal failure.
Blockers of canalicular secretion slow down removal of a tsefiksim through kidneys that can lead to overdose symptoms.
In case of drug Supraks® use Solyutab along with nephrotoxic substances (aminoglycosides, polymyxin B, colistin, or diuretics (furosemide, Acidum etacrynicum) in high doses it is necessary to control function of kidneys especially carefully. After long-term treatment by the drug Supraks® Solyutab it is necessary to check a condition of function of a hematopoiesis.
Tsefiksim reduces the prothrombin ratio, strengthens effect of indirect anticoagulants.

Special instructions
Patients with a renal failure should appoint drug with care, at clearance of creatinine & lt, 20 ml/min. are necessary reduction of a dose of drug (see the section Route of Administration and Doses).
Due to the possibility of cross allergic reactions with penicillin, it is recommended to estimate the anamnesis of patients carefully. At emergence of allergic reaction the use of drug has to be immediately stopped.
At long administration of drug the disturbance of normal intestinal microflora is possible that can lead to excess reproduction of Clostridium difficile and development of pseudomembranous colitis. At emergence of easy forms the antibiotic – the associated diarrhea, as a rule, is enough to stop administration of drug. At severe forms the corrective treatment is recommended (for example, prescribing of Vancomycinum inside on 250 mg 4 times a day).
The dispersed tablets should be dissolved only in water. During treatment the false positive forward reaction of Koombs and false positive reaction of urine to glucose when using some test systems for express diagnostics is possible.
Pregnancy and the period of a lactation
Use of drug at pregnancy is possible only when the expected advantage for mother exceeds potential risk for a fruit. In need of drug Supraks® use Solyutab in the period of a lactation the breastfeeding should be stopped temporarily.
Influence of drug on ability to run motor transport and other potentially dangerous mechanisms
of the Research of influence Supraks® Solyutab on ability to run motor transport and to work with mechanisms was not carried out.

Period of storage
3 years.
Not to apply after expiry date.

Name and country of the organization packer
of A. Menarini Manyufekchering Logistics and Services of Neuter. L.,
Italy Via di Scandicci 37, 50131 Florence, Italy

to Develop e-mail of astellas@com.kz