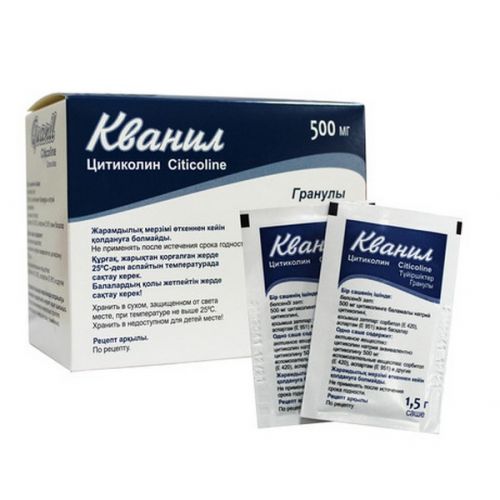 The instruction for medical use of QUANIL medicine the Trade name QUANIL the International unlicensed name Tsitikolin Lekarstvennaya a form of the Granule, 500 mg Structure of One sachet contains active agent: a tsitikolina of sodium it is equivalent a tsitikolina of 500 mg, excipients: sorbitol, povidone, anhydrous citric acid, aspartame, fragrance lemon, polyethyleneglycol 6000, sodium stearit fumarating, a lauryl sodium sulfate, isopropyl alcohol the Description of the Granule from white till almost white color with taste of a lemon. Pharmacotherapeutic group of Psikhoanaleptiki. Psychostimulants and nootropa. Psychostimulants and nootropa others. Tsitikolin. The ATX N06BX06 code the Pharmacological Pharmacokinetics At properties intake absorption of a tsitikolin from digestive tract almost full. Tsitikolin is water-soluble substance about more than 90% of bioavailability at oral introduction. The pharmaceutical product is metabolized in intestines and in a liver with formation of sincaline and cytidine. Tsitikolin quickly reaches tissues of a brain and is actively built in cell membranes, cytoplasm and mitochondrions, activating activity of phospholipids. Drug removal very slow. Only a small amount of a dose (less than 3%) is removed with urine (in the form of metabolites and not changed look) and excrements. About 12% of a dose are removed through airways. A pharmacodynamics Quanil – nootropic drug. Tsitikolin, being a predecessor of key ultrastructural components of a cellular membrane (mainly phospholipids), has a broad spectrum of activity: promotes restoration of the damaged cell membranes, inhibits action of a phospholipase, interfering with education of free radicals, also prevents death of cells, affecting apoptosis mechanisms. Quanil is a sincaline source, increasing synthesis of acetylcholine, and stimulates biosynthesis of structural (basic) phospholipids in a membrane of neurons. Improves transfer of nervous impulses in cholinergic neurons, positively affects plasticity of neuronalny membranes and function of receptors. Improves a cerebral blood stream, strengthens metabolic processes in a brain, activates structures of a reticular formation of a brain. In an acute period of a stroke reduces the volume of the damaged fabric, improves cholinergic transfer. Quanil softens symptoms which are observed in a hypoxia and ischemia of a brain, including a memory impairment, emotional lability, a bezinitsiativnost, difficulties during the performing of daily actions and self-service. In a craniocereberal injury reduces duration of a posttraumatic coma and expressiveness of neurologic symptoms. Quanil has antiedematous properties and reduces wet brain thanks to the stabilizing action by a neuronalny membrane. Indications – a stroke and its consequences – a craniocereberal injury and its consequences – the cognitive, sensitive and motive neurologic disorders caused by degenerative changes and vascular disorders the Route of administration and doses the Recommended dose: from 500 to 1000 mg of a tsitikolin a day, depending on weight of a state. Granules of a tsitikolin should be dissolved in half of glass of water. To prevent indigestion can be accepted together with food. As well as in a case with other drugs appointed according to the prescription of the doctor at reception of a tsitikolin it is important to follow indications of the instruction attentively. Tsitikolin it is necessary to accept according to instructions of the doctor. Duration of a course of treatment is defined by the attending physician. Side effects Very seldom (& lt, 1/10.000) (including individual reactions). – allergic reactions, a small tortoiseshell, a dieback, erubescence up to purple coloring, a skin itching, hypostases, development of an acute anaphylaxis – a headache, dizziness, hallucinations, excitement, insomnia, temperature increase, feeling of heat, a tremor – dispnoe – nausea, vomiting, diarrhea – increase or short-term lowering of arterial pressure of the Contraindication – hypersensitivity to drug components – patients with the raised tone of parasympathetic nervous system (vagus nerve), – a hereditary lactose intolerance, deficiency of Lapp-lactases enzyme, glucose galactose malabsorption is possible. Medicinal interactions Tsitikolin enhances effect of a levodopa. It is not necessary to apply along with medicines which contain Meclofenoxatum. During administration of drug it is impossible to take alcohol. Special instructions Due to existence in Ponso’s 4-R list, methylparahydroxybenzoate, the propilparagidroksibenzoat development of allergic reaction is possible. Drug contains sorbitol therefore patients with rare hereditary problems of intolerance of fructose should not accept. Can cause bronchial asthma, especially in patients with an allergy to acetylsalicylic acid. Children’s age Safety and efficiency of use for children are not established. Pregnancy and the period of a lactation pregnant women have no relevant data on Tsitikolin’s use. Drug should not be used during pregnancy if there is no obvious need. Drug can be used in case the expected positive effect exceeds possible risk. The feature of influence of medicine on ability to run the vehicle or potentially dangerous mechanisms does not influence. Overdose Symptoms: in view of hypotoxicity of drug, poisoning probability low, even at accidental exceeding a therapeutic dose. Treatment: Symptomatic therapy. There is no specific antidote. Forms of release and packing On 1.5 g of granules in a sachet from the laminated foil. On 10 or 30 sachets together with the instruction for medical use in the state and Russian languages place in cardboard packing. To Store storage conditions in the dry, protected from light place, at a temperature not above 25ºС. To store out of children’s reach! 2 years not to use a period of storage after the termination of the expiration date specified on packing! Prescription status According to the prescription of Kusum Heltker Pvt. Ltd., Producer JV 289 (A), Riiko Indl. Chopanki’s Area, Bkhivadi (Raj.), India Owner of the registration certificate Kusum Heltker Pvt. Ltd., India the Address of the organization accepting in the territory of the Republic of Kazakhstan claims from consumers on quality of products (goods) of Dr_-Pharm LLP, Kazakhstan, Almaty, the ave, Dostyk, 117/6, BC Khan Tengri Naimenovaniye, the address and a contact information (phone, the fax, e-mail) of the organization in the territory of the Republic of Kazakhstan responsible for post-registration observation of safety medicinal sredstvatoo Dr_-Pharm (Kazakhstan) Almaty, Dostyk Ave., 117/6, BC Khan Tengri.

5.00 average based on 1 ratings.
Add a review Cancel reply