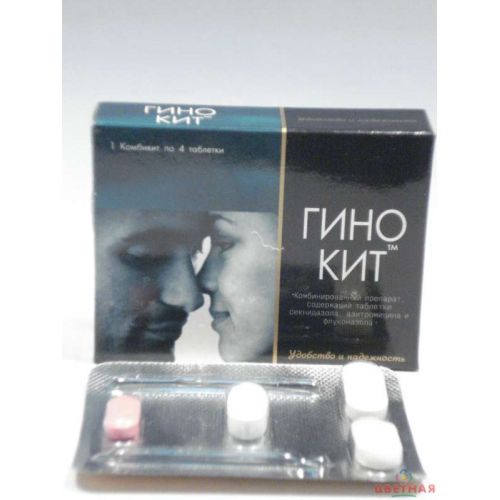 Antibacterial agents / Antiseptic and Anti-Inflammatory / Internal Use / Obstetrics and Gynecology

Seknidazol Pharmacokinetics properties quickly and almost is completely soaked up after intake. Seknidazol is well distributed in an organism, metabolized in a liver. Drug has long plasma elimination half-life which makes 20 hours and more. Obvious elimination half-life in a phase of elimination makes 28.8 hours. Drug is removed with urine.
Azithromycin is quickly soaked up after intake. Linking with proteins of plasma of azithromycin varies depending on concentration, decreasing from 51% at 0.02 MSC/ml to 7% at 2 mkg/ml. Azithromycin is widely distributed on all organism. Fast distribution of azithromycin in fabrics and achievement of high concentrations in cells provides much higher concentration of azithromycin in fabrics, than in plasma or serum. Wide distribution of drug is confirmed by inspection of fabrics and liquids of an organism. High concentrations are found in a prostate, pulmonary tissues, tissues of tonsils, in mucous a stomach, a liver and fabrics of gynecologic bodies, even in 4-5 days after reception of a single dose of azithromycin. However the concentration of drug reached in a brain remain low even after appointment repeated dosed
the Most part of a dose of azithromycin is not exposed to metabolism. There is an insignificant metabolism in a liver, metabolites are removed with bile. Elimination half-life of this phase makes about 40-60 hours. A small amount of drug is removed in not changed view with urine (6% of a dose).
Flukonazol is quickly and almost completely soaked up after intake. The bioavailability of a flukonazol after intake is more than 90%. Peak plasma concentration at reception are on an empty stomach reached in 1-2 hours, final plasma elimination half-life makes about 20-50 hours after intake.
The volume of distribution of a flukonazol is approximately equal to the volume of distribution of the general liquid of an organism. Drug badly contacts proteins of plasma (11-12%). After use of a single dose flukonazol it is found in all liquids of an organism – in saliva, cerebrospinal fluid, a phlegm, vagina tissues, a vaginal secret, in contents of blisters and nail fabrics.
Flukonazol is brought, generally through kidneys, about 80% of the accepted dose are removed with urine in the form of not changed substance, about 11% in the form of metabolites.
The pharmacodynamics
Gino Keith contains anti-mecotic means seknidazol, antibacterial drug azithromycin and antifungal means flukonazol. Three most frequent causative agents of a vaginitis are known: bacteria of Neisseria gonorrhoeae, Chlamydia trachomatis, Gardnerella vaginalis, the simplest Trichomonas vaginalis and fungi of Candida albicans (Monilia). Gino Keith is the combined means providing cumulative action at treatment of the vaginitis caused by bacteria, protozoa or fungi or the mixed etiology.
Seknidazol
Seknidazol is derivative 5 nitroimidazoles, his action is similar to effect of metronidazole. It is considered that the mechanism of effect of drug is connected with disturbance of structure of DNA. It is applied to treatment of an amebiasis, a giardiasis and a trichomoniasis. Approximately at 92-100% of patients with urogenital trichomoniasis when assigning a single dose of a seknidazol the destruction of the activator was reached.
Azithromycin
Azithromycin breaks synthesis of protein of bacterial cells by binding with 50s a subunit of ribosomes of bacteria. Does not influence synthesis of nucleic acids. Azithromycin concentrates in phagocytes and fibroblasts and promotes distribution of drug in the inflamed fabrics. Azithromycin is active concerning the majority of strains of the following microorganisms:
Gram-positive aerobes: Staphylococcus aureus, Streptococcus agalactiae, Streptococcus pneumoniae, Streptococcus pyogenes, Streptococci (C, F groups, G), Viridans group Streptococci.
Gram-negative aerobes: Haemophilus ducreyi, Haemophilus influenzae, Moraxella catarrhalis, Neisseria gonorrhoeae, Bordetella pertussis, Legionella pneumophila.
Anaerobic microorganisms: Peptostreptococcus spp, Prevotella bivia.
Other microorganisms: Chlamydia pneumoniae, Chlamydia trachomatis, Mycoplasma pneumoniae, Ureaplasma urealyticum.
Flukonazol
Flukonazol is high-selective inhibitor of alpha demethylation of the fungal S-14 sterol dependent on P450 cytochrome. Demethylation of cells of mammals is much less sensitive to inhibiting effect of a flukonazol. The subsequent loss of normal sterols is connected with accumulation 14 – alpha methylsterols in fungi that is probable, provides fungistasis of a flukonazol.
Flukonazol is active concerning Cryptococcus neoformans and Candida spp.

Side effects
– diarrhea, nausea, a spastic abdominal pain, a meteorism, vomiting, dyspepsia,
change of taste
– a headache, dizziness
– skin rashes, a Quincke’s disease, an acute anaphylaxis,
it is rare – exfoliative damages of skin
Stephens-Johnson’s syndrome, a toxic epidermal necrolysis
– a vaginitis
– pseudomembranous colitis
– is rare: ventricular arrhythmias, including ventricular tachycardia and
torsade de pointes of ventricles at patients with lengthening of an interval
of QT when assigning macroleads.
– toxic damage of a liver.

Contraindications
– hypersensitivity to nitroimidazole derivatives,
azithromycin, erythromycin, antibiotics of group of macroleads,
a flukonazol or other azolny derivatives
– heavy abnormal liver functions and kidneys
– pregnancy and the period of a lactation
– children’s age up to 12 years

Medicinal interaction
Pharmacokinetic interaction
Azithromycin
the Antacids containing aluminum and magnesium reduce peak plasma levels (absorption speed), but do not affect value of the area on a curve concentration – time (extent of absorption) azithromycin.
Pri joint purpose of macroleads and theophylline occurs increase in plasma concentration of theophylline.
Joint appointment with digoxin causes increase in plasma level of digoxin.
Joint prescribing of azithromycin and a triazolam causes decrease in clearance of a triazolam and therefore can cause increase in pharmacological action of a triazolam.
Pri the joint prescribing of azithromycin and drugs which are metabolized happens to participation of a system of P450 cytochrome increase in plasma levels of carbamazepine, a terfenadin, cyclosporine, hexobarbital and Phenytoinum.
Flukonazol
Flukonazol increases plasma concentration of Phenytoinum.
Flukonazol can increase considerably cyclosporine level at patients with a transplantirovanny kidney with a renal failure.
Rifampinum strengthens metabolism of a flukonazol at joint appointment. Depending on clinical data, it is necessary to increase a dose of a flukonazol at joint appointment with Rifampinum.
Flukonazol increases plasma concentration of theophylline. Stringent control of plasma concentration of theophylline at the patients receiving at the same time flukonazol and theophylline is necessary.
Flukonazol at joint appointment with the oral contraceptives containing ethinylestradiol and levonorgestrel causes increase in plasma levels of ethinylestradiol and levonorgestrel, however at some patients the decrease in plasma levels of ethinylestradiol and levonorgestrel to 47% and 33% was noted.
Pharmakodinamichesky interaction
Azithromycin
In clinical practice at joint purpose of macroleads with warfarin was noted strengthening of anticoagulating action.
Flukonazol
Pri joint purpose of a flukonazol and oral antihyperglycemic means strengthening of a hypoglycemia is possible. Flukonazol reduces metabolism of tolbutamide, Glyburidum and glipizid, and increases plasma concentration of these drugs.
At the patients receiving at the same time flukonazol and anticoagulants of coumarinic type, the prothrombin time can raise.
Careful observation at joint purpose of a flukonazol and terfenadin is necessary.
Pharmaceutical interaction
Azithromycin
Is necessary stringent control behind a condition of the patient at joint prescribing of azithromycin and ergotamine or dihydroergotamine as development of the toxic reaction which is characterized by a heavy spasm of peripheral vessels and a dizesteziya is possible.
Seknidazol
Nitroimidazoly can break metabolism or removal of some drugs, including warfarin, Phenytoinum, lithium drugs, cyclosporine, ftoruratsit therefore risk of development of side effects increases.
Other types of interaction. Pri joint alcohol intake nitroimidazoles, such as seknidazol, can provoke disulfiramo-like reactions at some patients.

Special instructions
the Renal failure
of Data on use of azithromycin for patients with a renal failure is not present therefore it is necessary to be careful when prescribing drug of this category of patients.
The pharmacokinetics of a flukonazol significantly changes in a renal failure. Inverse relation between elimination half-life and clearance of creatinine is noted. The dose decline of a flukonazol can be required by patients with a renal failure. the 3-hour session of a hemodialysis reduces plasma concentration of drug approximately by 50%.
Influence of drug on ability to run motor transport or potentially dangerous mechanisms
Considering side effects of medicine, it is necessary to be careful at control of motor transport and other potentially dangerous mechanisms.

Overdose
Symptoms: decrease in hearing, heavy nausea, vomiting and diarrhea.
Treatment: it is necessary to wash out a stomach and to appoint symptomatic therapy.

Storage conditions
to Store 1 blister with the instruction for use in cardboard packing in the dry place at a temperature not higher than + 250C.
To protect from direct sunshine.
To store out of children’s reach!