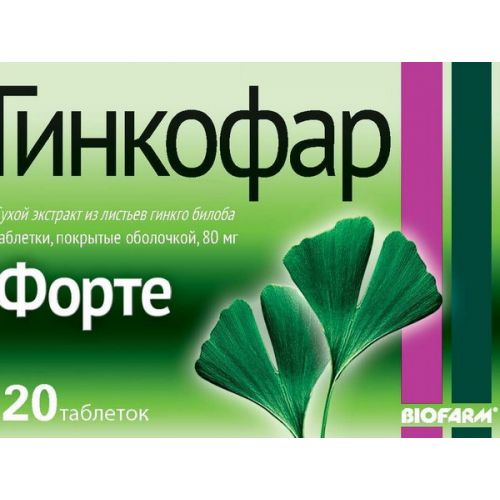 the Dosage form
of the Tablet,

The description
of the Tablet of round shape, with a biconvex surface, coated beige-yellow color, with possible impregnations.

Pharmacokinetics Later properties of oral administration flavonoids of glycosides of a ginkgo of a bilob are absorbed in a small intestine. The maximum concentration is reached in 2 hours, and elimination half-life makes 2 – 4 hours. Are metabolized in a liver. Extract is removed through lungs and also together with urine and a stake.
A pharmacodynamics
of the Tablet Ginkofar Forte contain biologically active agents of extract from leaves of a ginkgo of a bilob (flavonovy glycosides, terpenic lactones) which promote strengthening and increase in elasticity of a vascular wall, improve rheological properties of blood and thereof microcirculation, supply of a brain and peripheral fabrics with oxygen and glucose improves. Drug normalizes a metabolism in cells, interferes with aggregation of erythrocytes, brakes a factor of activation of thrombocytes. Has the dose-dependent regulating impact on the vascular system, expands small arteries, raises a tone of veins, regulates a krovenapolneniye of vessels. The mechanism of action is explained by deactivation of toxic radicals of oxygen and reduction of aging of holinoretseptor and alpha 2 – adrenoceptors.
Clinical influence of the medicine Ginkofar Forte is based on reduction of ischemia of a brain, improvement of cerebral and peripheric circulation.
Besides, the active connections which are contained in extract from leaves of a ginkgo of a bilob work okhranitelno at various neuropatiya and stimulate regeneration of axons of motor nerves (bilobalid A) therefore also use of medicine from a ginkgo of a bilob in Alzheimer’s disease and glaucoma is recommended.

Route of administration and doses
Adult: the medicine Ginkofar Forte is taken inside, after a meal, washing down a tablet with liquid.
– At disturbances of cerebral circulation: accept 2 or 3 times a day on 1 tablet,
– At disturbances of peripheric circulation: accept 2 times a day on 1 tablet.
Therapy it is necessary to spend 8-12 weeks. The first signs of improvement come, as a rule, after about 4 weeks of treatment.
After the main treatment the further drug intake of 1 – 2 time a day on 1 tablet is shown. Ginkofar Forte – is well transferable medicine and the long time can be applied.

Side effects
– skin rash, an itching
– dyspepsia
– a headache
– gastrointestinal bleedings, hemorrhages in a brain and in a retina of eyes.

Contraindications
– hypersensitivity to drug components
– the lowered blood clotting
– erosive gastritis
– a peptic ulcer of a stomach and duodenum
– acute disorders of cerebral circulation
– an acute myocardial infarction
– arterial hypotension
– children’s and teenage age up to 18 years
– pregnancy and the period of a lactation.

Medicinal interactions
Should be reported to the doctor about all, the medicine taken lately, even about those which are given without prescription.
Extract from leaves of a ginkgo of a bilob should not be applied at the same time at long therapy by aspirin, warfarin and tiazidovy diuretics.

Special indications
of Disturbance of fibrillation. Before use of the medicine Ginkofar Forte it is necessary to see a doctor or the druggist if the patient has an increased tendency to bleedings (fibrillation disturbance), hemophilia (inherited disorder of process of fibrillation) or in the past there were bleedings. Before surgery it is necessary to report to the doctor about drug intake Ginkofar Forte. It is recommended to stop drug intake in 36 hours before planirovanny surgical or dental intervention, e.g. such as extraction of tooth.
It is not necessary to exceed the recommended drug doses.
Use of medicine in an acute disorder of cerebral circulation, an acute myocardial infarction, arterial hypotonia, erosive gastritis, a peptic ulcer of a stomach and duodenum is not recommended.
Medicine contains lactose. If at the patient the intolerance of some sugars was defined earlier, the patient has to consult the doctor before medicine acceptance.
Pregnancy and the period of a lactation
it is not known of an adverse effect of extract from a ginkgo of a bilob on a fruit and the newborn. Proceeding from all-medical reasons, it is not necessary to apply Ginkofar Forte medicine during pregnancy and feeding by a breast.
Features of influence of medicine on ability to run the vehicle or potentially dangerous mechanisms

the Overdose does not influence
overdose Cases are not known for drug.

The form of release and packing
On 10 tablets place in blister strip packaging from a film polyvinylchloride / polyvinyldichloride (PVH/PVDH) and aluminum foil.
On 2 or 6 planimetric packs together with the instruction for medical use in the state and Russian languages put in a pack from cardboard.

To Store storage conditions at a temperature not above 25 °C, in original packing.
To store out of children’s reach!