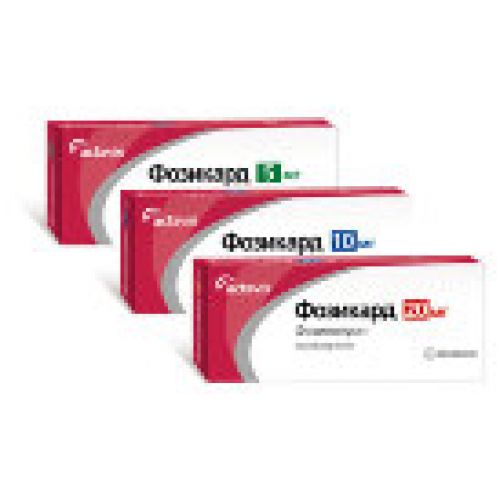 fozinoprit the Pharmacological Pharmacokinetics Absorption Later properties of intake is soaked up from digestive tract. Absorption averages 30-40%. Extent of absorption does not depend on meal, but its speed can slow down. Time of achievement of the maximum concentration in blood plasma is 3 hours.
Distribution
Communication with proteins of blood plasma – 95%. Fozinopril has rather small volume of distribution. Does not get through a blood-brain barrier.
Metabolism
In a mucous membrane of digestive tract, and partially, in a liver fozinoprit is hydrolyzed to the fozinoprilat.
Removal
Fozinoprilat is removed with bile and urine. Elimination half-life of a final phase makes 11.5 hours.
A pharmacodynamics
AKF Inhibitor (angiotensin – the converting enzyme). Treats pro-drugs. In an organism the active metabolite – fozinoprilat which interferes with transformation of angiotensin I into vasoconstrictive substance angiotensin II is formed of a fozinopril, it leads to a vazodilatation and decrease in secretion of Aldosteronum. Renders hypotensive, vazodilatiruyushchy, diuretic and kaliysberegayushchy action. Reduces the general peripheric resistance and system arterial blood pressure. Drug suppresses synthesis of Aldosteronum, inhibits fabric AKF. The hypotensive effect is caused also by suppression of metabolism of bradykinin which has the significant vasodilating effect. The lowering of arterial pressure (ABP) is not followed by change of volume of the circulating blood, a brain and renal blood-groove, blood supply of internals, skeletal muscles, skin, reflex activity of a myocardium. The hypotensive effect of drug remains at long-term treatment, the tolerance to drug does not develop. After intake the hypotensive effect develops within 1 hour, the maximum in 2-6 hours is reached and 24 hours remain.

the Route of administration and doses
Inside. The dosage has to be selected individually.
At treatment of arterial hypertension it is necessary to stop, whenever possible, reception of other hypertensive means some days before the beginning of intake of Fosicard.
The initial dose makes 10 mg of 1 times a day. The further dose of drug is selected according to the ABP indicators. The maintenance dose makes 10-40mg 1 time a day. In the absence of positive effect from monotherapy by Fosicard perhaps additional prescribing of diuretics.
If treatment by Fosicard is begun against the background of the carried-out therapy with diuretic, then its initial dose has to make no more than 10 mg at careful medical control.
At treatment of chronic heart failure the initial dose of Fosicard makes 10 mg of 1 times a day. Further the dose of drug is selected according to dynamics of therapeutic effectiveness, increasing by 10 mg with a week interval. The maximum dose makes 40 mg a day. Perhaps additional prescribing of diuretic.
To patients with a renal failure and a liver the recommended initial dose makes 10 mg a day, however, it is necessary to be careful.
Duration of a course of treatment is defined by the attending physician.

Side effects
the Frequency of emergence of side reactions is estimated thus: ‘very often’ – & gt, 1/10, is ‘frequent’ – from & gt, 1/100 to & lt, 1/10, ‘sometimes’ – from & gt, 1/1000 to & lt, 1/100, is ‘rare’ – from & gt, 1/10000 to & lt, 1/1000, is ‘very rare’ – & lt, 1/10000.
Often
– dizziness, a headache
– tachycardia
– hypotension, orthostatic hypotension
– cough
– nausea, vomiting, diarrhea, dyspepsia,
– an itching, a Quincke’s disease, dermatitis
– a stethalgia (not cardiological character), weakness
– increase in level alkaline phosphotazy, bilirubin, a lactate dehydrogenase, transaminases
Sometimes
– temporary decrease in hemoglobin, decrease in the gemokrit
– a loss of appetite, gout, a hyperpotassemia
– a depression, confusion of consciousness
– a brain heart attack, paresthesia, drowsiness, a stroke, a syncope, changes of taste, a tremor, sleep disorders

-a visual disturbance
– an ear-ache, a ring in ears
– stenocardia, a myocardial infarction, a stroke, palpitations, a stop of warm activity, disturbance of a warm rhythm, conductivity disorder
– hypertensia, shock, tranzitorny ischemia
– dispnoe, rhinitis, sinusitis, a tracheobronchitis
– a constipation, dryness in a mouth, an abdominal distension
– a hyperhidrosis, rash
– myalgia
– disturbance of functions of kidneys, a proteinuria
– sexual disorders
– increase in body weight
– increase in urea of blood, increase in serumal creatinine
Is rare
– temporary anemia, an eosinophilia, a leukopenia, a lymphadenopathy, a neutropenia, thrombocytopenia
– a dysphasia, a dysmnesia, a disorientation
– rush of blood, bleeding, a disease of peripheral vessels
– a bronchospasm, nasal bleeding, laryngitis, pneumonia, stagnation of lungs
– pancreatitis, a language swelling, a dysphagy
– hepatitis
– an ecchymoma
– arthritis
– dysfunction of a prostate
– slight increase of level of hemoglobin, a hyponatremia
Very seldom
– an agranulocytosis
– intestinal Ilheus
– a liver failure
– an acute renal failure

of the Contraindication
– hypersensitivity to drug components
– a hereditary or idiopathic Quincke’s disease, including in the anamnesis, after intake of other AKF inhibitors
– pregnancy and the period of a lactation
– a lactose intolerance, deficiency of lactase or glyukozo-galaktozny
malabsorption
– children’s age up to 18 years

Medicinal interactions
Antihypertensives, diuretics, narcotic analgetics, means for the general anesthesia strengthen hypotensive action of Fozinopril. Potassium drugs, kaliysberegayushchy diuretics increase risk of development of a hyperpotassemia. At a concomitant use with salts of lithium the increase in concentration of lithium in blood is possible. Drug enhances hypoglycemic effect of derivatives of sulphonylurea, insulin, risk of development of a leukopenia at simultaneous use with Allopyrinolum, cytostatic medicines, immunodepressants, procaineamide. Non-steroidal anti-inflammatory drugs and estrogen reduce expressiveness of hypotensive effect. At simultaneous use with antacids the administration of drugs has to be divided for 2 hours. Fozinopril can cause false low values of serumal levels of digoxin at quantitative definition with use of a method of coal absorption. Instead, other sets in which the method of the test tube covered with antibodies is used can be used. Therapy by means of a fozinopril has to be suspended some days before carrying out tests for definition of function of epithelial bodies.
Fosicard can be applied at the same time with acetylsalicylic acid (in the recommended dosages), trombolitika, beta-blockers and/or nitrates.

Special instructions
Patients with a heavy course of arterial hypertension or the accompanying dekompensirovanny chronic heart failure have to begin treatment with Fosicard in the conditions of a hospital. To take to patients with a stenosis of the mitral valve and obstruction of outflow from a left ventricle with caution.
To and during drug treatment the control of the ABP, function of kidneys, potassium concentrations, hemoglobin contents, creatinine, urea, concentration of electrolytes and activity of hepatic enzymes in blood is necessary, at increase in transaminase it is necessary to stop drug uses.
Against the background of intake of Fosicard it is necessary to control periodically quantity of leukocytes in peripheral blood, especially patients with the increased risk have neutropenias: in a renal failure and general diseases of connective tissue.
Because of the increased risk of developing arterial hypotension the patients who are on a low-salt or saltless diet need to be careful when prescribing drug.

The feature of influence on ability to run the vehicle or potentially dangerous mechanisms
needs to be careful at control of vehicles or when performing any work requiring special attention because of possible appearance of dizziness, especially after an initial dose of drug at the patients accepting diuretic medicines.

Overdose
Symptoms: significant decrease in the ABP, bradycardia, shock, disturbance of water and electrolytic balance, acute renal failure, stupor.
Treatment: to stop administration of drug, to place the patient in situation lying with the raised legs. In mild cases of overdose – gastric lavage, introduction of sorbents and sodium of sulfate within 30 minutes after reception, and further the symptomatic and supporting treatment. Use of a hemodialysis is inefficient.

A period of storage
2 years
it is impossible to use Drug after the expiration date specified on packing.

the Owner of the registration certificate
of Aktavis Group, Iceland

the Address of the organization accepting in the territory of the Republic of Kazakhstan claims on quality of products from consumers:
Representative office of Aktavis International Ltd in
Almaty Republic of Kazakhstan, 050009, Almaty, Mukanov St. 241-1 A.
Ph./fax: 8 (727) 313 74 30, 313 74 31,
E-mail address: actavis@actavis.kz, website: