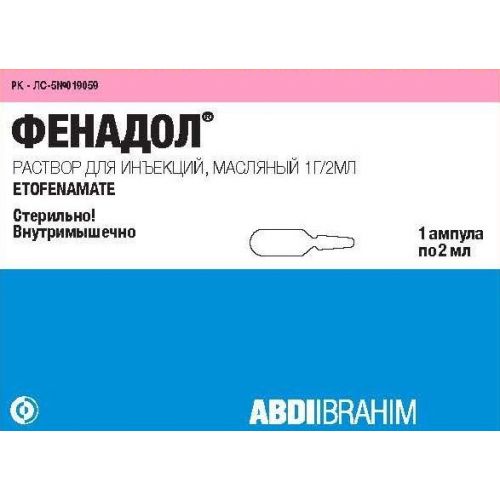 The instruction for medical use of FENADOL® medicine the Trade name of Fenadol® the International unlicensed name Etofenamat Lekarstvennaya a form Solution for injections, oil 1g/2ml Structure of 1 ml of solution contains active agent – etofenamat 500 mg excipient – oil the coconut fractional Description Light yellow transparent Solutio oleosa Pharmacotherapeutic group Non-steroidal anti-inflammatory drugs. Fenamata. Etofenamat. The ATX M01AG code the Pharmacological Pharmacokinetics Solutio Oleosa properties of the etofenamat works more for a long time, than its aqueous solution. Active agent is slowly released from a dosage form owing to what effect of drug continues till 24 o’clock. The maximum plasma concentration is reached within 2 hours. Communication with proteins of plasma makes 98-99%. Plasma concentration go down in 24 hours for 20%, and in 48 hours the content of active agent is 3%. Etofenamat is metabolized to flufenamovy acid and two aromatic substances 5.4 of hydroxy of derivative connection of the etofenamat. Further these metabolites form conjugates with glucuronic acid. It is brought approximately to 35% in the form of metabolites and conjugates through kidneys, generally – bile. Elimination half-life makes about 1.9 hours, final elimination half-life (terminal half-life) – 34.5 hours. The therapeutic effect is shown through ½ – 1 h and more than 24 Parts last. A pharmacodynamics the Non-steroidal anti-inflammatory drug possessing the significant soothing and febrifugal action with weak anti-inflammatory effect. The mechanism of action is connected with formation of flufenamovy acid which has the oppressing effect on activity of enzyme of cyclooxygenase. Analgeziruyushchy action is caused by two mechanisms: peripheral (indirectly, through suppression of synthesis of prostaglandins) and central (at the expense of inhibition of synthesis of prostaglandins in the central and peripheral nervous system). Oppression of synthesis of prostaglandins prevents development of a hyperalgesia. Raises a sensitivity threshold to painful incentives. Indications In acute, sharp pains: – musculoskeletal system disease: the pseudorheumatism ankylosing a spondylitis, a muscular spasm in omalgias, a lumbago, a sciatica tendosinovit, the bursitis, inflammatory diseases connected with mechanical or degenerative destruction of vertebras or joints (arthritises, arthroses) – injuries, including sports: bruises, sprain, damages – postoperative hypostasis or inflammation the Route of administration and doses of Fenadol® is entered by the adult deeply intramusculary in a dose of 1 g (2 ml) of 1 times a day. If necessary, in 24 hours perhaps repeated administration of drug. Maximum daily and single dose of 1.0 g. Side effects Seldom – pain, consolidation, an erythema, reddening, a tumor and an itching in the injection site – a headache, dizziness – exhaustion, an asthenic syndrome (fatigue) – disorders of vision – rash and allergic hypostasis – skin rashes – pains in epigastriums – digestion disturbance – nausea – vomiting – an urodynia Very seldom – increase in fecal excretion of fat – pancreatitis – disturbance of a picture of blood (change of indicators of leukocytes, erythrocytes and thrombocytes) – disturbance of functions of a liver – a renal failure – the Contraindication depression – hypersensitivity to drug or its components – asthma – chronic obstructive respiratory diseases – hay fever (pollinosis) – possible fever or chronic inflammation of a mucous membrane of a nasal cavity (as result of the increased reaction to nonsteroid anti-inflammatory medicines (Quincke’s edema) – disturbances of a gematopoez – treatment by anticoagulants or inhibitors of aggregation of thrombocytes, disturbances of blood clotting – functional unsufficiency of hepatic, kidneys or heart – a peptic ulcer of a stomach or a 12-perstny gut – pregnancy and the period of a lactation – the children’s and teenage age up to 18 years Medicinal interactions of Fenadol® at intramuscular introduction lowers effect of various diuretics (furosemide, tiazid) and antihypertensive drugs (beta blockers). Gipourikemichesky means (probenetsid and Sulfinpyrazonum) can slow down removal of the etofenamat kidneys. Researches of simultaneous use of a fenadol, drugs of digoxin, Phenytoinum, a methotrexate and oral antidiabetic means are absent, however by results of experiments of studying interactions of similar substances, increase in activity and toxicity of these drugs is possible. Corticosteroids (adrenocorticoid hormones), drugs of other NPVS and alcohol can increase side gastrointestinal effects of a fenadol. Special instructions At a sharp porphyria it is appointed taking into account a ratio of expected advantage / risk. In the presence in the anamnesis of inflammatory bowel diseases (ulcer colitis, Crohn’s disease) and hypertensia, after massive surgical interventions and the patient of advanced age to use drug under strict medical observation. Features of influence of medicine on ability to run the vehicle or potentially dangerous mechanisms Slows down mental and motive abilities that has to be considered during the driving of transport and work by cars. Alcohol intake strengthens these reactions. Overdose Symptoms: headache, dizziness, insomnia, fatigue, disorder of vision, nausea, vomiting, abdominal pain, meteorism, diarrhea. Treatment: symptomatic therapy (use of corticosteroids, antihistamines and adrenaline). The form of release and packing On 2 ml of drug place in ampoules of transparent colourless glass with a tag for opening. On 1 ampoule place in plastic planimetric packing. On 1 planimetric packing together with the instruction for medical use in the state and Russian languages put in a cardboard box. To Store storage conditions in the dry, protected from light place, at a temperature not over 25 ˚ S. Hranit out of children’s reach! Not to freeze! 2 years not to apply a period of storage after the expiration date specified on packing Prescription status According to the prescription the Producer / Packer by Idol Ilac Dolum Sanayi ve Ticaret A.S., Turkey the Owner of the registration certificate of ABDI IBRAHIM Istanbul, Turkey the Name, the address and a contact information of the organization in the territory of the Republic of Kazakhstan, the accepting claim (offer) on quality of medicines from consumers and responsible for post-registration observation of safety of medicine: Abdi Ibrahim Global Pharm LLP, Republic of Kazakhstan, Almaty Region, Iliysky area, Industrial zone 282, ph.: +7 (727) 356-11-00, 8-800-070-1100,