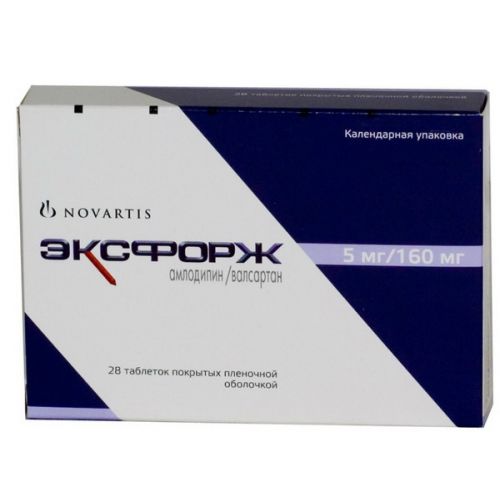 Pharmakokinetika Eksforzha Pharmacokinetics properties are characterized by linearity. As pharmacokinetic interaction between valsartany and amlodipiny is absent, the pharmacokinetics for each drug separately is given below.
Amlodipin
Posle of intake of an amlodipin in therapeutic doses the maximum concentration of an amlodipin in blood plasma is reached in 6-12 hours. Values of absolute bioavailability by calculations are between 64% and 80%. Meal does not affect bioavailability of an amlodipin. The volume of distribution is about 21 l/kg. 97.5 the % of the circulating drug contacts proteins of plasma. Amlodipin intensively (90%) is metabolized in a liver with formation of active metabolites. Removal of an amlodipin from plasma has two-phase character with terminal elimination half-life from 30 to 50 hours. Equilibrium concentration in plasma are reached after long use within 7-8 days. Ten percent of not changed amlodipin and 60% of an amlodipin in the form of metabolites are removed with urine.
Valsartan
Posle of intake of one valsartan the maximum concentration of a valsartan is reached in 2-3 hours. The average absolute bioavailability is 23%. Valsartan has the multiexponential nature of parameters of removal (t 1/2α & lt, 1 h and t 1/2 ß about 9 h). Food reduces bioavailability (on AUC value) for 40% and the maximum concentration in blood plasma (Cmax) honor a valsartan for 50% though almost in 8 h after reception of concentration of a valsartan in blood plasma are identical as in at meal, and on an empty stomach. This reduction of AUC, however, is not followed by clinically significant reduction of therapeutic effect, valsartan, thus, it is possible to appoint or with meal or on an empty stomach. In an equilibrium state the volume of distribution of a valsartan after intravenous administration is 17 l that ukazyvt on lack of extensive distribution of a valsartan in fabric. Valsartan highly contacts proteins of serum (94-97%), mainly serum albumine. Valsartan is not exposed to the significant metabolism since only about 20% of a dose are defined in the form of metabolites. The hydroxyl metabolite is identified in plasma in low concentration (less than 10% of AUC of a valsartan). This metabolite pharmacological is active. Vasartan is brought generally in not changed view with a stake (about 83% of a dose) and generally in not changed view with urine (about 13% of a dose). Posle of intravenous administration, plasma clearance of a valsartan makes about 2 l/h and its renal clearance is 0.62 l/h (about 30% of the general clearance). Elimination half-life of a valsartan makes 6 hours.
Eksforzh
After drug Eksforzh intake the maximum concentration of a valsartan and amlodipin are reached in 3 and 6-8 hours, respectively. Speed and extent of absorption of Eksforzha are equivalent to bioavailability of a valsartan and an amlodipin at reception of each of them in the form of tablets.
The pharmacodynamics
of Eksforzh is a combination of two antihypertensive substances with the mechanism of control of arterial blood pressure supplementing each other at patients with essential hypertensia: amlodipin belongs to the class of antagonists of calcium and valsartan to a class of drugs of antagonists of angiotensin II. The combination of these ingredients has additive antihypertensive effect, reducing arterial blood pressure more than each component separately.
At reception of Eksforzha in a single dose the antihypertensive effect remains during 24 h. At long use the effect of Eksforzha remains during 1 year. Sudden cancellation of Eksforzha is not followed by fast increase in arterial blood pressure. At patients at whom arterial blood pressure was adequately controlled amlodipiny, but at which extremely profound hypostasis was observed, at combination therapy the same control of arterial blood pressure was reached with less profound hypostasis. Age, sex and race do not affect efficiency of Ekforzha.

Indications
– treatment of essential hypertensia at inefficiency of monotherapy

Side effects
Side effects are given according to their frequency, using the following concepts: very often (≥ 1/10), it is frequent (& gt, 1/100, ≤ 1/10), infrequently (& gt, 1/1000, ≤ 1/100), is rare (& gt, 1/10000, ≤ 1/1000), is very rare (& lt, 1/10000), including separate messages.
Very often
– vomiting
Often
– a headache
– grippopodobny symptoms, a nasopharyngitis
Infrequently
– dizziness, drowsiness
– change of mood
– peripheral neuropathy
– tachycardia, short wind
– a Quincke’s disease
– orthostatic hypotension
– cough, a sore throat and throats
– rhinitis, sinusitis
– abdominal pain
– a constipation, disturbance of a chair, diarrhea, dyspepsia
– gastritis, pancreatitis, hepatitis
– nausea
– dryness in a mouth
– a hyperplasia of gums
– a dorsodynia
– arthralgias
– puffiness of joints
– a vasculitis
– an erythema
– a gynecomastia
– a hyperglycemia
– a leukopenia, thrombocytopenia
– increase in creatinine
Is rare
– illegibility of sight
– paresthesia
– excitement
– sonitus
– a syncope
– the increased perspiration
– a small tortoiseshell
– muscular spasms
– heavy feeling in legs
– the speeded-up urination, a polyuria
– edemas of face, the lower extremities
– a fluid lungs
– feeling of inflows
– an asthenia, increased fatigue
– disturbance of erektivny function
is Very rare
– significant changes of indicators of laboratory tests, namely increases in urea nitrogen in

Contraindication blood
– hypersensitivity to active substance or to any of excipients
– heavy abnormal liver functions, biliary cirrhosis and a cholestasia
– an anury, heavy renal failures (clearance of creatinine & lt, 30 ml/min.)
– the profound arterial hypotension
– pregnancy and a lactation
– the children’s and teenage age up to 18 years

Medicinal interactions
At use of Eksforzha is safe a combination to thiazide diuretics, beta-blockers, inhibitors of the angiotezin-turning enzyme, is long the operating nitrates, sublingual nitroglycerine, digoxin, warfarin, atorvastatiny, sildenafily, маалоксом®, Cimetidinum, non-steroidal anti-inflammatory drugs, antibiotics and oral hypoglycemic drugs.
And there is also no clinically significant interaction with the following drugs: Cimetidinum, warfarin, furosemide, digoxin, atenolol, indometacin, hydrochlorothiazide, amlodipin, glibenclamide.
At simultaneous use with the dietary supplements containing potassium, kaliysberegayushchy diuretics, kaliysoderzhashchy substitutes of salt or with other drugs which can cause increase in potassium concentration in blood (for example, with heparin) the care and frequent definition of potassium concentration in blood is required.

Special instructions
Patients with deficiency of sodium and/or reduction (volume of the circulating
blood) OCK
U of patients with uncomplicated hypertensia was observed excessive hypotension. At patients with the system activated renin-angiotensin-aldosteronovoy (in such cases as deficit of OCK and/or salts at the patients receiving diuretics in high doses) who receive blockers of angiotenzinovy receptors, development of symptomatic arterial hypotension is possible. Correction of this state before purpose of Eksforzha or careful medical observation at the beginning of therapy is recommended. If at reception of Eksforzha the hypotension is observed, then the patient should be placed in horizontal position, if necessary to appoint intravenous infusion of normal saline solution. Treatment should be continued until stabilization of arterial blood pressure.
The hyperpotassemia
At simultaneous use with the dietary supplements containing potassium, kaliysberegayushchy diuretics, kaliysoderzhashchy substitutes of salt, or with other drugs which can cause increase in potassium concentration in blood (for example, with heparin) is required care and frequent definition of potassium concentration in blood.
Abnormal liver functions
Extra care should be observed when assigning Eksforzha to patients with diseases of a liver and obstructive diseases of bilious ways.
The renal failure
from easy to moderate extent of dose adjustment of Eksforzha is not required to Patients with renal failures.
Stenosis of aortal and mitral valves, subaortic hypertrophic stenosis
the Extra care is shown for the patients having an aortal or mitral stenosis, or a subaortic hypertrophic stenosis.
Pregnancy and a lactation
of Eksforzh it should not be appointed to women who plan pregnancy. The doctor has to warn the woman about potential risk when assigning Eksforzha at pregnancy. If in the course of therapy the pregnancy is established, administration of drug needs to be stopped immediately.
The feature of influence of medicine on ability to run motor transport or other potentially dangerous mechanisms
Is recommended to be careful during the driving of the car and control of mechanisms.

Overdose
Symptoms
the Profound hypotension with dizziness and also the accruing perefirichesky vazodilatation and reflex tachycardia.
It was reported about the considerable and potentially prolonged system hypotension, up to shock and a fatal outcome.
Treatment
If administration of drug happened recently, it is necessary to cause vomiting or to carry out gastric lavage. Absorption of Eksforzha considerably decreases when using activated carbon at once or for 2 hours after reception.
Clinically significant arterial hypotension caused by overdose of Eksforzha demands active support of a condition of a cardiovascular system, including constant control of warm and respiratory function, raising of extremities and attention to the volume of the circulating liquid and urination. For restoration of a vascular tone and blood pressure there can be useful a vasoconstrictor, when accounting lack of contraindications for its use. For lifting the siege of calcium channels there can be reasonable an intravenous administration of calcium of a gluconate.

To Store storage conditions at a temperature not higher than + 300C.
To store out of children’s reach!

The period of storage

Drug should not be used 3 years after the term specified on packing.

the Address of the organization accepting in the territory of the Republic of Kazakhstan claims from consumers on quality of products (goods)
Branch of the Novartis Pharm Servisez AG Company in
Kazakhstan Almaty, Zhamakayev St. 155 A,
phone number: 258-12-94, fax: 250-64-63
E-mail address: