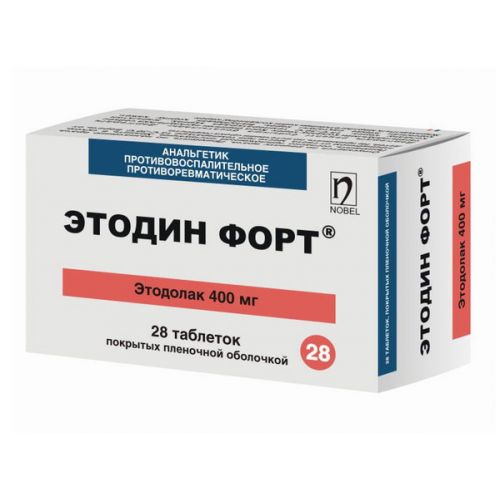 The description
Oblong, film coated light pink color, a tablet with a biconvex surface, with risky on one party and the inscription Nobel on other party.

Pharmacokinetics FORT® ETHODINUM properties is well soaked up at oral administration and reaches peak concentration in plasma approximately in 1 hour after reception. The peak of concentration in plasma makes 18 mkg/ml. Well contacts proteins of plasma, and in a stand-at-ease varies between 1.2% and 4.7%. The bioavailability is 68 mkg/ml/h, elimination half-life of 7 hours, the volume of distribution of 0.4 l/kg, clearance of plasma of 41 ml/h/kg. The bioavailability of an etodolak does not change under the influence of food and antacids.
The pharmacodynamics
FORT® ETHODINUM is indolderivative non-steroidal anti-inflammatory drug (NPVS). FORT® ETHODINUM differs from other non-steroidal anti-inflammatory drugs in existence of a tetragidropiranoindolovy kernel, has anti-inflammatory, soothing and febrifugal effect. Etodolak inhibits synthesis of prostaglandins in the field of inflammation, and, thus, reduces sensitivity of pain receptors to inflammation mediators (histamine, serotonin and kinina). Etodolak inhibits enzyme cyclooxygenase (COG-2) and also has uricosuric activity.

Indications
– a pain syndrome in an osteoarthrosis, a pseudorheumatism, an ankylosing spondylitis

the Route of administration and doses
the Recommended daily dose of the drug FORT® ETHODINUM makes 1-2 tablets (400-800 mg) in 1 or 2 receptions, to accept after a meal. The maximum daily dose makes 800 mg.
To patients with the body weight of 60 kg and less general daily dosage should not exceed 20 mg/kg of body weight.
Correction of a dosage is not required to elderly patients.

Side effects
– loss of appetite, nausea, vomiting, pains in epigastriums, diarrhea, dyspepsia, an abdominal distension, a constipation, heartburn, ulcer of stomach or duodenum (perforation or bleeding, sometimes and from the death), rectal bleeding
– short-term and moderate increase in level of transaminases
of blood serum, toxic hepatitis
– urticaria, photosensitivity, an itching, a multiformny erythema, a bronchospasm, anaphylactic reactions, a Quincke’s edema, a bullous dermatosis, Stephens-Johnson’s syndrome, a toxic epidermal necrolysis
– a headache, dizziness, increased fatigue, a ring in ears, insomnia, confusion of consciousness, a hallucination, a disorientation, paresthesia, a tremor, weakness, nervousness, drowsiness, aseptic meningitis (especially at patients with autoimmune diseases, such as system lupus erythematosus, diseases of connective tissue is possible)
– a retinopathy, a keratopathy, disorders of vision, an optic neuritis
– hypertensia, heartbeat, heart failure, vasculites
– a dysuria (urodynia), interstitial nephrite, a nephrotic syndrome, a renal failure, hypostases, a delay of liquid and electrolytes
– hemolytic anemia, aplastic anemia, thrombocytopenia, a leukopenia, a neutropenia, an agranulocytosis, lengthening of a bleeding time
– cold, a sore throat, flu symptoms, hoarseness of a voice, swallowing disturbance, an asthenia, a fever, fever
– formation of hematomas, small bleedings.
Clinical trials and epidemiological data show that use of some NPVS (especially in high doses), can be connected with the increased risk of development arterial fibrinferment (for example, a myocardial infarction or a stroke).

Contraindications
– hypersensitivity to an etodolak or other components of drug, other non-steroidal anti-inflammatory drugs
– a peptic ulcer of a stomach and duodenal (including in the anamnesis)
– gastrointestinal bleedings (including in the anamnesis)
– instructions in the anamnesis on development of a triad of symptoms (asthma, rhinitis, allergic rash or a Quincke’s edema) after use of aspirin or non-steroidal anti-inflammatory drugs
– children’s and teenage age up to 18 years
– a severe form of renal, liver and heart failure
– pregnancy and the period of a lactation

Medicinal interactions
At combined use FORT® ETHODINUM with:
– the drugs which are well contacting proteins of blood plasma it is necessary to adjust a dosage as FORT® ETHODINUM also well contacts proteins of blood plasma. Acetylsalicylic acid and warfarin reduce linking with proteins of plasma,
– oral anticoagulants and heparin, potentiation of irritant action of oral anticoagulants and heparin on mucous a stomach,
– sulphonylurea drugs is observed, there is strengthening of hypoglycemic effect of drugs of sulphonylurea,
– lithium drugs, it is necessary to control onto concentration of lithium in plasma as FORT® ETHODINUM can cause increase in concentration of lithium in plasma,
– a methotrexate, toxic action of a methotrexate on a hematopoiesis,
– diuretics is exponentiated, the activity of diuretics can be weakened,
– tiklodipiny, antiagregantny action of a tiklopidin on thrombocytes,
– other non-steroidal anti-inflammatory drugs decreases, risk of developing ulcers mucous a stomach and bleedings,
– Phenytoinum increases, exponentiates effect of Phenytoinum,
– with cardiac glycosides, can strengthen heart failure, reduce glomerular filtration rate and increase the level of glycosides in blood plasma,
– cyclosporine, enhances nephrotoxic effect,
– mifepristone, does not follow to apply after intake of mifepristone of 8-12 days as reduces effect of mifepristone,
– hinolonam, increases risk of spasms (convulsion),
– zidovudines, increases risk of hematologic toxicity, is the probability of increase in risk of developing a hemarthrosis and hematoma at HIV-positive people and patients with hemophilia,
– takrolimusy, raises the risk of nephrotoxicity,
– antiagregantny drugs and selective serotonin reuptake inhibitors, increases risk of developing gastrointestinal bleeding.
Antacids can lower Cmax (by 15–20%).
Use of a reactant of Ehrlich for determination of level of bilirubin can yield false positive result.

Special instructions
As well as other non-steroidal anti-inflammatory drugs, FORT® ETHODINUM possesses antiagregantny action therefore the patients receiving anticoagulants have to be under observation. In case of developing of gastrointestinal bleeding the treatment should be stopped.
With care patients should apply with arterial hypertension, heart failure, cirrhosis, nephrites, a chronic renal and liver failure and also to the patients accepting diuretics. At elderly patients it is long accepting FORT® ETHODINUM in an initiation of treatment it is necessary to check function of a liver, kidneys and blood indicators.
The corresponding monitoring and consultations are necessary for patients with arterial hypertension and/or easy (to moderate congestive) heart failure as the delay of liquid and hypostases connected with reception of NPVS is possible.
Clinical trials and epidemiological data allow to assume that use of some NPVS (especially at high doses and at long-term treatment) can be connected with small increase in risk of arterial thrombosis (for example, a myocardial infarction or a stroke). There are not enough data to exclude such risk for the drug FORT® ETHODINUM.
Patients with uncontrollable arterial hypertension, stagnant heart failure, with coronary heart disease, with diseases of peripheral arteries and/or a cerebrovascular disease should appoint FORT® ETHODINUM after careful inspection and observation. Also patients with risk factors of developing cardiovascular diseases (arterial hypertension, a lipidemia, diabetes, smoking) have to be under observation before long-term treatment about FORT® ETHODINUM.
In spite of the fact that NPVS does not influence thrombocytes as aspirin, all drugs inhibiting biosynthesis of prostaglandins can have negative effect on function of thrombocytes. The patients suffering from oppression of function of thrombocytes have to be under observation of the doctor.
With care patients should apply with bronchial asthma as drug can cause a bronchospasm.
Patients with the system lupus erythematosus (SLE) and disturbances of functions of connective tissue can have an increased risk of developing aseptic meningitis.
Serious skin reactions, some of them can be lethal, including exfoliative dermatitis, Stephens-Johnson’s syndrome and a toxic epidermal necrolysis, were registered in connection with use of NPVS. Patients are in group of high risk of emergence of these reactions at the beginning of a therapy course (within the first month of treatment). FORT® ETHODINUM needs to be cancelled at the first appearance of skin rash, defeat mucous, or any other reaction connected with hypersensitivity.
The drug FORT® ETHODINUM can have negative impact on women’s reproductive function therefore it is not recommended to the women trying to conceive the child. The women having difficulties with conception or undergoing inspection concerning infertility need to take it into account before use of the drug FORT® ETHODINUM.
It is not necessary to use drug to patients with hereditary intolerance of fructose, deficiency of Lapp-lactases enzyme, malabsorption of glucose galactose
of Feature of influence of medicine on ability to run the vehicle or potentially dangerous mechanisms
Considering side effects of drug it is necessary to observe care during
the driving and work with potentially dangerous
mechanisms.

Overdose
Symptoms: a headache, nausea, vomiting, pains in epigastriums, gastrointestinal bleedings. Seldom – diarrhea, a disorientation, excitement, a coma, drowsiness, dizziness, sonitus, a faint, spasms. In case of severe poisoning the development of an acute renal and liver failure is possible. Treatment: symptomatic, if necessary administration of anticonvulsant drugs, within the first hour after administration of drug – gastric lavage, prescribing of activated carbon, control of function of kidneys and a liver. Patients have to be observed during, at least four hours after the use of potentially toxic amounts of drug.

The form of release and packing
On 7 tablets place in blister strip packaging from a film of polyvinylchloride and printing aluminum foil.
On 1, 2 or 4 planimetric packs together with the instruction for medical use in the state and Russian languages place in a pack cardboard with the hologram of firm – producer

to Store Storage conditions at a temperature not higher than 25 wasps in the dry, protected from light place.
To store out of children’s reach!