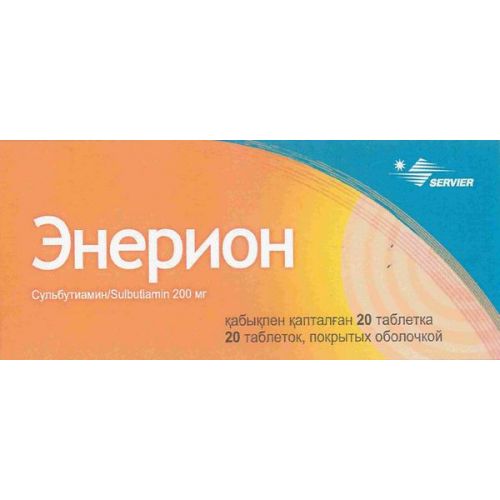 The instruction for medical use of ENERION medicine the Trade name of ENERION the International unlicensed name Sulbutiamin Lekarstvennaya the Tablet form, coated, 200 mg Structure One tablet contains active agent – sulbutiamin 200 mg, excipients: anhydrous glucose, lactoses monohydrate, magnesium stearate, starch corn, paste starched, talc, cover: white beeswax, sodium of a karmelloz, ethyl cellulose, glycerin monooleate, polysorbate 80, povidone, silicon dioxide colloidal anhydrous, Natrii hydrocarbonas, sucrose, dye yellow sunset of FCF, varnish aluminum (E110), talc, titan dioxide (E171). The description of the Tablet of a lenticular form, the Vitamins covered with a sugar cover of orange color Pharmacotherapeutic group. B1 vitamin and its combination with B6, B12 vitamins. B1 vitamin. Sulbutiamin the ATX A11DA02 Code the Pharmacological Pharmacokinetics Later properties of intake sulbutiamin is quickly soaked up from the digestive tract (DT). The maximum concentration of drug (Cmax) in blood plasma is reached in 1-2 hours. It is metabolized in a liver. Elimination half-life (T1/2) makes about 5 hours. It is removed with urine. A pharmacodynamics Sulbutiamin – the synthetic connection close in structure to thiamine. The molecule of a sulbutiamin has an open triazolny cycle, an additional disulfide bridge and lipophilic ether. Thanks to such modification it is quickly soaked up from a GIT and easily gets through a blood-brain barrier. Unlike thiamine, it is capable to collect in cells of a reticular formation and a hippocampus and also in cells of Purkinye fibers and balls of a granular layer of bark of a cerebellum. Against the background of reception of ENERION the coordination of movements improves and resistance to physical activities increases, resistance of structures of a cerebral cortex to the repeating hypoxia increases. Indications – treatment of the states which are followed by apathy and decrease in physical activity the Route of administration and doses the Adult drug appoint 400-600 mg (2-3 tablets) divided into two receptions in a daily dose. A pill should be taken inside during a breakfast and during a lunch, washing down with a glass of water. Duration of a course of treatment should not exceed 4 weeks. Side effects At treatment were observed the following undesirable phenomena distributed on frequency according to the following gradation: very often (³1/10), it is frequent (from ³1/100 to & lt, 1/10), infrequently (from ³1/1000 to & lt, 1/100), is rare (from ³1/10,000 to & lt, 1/1000), is very rare (& lt, 1/10,000), it is unknown (it is impossible to calculate on the available data). Infrequently – excitement – a headache, a tremor – nausea, vomiting – allergic reactions (rash) – the indisposition Is unknown – the stomach ache, diarrhea the Description of the separate undesirable phenomena In view of presence of sunset yellow FCF dye (E 110) exists risk of allergic reactions. There is no contraindication – hypersensitivity to active agent or to any of excipients – children’s and teenage age up to 18 years – persons with hereditary intolerance of fructose, deficiency of Lapp-lactases enzyme, glucose galactose malabsorption Medicinal interactions of Data on interaction with other drugs. At simultaneous use of drug it is necessary to consider – diuretics: thiamine excretion (metabolite of a sulbutiamin) in urine increases. – nervoblokiruyushchy agents: effect of these drugs can be increased at introduction together with thiamine (a metabolite sulbutiamin). Special instructions At the established depression episode this drug does not cancel need of specific antidepressive therapy. Pregnancy and the period of a lactation Due to the lack of sufficient clinical data reception of ENERION during pregnancy and a lactation is not recommended. Features of influence of medicine on ability to run the vehicle and potentially dangerous mechanisms Drug does not affect ability to driving and potentially dangerous mechanisms. Overdose Symptoms – the excited state which is followed by euphoria and a tremor of extremities. Treatment is symptomatic. The form of release and packing On 10 tablets place in blister strip packaging from a film of polyvinylchloride and aluminum foil. On the 2nd blister strip packagings together with the instruction for medical use in the state and Russian languages put in a pack cardboard. To Store storage conditions at a temperature not above 25 °C. To store out of children’s reach! 3 years not to apply a period of storage after an expiration date. Prescription status Without prescription Les Laboratoires Servier Industrie Producer, France the Owner of the registration certificate of Les Laboratoires Servier, France the Name, the address and a contact information (phone, the fax, e-mail) of the organization accepting in the territory of the Republic of Kazakhstan a claim (offer) on quality of medicines from consumers responsible for post-registration observation of safety of medicine of Servye Kazakhstan LLP 050020, Almaty, Dostyk Ave of 310 g, Business center, the 3rd floor Ph.: (727) 386 76 62/63/64/70/71 Fax: (727) 386 76 67 E-mail: kazadinfo@servier.com