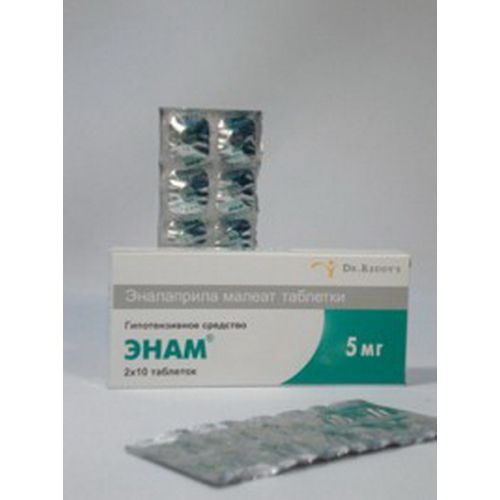 of Enam® medicine
the Trade name
of Enam®

Pharmacokinetics Later properties of intake enalapril is soaked up from digestive tract, absorption – 60%. Meal does not influence absorption. The bioavailability of drug is 53 – 74%, linking with proteins of blood plasma – 50%. The maximum concentration in blood is reached in 3 – 4 hours after administration of drug inside. Action duration 12 – 24 hours. Drug is metabolized in a liver, a part is hydrolyzed in enalaprilat therefore at patients with abnormal liver functions time of the maximum action can increase. Enalaprilat easily passes through gistogematichesky barriers, excepting GEB, a small amount gets through a placenta and into breast milk. Elimination half-life (T1/2) of enalaprilat – 11 hours. It is removed mainly by kidneys – 60%, through intestines – 33%. Is removed at a hemodialysis (speed of 62 ml/min.) and peritoneal dialysis.
A pharmacodynamics
Enam – antihypertensive drug which mechanism of action is connected with oppression of activity of the angiotensin-converting enzyme leading to reduction of formation of angiotensin – II. Enam is pro-medicine of which in an organism the active metabolite enalaprilat is formed. Believe that the mechanism of antihypertensive action is connected with competitive inhibition of activity of APF which leads to reduction in the rate of transformation of angiotensin I into angiotensin II (which has the significant vasoconstrictive effect and stimulates secretion of Aldosteronum in bark of adrenal glands). Reduction of concentration of angiotensin II
is resulted by secondary increase in activity of renin of plasma due to elimination of negative feedback at release of renin and direct decrease in secretion of Aldosteronum. Besides, enalaprilat, apparently, affects a kinin-kallikrein system, interfering with bradykinin disintegration.
Along with a lowering of arterial pressure, drug reduces before – and an afterload by a myocardium in heart failure, reduces pressure in the right auricle in a small circle of blood circulation, lowers resistance in vessels of kidneys that contributes to normalization of blood circulation in them.

Enam appoint the Route of administration and doses inside irrespective of meal time.
For the patients who are not receiving diuretics – the recommended initial dose of 5 mg a day. Further the dose is selected individually. Usually the dose from 10 to 40 mg a day in one or two receptions is required.
For the patients receiving diuretics – for the purpose of prevention of hypotension for 1 – 2 day before Enam’s appointment, diuretic should be cancelled. In case of impossibility to cancel diuretic, the recommended initial dose of Enam – 2.5 mg.
In chronic heart failure
it is better to Begin treatment with a dose of 2.5 mg of 1 times a day. The effect of administration of drug should be expected 3 – 4 days. Constant control of arterial blood pressure is necessary. Then reception of 2.5 mg 2 times a day within 3 – 4 days is recommended.
Since second week, the dose is increased if necessary to 10 mg of 1 times a day.
On 3 – 4 week the dose is increased up to 20 mg in one or two receptions if systolic pressure is not lower than 100 mm Hg. The maximum daily dose – 40 mg.
Selection of a dose and further treatment can be carried out on an outpatient basis, at the same time it is necessary to estimate the patient’s condition not less than 1 time a month (only at selection of a dose the survey and control of the doctor is required each 10 days), to carry out control of content of creatinine and electrolytes of blood. Presence of arterial hypotension up to 80/60 mm Hg. against the background of maintenance therapy in the absence of complaints at the patient is not a reason for drug withdrawal.
In the arterial hypertension caused by a nephropathy in patients with diabetes
the Dosage of drug depends on that, is followed or not a diabetic nephropathy by arterial hypertension. If the diabetic nephropathy proceeds against the background of normal arterial blood pressure, then use small doses of Enam – 2.5 or 5 mg a day. If the nephropathy is followed by arterial hypertension, then doses select as well as in arterial hypertension (as much as possible up to 40 mg a day).
In a renal failure
For patients from whom clearance of creatinine higher than 30 ml/min. (creatinine level in blood is not higher than 3 ml/min.) dose adjustment is not required.
At clearance of creatinine less than 30 ml/min. the recommended initial dose no more than 2, 5 mg a day.
Further selection of a dose is carried out individually under control of level of creatinine and electrolytes of blood. For the patients who are on a hemodialysis, the initial dose and a dose in days of dialysis should not exceed 2.5 mg a day. Duration of treatment depends on efficiency of therapy. At expressed a lowering of arterial pressure Enam’s dose is gradually reduced.

Side effects
Very often (≥1/10)
– the obscured sight
– dizziness
– cough
– nausea
– an asthenia
Often (from ≥1/100 to & lt, 1/10):
– a headache, a depression
– hypotension (including orthostatic hypotension), a faint,
stethalgias, disturbances of a rhythm, stenocardia, tachycardia
– short wind
– diarrhea, an abdominal pain, change of taste
– rash, hypersensitivity / a Quincke’s disease of the face,
extremities, lips, language, a glottis and/or throat
– fatigue
– a hyperpotassemia, increase in creatinine in blood plasma
Infrequently (from ≥1/1.000 to & lt, 1/100)
– anemia (including. aplastic and hemolytic)
– a hypoglycemia
– confusion of consciousness, drowsiness, insomnia, nervousness, paresthesias,
dizziness
– heartbeat, a myocardial infarction or cerebral and vascular complications,
at patients with the increased risk
is a rhinorrhea, a sore throat, hoarseness, bronchospasm/asthma
– intestinal impassability, pancreatitis, vomiting, dyspepsia, a constipation,
anorexia, irritation of a stomach, dryness in a mouth, a round ulcer
– sweating, an itching, urticaria, an alopecia
– a renal failure, a renal failure, a proteinuria
– impotence
– spasms, rushes of blood, sonitus, a general malaise,
fever
– increase in urea in plasma, a hyponatremia
Seldom (from ≥1/10.000 to & lt, 1/1.000)
– a neutropenia, a hypohaemoglobinaemia, decrease in gematokritny number,
thrombocytopenia, an agranulocytosis, oppression of function of marrow,
a pancytopenia, a lymphadenopathy, autoimmune diseases
– insomnia, a sleep disorder
– Reynaud’s phenomenon
– infiltrates in lungs, rhinitis, an allergic alveolitis / eosinophilic
pneumonia
– stomatitis / aphthous ulcers, a glossitis
– a liver failure, hepatitis, including hepatocellular or
cholestatic hepatitis, including necrosis, a cholestasia, jaundice
– a multiformny erythema, Stephens-Johnson’s syndrome, exfoliative
dermatitis, a toxic epidermal necrolysis, a bladderwort, eritroder-
a miya
– an oliguria
– a gynecomastia
– increase in enzymes of a liver, increase in bilirubin in blood plasma
is Very rare (& lt, 1/10.000)
– intestinal angio-swelled
It is unknown (it cannot be estimated on the basis of the available data)
– the syndrome of inadequate secretion of antidiuretic hormone (SNADG)

Was noted a complex of symptoms: ​​ fever, serositis, vasculitis, myalgia/miositis, arthralgia/arthritis, positive test for antinuclear antibodies (ANA), acceleration SOE, eosinophilia and leukocytosis. Also there can be rash, a photosensitization and other dermatological manifestations.
At emergence of serious side effects, treatment should be stopped.

Special instructions
not to apply to the persons who are not transferring lactose.
With extra care apply at patients with autoimmune diseases, diabetes, abnormal liver functions, a severe form of a stenosis of an aorta, a subaortal muscular stenosis of not clear genesis, a hypertrophic cardiomyopathy, at loss of liquid and salts. In case of the previous treatment by saluretics, in particular at patients with chronic heart failure, risk of developing orthostatic hypotension therefore before an initiation of treatment enalapril it is necessary to offset loss of liquid and salts increases.
At long-term treatment by enalapril it is necessary to control a pattern of peripheral blood periodically. The sudden termination of intake of enalapril does not cause sharp increase in the ABP.
At surgical interventions during treatment by enalapril development of arterial hypotension which should be korrigirovat introduction of enough liquid is possible.
Before a research of function of epithelial bodies enalapril should be cancelled.
Safety and efficiency of use of enalapril for children are not established.

The care at control of vehicles or performance of other work requiring special attention since dizziness, especially after reception of an initial dose of enalapril

Overdose
Symptoms is possible Is necessary for feature of influence of medicine on ability to run the vehicle or potentially dangerous mechanisms: excessive hypotension, development of a myocardial infarction, an acute disorder of cerebral circulation and tromboembolic episodes against the background of sharp decrease in the ABP.
Treatment: intravenous administration of isotonic solution of sodium of chloride and at an opportunity – angiotensin II infusion, is possible removal of enalaprilat by means of a hemodialysis.

To Store storage conditions in the dry, protected from light place at a temperature not above 25 °C. To store in the places inaccessible for children!

2 years
After an expiration date not to apply a period of storage.

the Name and the country of the owner of the registration certificate
the Dr. of Reddi’s Laboratoris Limited, India