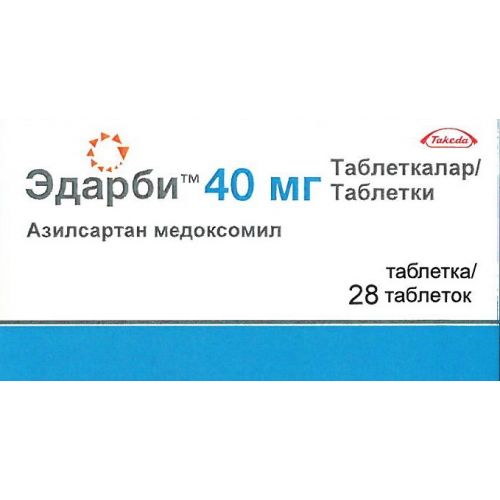 of the Tablet of a flat form from white till almost white color with the squeezed-out inscription ASL on one party and the squeezed-out figure 40 on other party. Diameter of a tablet is about 7.6 mm, thickness is about 4.2 mm.

of the Tablet of a flat form from white till almost white color with the squeezed-out inscription ASL on one party and the squeezed-out figure 80 on other party. Diameter of a tablet is about 9.6 mm, thickness is about 5.3 mm.

azilsartan medoksomit the Pharmacological Pharmacokinetics Later properties of oral administration quickly is hydrolyzed to an active azilsartan in digestive tract and/or during absorption. The researches in vitro showed that the karboksimetilenbutenolidaza participates in hydrolysis in intestines and a liver. Besides, esterases of plasma participate in hydrolysis azilsartan a medoksomila in azilsartan.

14C-marked azilsartan medoksomit removal After intake of a dose, about 55% of radioactivity are shown to Calais and about 42% in urine, 15% of this dose are excreted with urine in the form of an azilsartan. Elimination half-life of an azilsartan makes about 11 hours, the renal clearance is about 2.3 ml/min. Constant concentration of an azilsartan is reached within 5 days and at repeated receptions once a day cumulation in plasma does not happen.

Proportionality of a dose in exposure is established for an azilsartan in a dose azilsartan a medoksomila from 20 mg to 320 mg after single or multiple dose.

Pharmacokinetics of an azilsartan at young people (age of 18-45 years) and elderly (age of 65-85 years) patients significantly do not differ.

Paul Pharmakokinetika of an azilsartan at men and women significantly does not differ.

Azilsartan medoksomit is oral active pro-medicine which quickly turns into an active azilsartan, being the selection antagonist of angiotensin II, by blocking of its linking with receptors of the angiotensin of type 1 (AT1) in various fabrics. Angiotensin II is the main pressor substance system renin-angiotenzinovoy with the effects including vasoconstriction, stimulation of synthesis and release of Aldosteronum, stimulation of warm activity and a renal reabsorption of sodium.

Blockade of AT1 of receptors leads to oppression of negative return impact of angiotensin II on renin secretion, but the subsequent increase in activity of the circulating levels of renin of plasma and angiotensin II does not weaken clinical antihypertensive effect of an azilsartan.

At use of Edarbi in treatment of arterial hypertension typical dynamics of the arterial blood pressure (ABP) is as follows:

The hypotensive effect of Edarbi is maintained for 24 hours after reception.

Ricochet hypertensia after cancellation of therapy of Edarbi is not observed.

At reception of Edarbi in a dose up to 320 mg a day of any signs of lengthening of intervals of QT/QTc was not.

of the Tablet should be accepted inside regardless of meal.

The recommended initial dose makes 40 mg once a day. The dose can be increased to the maximum dose of 80 mg once a day at patients whose ABP at lower doses properly is not controlled.
The clinical antihypertensive effect is shown on the 2nd week, and the maximum effect is reached by 4th week of reception.

If the ABP properly is not controlled by means of monotherapy of Edarbi, then additional decrease in the ABP can be reached at co-administration of Edarbi with other antihypertensive drugs, including diuretics (such as Chlortalidonum and hydrochlorothiazide) and blockers of calcium channels (such as amlodipin).

elderly patients have no need in special selection of a dose of Edarbi, however for patients 75 years with risk of developing of arterial hypotension are more senior it is necessary to consider the possibility of use of drug in a dose of 20 mg as an initial dose.

It is necessary to be careful at patients with a renal failure of heavy degree and an end-stage of a disease of kidneys as such patients have no experience of use of Edarbi.

The hemodialysis does not delete azilsartan from blood circulation.

Dose adjustment with renal failures easy and moderate severity is not required from patients.

At patients with a heavy liver failure of a research on use of Edarbi was not carried out therefore drug is not recommended to be used in this group of patients.

As experience of use of Edarbi at patients with abnormal liver functions of easy and average degree is limited, careful observation of such patients is recommended.

At patients with possible deficit of intravascular volume or salt exhaustion (for example, patients with vomiting, diarrhea or the accepting high doses of diuretics), reception of Edarbi it is necessary to begin under careful medical observation, it is also necessary to consider the possibility of use of Edarbi in an initial dose of 20 mg.

It is necessary to be careful at hypertensive patients with stagnant heart failure as such patients have no experience of use of Edarbi.

At reception of Edarbi side effects can be lungs or moderate severity.

Gender and age do not influence the frequency of manifestation of side effects.

Frequency of side effects of drug is regarded as follows:

– increase in a kreatinfosfokinaza of blood

– increase in level of creatinine of blood

– increase in concentration of uric acid in a blood / hyperuricemia

the Description of separate side reactions

At simultaneous use of Edarbi with Chlortalidonum the frequency of increase in level of creatinine of blood and hypotension increased from infrequent to frequent.

At simultaneous use of Edarbi with amlodipiny the frequency of peripheral hypostases increased, but was lower, than at use of an amlodipin in monotherapy.

During the researches with Edarbi the small increase in concentration of uric acid in blood serum (10.8 µmol/l) in comparison with placebo (4.3 µmol/l) was also observed.

During placebo – controlled researches with Edarbi the small decrease in hemoglobin and a hematocrit was noted (on 3 g/l and 1 percent by volume respectively). This effect was also observed at use of other inhibitors the system renin-angiotensin-aldosteronovoy (SRAA).

– hypersensitivity to active agent or to any of excipients

– combined use of Edarbi with aliskireny at patients with diabetes or renal failures (the glomerular filtration rate (GFR) & lt, 60 ml/min. / 1.73 sq.m)

is not recommended simultaneous use

At simultaneous use of lithium and APF inhibitors the reversible increase in concentration of lithium in blood serum and reversible increase in expressiveness of manifestations of toxicity is registered. The similar effect can arise also with antagonists of receptors of angiotensin II. Due to the lack of experience of simultaneous use azilsartan medoksomit also a lity, this combination is not recommended. If this combination was necessary, then careful monitoring of level of serumal lithium is recommended.

The care at simultaneous use is required

Azilsartan medoksomit quickly is hydrolyzed to an active azilsartan by esterases in digestive tract and/or at drug absorption. The researches in vitro showed that interactions on the basis of inhibition of esterases are improbable.

At patients, a vascular tone and which function of kidneys depend mainly on activity of RAAS (for example, at patients with stagnant heart failure, heavy renal failures or a renal artery stenosis), treatment by APF inhibitors and antagonists of angiotensin II it was connected with acute arterial hypotension, an azotemia, an oliguria or, it is rare with an acute renal failure. Probability of similar effects cannot be excluded at Edarbi.

It is necessary to be careful at patients with heavy renal failures, stagnant heart failure or a renal artery stenosis as these patients have no experience of use of Edarbi.

Excessive decrease in the ABP at patients with an ischemic cardiomyopathy or an ischemic cerebrovascular disease can lead to a myocardial infarction or a stroke.

Double blockade of RAAS blockers of receptors of angiotensin, APF inhibitors, or aliskireny is connected with increase in risk of developing of arterial hypotension, a hyperpotassemia and change of function of kidneys (including, an acute renal failure) in comparison with monotherapy. It is necessary to control attentively the ABP, function of kidneys and level of electrolytes at the patients accepting Edarbi and other medicines influencing RAAS.

Now the patients who recently transferred transplantation of kidneys have no experience of use of Edarbi.

At patients with a heavy liver failure of Edarbi it was not studied and therefore it is not recommended to use it in this group of patients.

Hypotension at patients with water or salt exhaustion

At patients with the significant decrease in volume of the circulating blood and/or salt exhaustion (for example, at patients with vomiting, diarrhea or the diuretics accepting high doses) after an initiation of treatment of Edarbi can arise symptomatic arterial hypotension. The hypovolemia should be modified before reception of Edarbi, or treatment should be begun under careful medical observation. Also it is necessary to consider the possibility of purpose of an initial dose of 20 mg.

Patients with primary hyper aldosteronism usually do not react to the antihypertensive drugs operating by inhibition system renin-angiotenzinovoy. Thus, use of Edarbi at these patients is not recommended.

on the basis of experience of use of other medicines influencing renin-angiotensin-aldosteronovuyu a system, simultaneous use of Edarbi with kaliysberegayushchy diuretics, kaliysoderzhashchy additives, the salt substitutes containing potassium or other medicines which are capable to increase potassium level (for example heparin) can lead to increase in potassium in blood of patients with AG.

The stenosis of aortal and mitral valves, a subaortic hypertrophic stenosis

Are recommended special precautionary measures at patients with a stenosis of aortal or mitral valves and also with a hypertrophic subaortic stenosis (GOKM).

Data on use of Edarbi for pregnant women are absent. Researches on animals revealed reproductive toxicity. At approach or planning of pregnancy it is necessary to stop immediately use of drug and, if necessary, to pass to alternative therapy.

As there is no information on use of Edarbi during breastfeeding, use of Edarbi is not recommended, and alternative methods of treatment with the best proved characteristics of safety are more preferable during feeding by a breast, especially during feeding of the newborn or premature child.

It is expected features of influence of medicine on ability to run the vehicle or potentially dangerous mechanisms on the basis of pharmakodinamichesky properties that azilsartan medoksomit has insignificant influence on ability to drive the car and work with mechanisms. Nevertheless, at intake of any
antihypertensive drugs it is necessary to consider that there can sometimes come dizziness or feeling of fatigue.

At the patients accepting 320 mg of Edarbi a day within 7 days, signs of overdose were not noted.

Treatment: if there was arterial hypotension, then it is necessary to begin symptomatic therapy and to carry out monitoring of the vital functions. The hemodialysis is not effective.

not to use drug after expiry date

Takeda of Pharm of A/S, Denmark

To develop the e-mail address of DSO-KZ@takeda.com