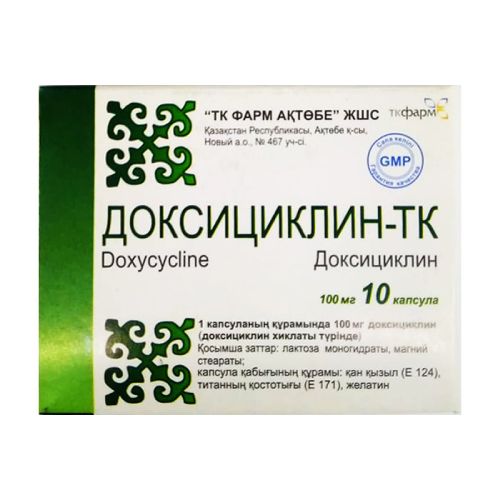 Doxycycline is rapidly absorbed from the gastrointestinal tract in proportion to the dose taken. The absorption process can be slowed down by food contents, especially dairy products and preparations containing metal ions. After ingestion of 200 mg of the drug, the maximum plasma concentration of 2.6 μg / ml of doxycycline reaches 2 hours later.

The biological half-life of the drug is from 18 to 22 hours and is extended to approximately 25 hours in patients with renal insufficiency. Due to the long half-life, the drug can be taken once a day.

Doxycycline is highly soluble in fats. Easily penetrates into most biological fluids and tissues of the body. The drug reaches high concentrations in the aqueous humor of the eye, in the prostate gland, ovaries, uterus, bladder, bile, liver, muscles, rudiments of teeth and bones, in the discharge of the bronchial tree, lungs, lymph nodes, paranasal sinuses, palatine tonsils. Passes through the placenta. Penetrates into mother’s milk.

Hemodialysis does not affect the biological half-life of the drug from serum.

Doxycycline-TK is an antibiotic belonging to the group of tetracyclines. It has a wide spectrum of action against gram-negative and gram-positive bacteria, as well as protozoa. The bacteriostatic mechanism of action of the drug is to inhibit protein synthesis at the ribosomal level.

Doxycycline in vitro has antibacterial action against:

Rickettsia , Chlamydia psittaci , Chlamydia trachomatis , Mycoplasma pneumoniae , Ureaplasma urealyticum , Borrelia recurrentis , Treponema pallidum , Clostridium spp ., Fusobacterium fusiforme , Actinomyces spp . , Bacillus anthracis , Propinibacterium acnes , Entamoeba . coliant coli . Plasmodium falciparum . Doxycycline resistance has been observed among many strains, especially Gram-positive bacteria. This phenomenon is characterized by heterogeneity, because there are often large differences in bacterial resistance in different regions of the world. The mechanism of resistance to doxycycline is associated with a decrease in the ability of the drug to penetrate into the bacterial cell. This resistance is due to the presence of transferable R-plasmids in the cell.

Doxycycline is used to treat various infections caused by susceptible strains of gram-positive and gram-negative bacteria and some other microorganisms.

Doxycycline is an alternative drug in the treatment of gonorrhea and syphilis.

– malaria caused by Plasmodium falciparum during short-term travel (less than 4 months) in areas where strains resistant to chloroquine and / or pyrimethamine-sulfadoxine are common.

Use strictly as prescribed by the doctor to avoid complications. Doxycycline is prescribed only if there is an absolute indication.

Capsules should be taken with plenty of liquid. It is recommended to take the drug while lying down or standing before going to bed at night to reduce the likelihood of esophageal irritation and ulceration.

If stomach irritation occurs, it is recommended that Doxycycline be taken with food or with milk. Studies have shown that food or milk intake does not significantly affect the absorption of doxycycline.

Adults: On the first day of treatment, doxycycline is usually prescribed 200 mg in 1 dose or divided into 2 doses – 100 mg every 12 hours, and then switched to a maintenance dose of 100 mg per day.

In severe infections during the entire period of treatment, doxycycline 200 mg per day is prescribed.

Exceeding the recommended dose may increase the frequency of side effects.

The following adverse reactions have been observed in patients receiving tetracyclines, including doxycycline:

Superinfection: As with other antibiotics, overgrowth of nonsusceptible organisms can lead to candidiasis, glossitis, staphylococcal enterocolitis, pseudomembranous colitis (may cause Clostridia overgrowth ), and inflammatory lesions (urogenital candidiasis) of the genitourinary system.

From the blood and lymphatic system

From the side of the immune system

With prolonged use of tetracyclines, a brown-black staining of the thyroid tissue was observed, which was detected by microscopic examination. Thyroid dysfunction was not found.

From the side of the nervous system

On the part of the hearing and vestibular apparatus : tinnitus.

From the digestive tract

Gastrointestinal symptoms are usually mild and rarely require discontinuation of treatment. These include: abdominal pain, stomatitis, anorexia, nausea, vomiting, diarrhea, dyspepsia, and rarely dysphagia. Esophagitis and esophageal ulceration have been reported. Tetracyclines can cause discoloration of teeth or hypoplasia of tooth enamel, which is usually observed with long-term use of the drug.

From the digestive system : a transient increase in the level of hepatic transaminases, impaired liver function, hepatitis, jaundice and pancreatitis. Isolated cases of hepatotoxicity, liver failure were observed.

From the bones and joints: arthralgia, myalgia.

Violation of the function of the kidneys and urinary tract: increased levels of residual urea nitrogen.

– hypersensitivity to doxycycline, other tetracyclines or to any substance that is part of the drug

There is an increased risk of ergotism when doxycycline is co-administered with ergotamine and methysergide.

Doxycycline increases the risk of methotrexate toxicity. It should be used with caution in patients treated with methotrexate.

Kaolin and sucralfate may reduce the absorption of doxycycline.

Quinapril contains magnesium carbonate and may reduce the absorption of doxycycline.

It is desirable to avoid the simultaneous use of doxycycline in combination with penicillin due to a decrease in the absorption of doxycycline.

The use of doxycycline and warfarin causes prolongation of prothrombin time. Tetracyclines inhibit plasma prothrombin activity, and therefore the dose of concomitant anticoagulants should be reduced.

The simultaneous use of barbiturates, carbamazepine, phenytoin or primidone causes a reduction in the half-life of doxycycline. In such cases, consideration should be given to increasing the daily dose of doxycycline.

Alcohol may decrease the half-life of doxycycline.

Doxycycline may increase the plasma concentration of ciclosporin . Joint administration of these drugs should be carried out only under the supervision of a physician.

Hepatic enzyme-inducing drugs, such as rifampicin , may accelerate the elimination of doxycycline, thereby reducing its half-life, which may result in subtherapeutic blood concentrations of doxycycline. In such cases, medical supervision is recommended and, if necessary, consider increasing the dose of doxycycline.

The simultaneous use of doxycycline with retinoids should be avoided due to an increased risk of developing benign intracranial hypertension.

The simultaneous use of tetracyclines and methoxyflurane increases the risk of nephrotoxicity with a possible fatal outcome.

Oral typhoid vaccination should be avoided during doxycycline treatment due to antibiotic inactivation.

When conducting a fluorescent test, a false increase in the level of catecholamines in the urine can be observed.

Doxycycline should be used with caution in patients with hepatic insufficiency, as well as in those receiving potentially hepatotoxic drugs.

Liver dysfunction associated with oral or parenteral administration of tetracyclines, including doxycycline, has been observed rarely.

Studies have not revealed a significant difference in the half-life of doxycycline from serum in individuals with preserved and impaired renal function. Hemodialysis does not affect the half-life of the drug from the blood serum.

The anti-anabolic effect of tetracyclines can lead to an increase in the level of urea in the blood. The antianabolic effect was absent when doxycycline was used in patients with impaired renal function.

To prevent the development of candidiasis, it is recommended to use antifungal drugs simultaneously with Doxycycline.

There have been reports of the development of pseudomembranous colitis with the use of almost all antibacterial substances, including doxycycline. The severity of complications ranged from mild to life-threatening. A decision should be made regarding discontinuation of doxycycline therapy, and, if necessary, appropriate treatment (administration of specific antibiotics and chemotherapeutic agents).

Cases of esophagitis and esophageal ulcers have been reported in patients using encapsulated or tablet forms of the tetracycline class of drugs, including doxycycline. Most of these patients took the drug just before bedtime or with insufficient fluids.

Mild intracranial hypertension has been reported in individuals receiving the drug at the maximum therapeutic dose. It quickly disappeared after discontinuation of the drug.

Rare cases of porphyria have been observed in patients taking tetracycline.

Appropriate diagnostic procedures, including dark-field microscopy and other tests, should be used in the treatment of sexually transmitted diseases with suspected concomitant syphilis. In such cases, monthly serological tests should be performed for at least four months.

The course of treatment in patients with infections caused by group A beta-hemolytic streptococci should be at least 10 days.

Drugs of the tetracycline group can cause neuromuscular blockade, so care must be taken when using doxycycline in patients with myasthenia gravis.

Caution should be exercised while using methoxyflurane with tetracyclines due to increased nephrotoxicity.

The ability to influence the reaction rate when driving vehicles and working with mechanisms.

Until the patient’s individual response to the drug is clarified, one should refrain from driving vehicles or other mechanisms, given that during treatment with doxycycline, loss of vision, blurred vision, dizziness may occur.

Symptoms of an overdose of doxycycline are fever, facial flushing, dizziness, and sometimes collapse may develop.

The use of hemodialysis to eliminate the drug from the blood is ineffective.

In a dry, dark place, at a temperature not exceeding 25°C.

Be the first to review “Doxycycline-TK 100 mg, 10 capsules” Cancel reply