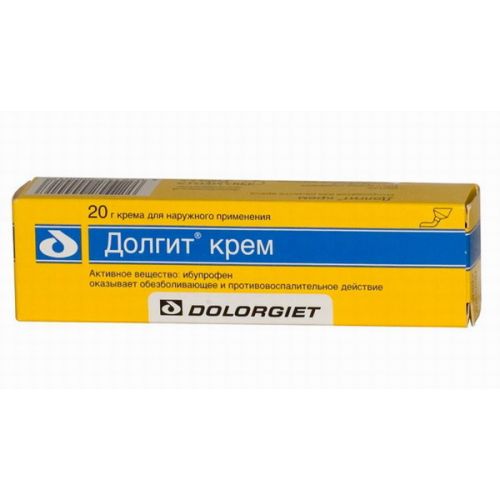 of the drug Dolgit cream

Cream of uniform, soft consistence of whitish and cream color with a smell of lavender and nerolovy oils.

Pharmacokinetics At properties drawing on skin an ibuprofen some time remains in the form of depot and from there is slowly allocated and acquired. Chrezkozhno is acquired by about 5% of an ibuprofen that is confirmed by the conducted comparative researches. The observed therapeutic effectiveness is explained by concentration of an ibuprofen in the corresponding fabrics under a zone of putting cream. Penetration of cream into an area of coverage can change depending on exposure and also a zone of drawing and an area of coverage.

Drug renders local anesthetic, anti-inflammatory and antiedematous action. A key link in the mechanism of specific action of an ibuprofen is slowing down of biosynthesis of prostaglandins. Causes decrease or disappearance of a pain syndrome, including pains at rest and at the movement, reduces morning constraint and a swelling of joints. Promotes increase in volume of movements.

– the pseudorheumatism, psoriasis arthritis, a humeroscapular periarthritis ankylosing the spondylitis deforming an osteoarthrosis, osteochondrosis with a radicular syndrome, sciatica, a tendinitis, a tendovaginitis, a bursitis, a lumbago, a sciatica)

– muscular pains (myalgias) of rheumatic and not rheumatic origin

Cream is applied to skin in the field of the painful site by 3-2 times a day and rub easy movements before full absorption of drug. The strip of cream 5-10 cm long is used.

Duration of treatment is determined by the doctor.

In rheumatic diseases duration of therapy depends on severity of a disease and the nature of damage.

– in rare instances perhaps temporary emergence of signs of local irritation of integuments in the form of reddening, hypostasis, rashes or an itching of skin

– in case of hypersensitivity to non-steroidal anti-inflammatory drugs are possible the bronchospasm phenomena.

At emergence of the specified side effects or other unusual reactions the drug treatment should be stopped, the possibility of further use of drug is defined by the doctor.

– hypersensitivity to an ibuprofen and other components of drug

– pregnancy and a lactation

instructions Drug it is impossible to apply on an open wound surface, the injured skin, it is necessary to avoid hit of cream in eyes and other mucous membranes. It is not necessary to use drug at children up to 14 years without consultation of the doctor.

the Overdose does not influence

overdose Cases are not described by cream.

On 20 g, 50 g or 100 g of drug place in tubas aluminum, with internal varnish coating and with the screwing-up plastic cap.

to Store at a temperature not higher than 25 wasps.

not to use a period of storage after the termination of an expiration date.

the producer/packer/owner of the registration certificate

of Dolorgit GmbH and To. KG, Germany

the Address of the organization accepting in the territory of the Republic of Kazakhstan claims from consumers on quality of goods
of PROM.MEDIC.KAZ LLP.
Almaty, Dostyk Ave. 132, office 9, ph. 8 (727) 260-89-36
Email: sekretar@prommedic.kz