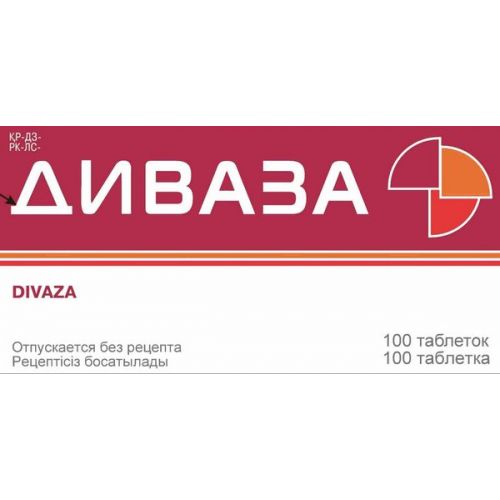 The instruction for medical use of DIVAZA medicine the Trade name of the drug Divaza Mezhdunarodnoye the unlicensed name Is not present the Dosage form of the Tablet dispersed Structure One tablet contains active agents in an oral cavity: Antibodies to mozgospetsifichesky protein S-100 affinely cleaned – 0.006 g *, Antibodies to endothelial NO to synthase affinely cleaned – 0.006 g * excipients: lactoses monohydrate, cellulose microcrystalline, magnesium stearate. * are applied on lactoses monohydrate in the form of mix of three active aqueous-alcoholic cultivations of the substance divorced respectively in 10012, 10030, 100200 times. The description of the Tablet of a ploskotsilindrichesky form, with risky and a facet, from white till almost white color. On the flat party from risky the inscription MATERIA MEDICA is put, on other flat party the inscription DIVAZA is put. The pharmacotherapeutic group Anxiolytics others the ATX N05BX Code the Pharmacological Pharmacokinetics Sensitivity properties of modern physical and chemical methods of the analysis (gas-liquid chromatography, highly effective liquid chromatography, chromaTO-mass spectrometry) does not allow to estimate the maintenance of midget doses of antibodies in biological liquids, bodies and fabrics that makes technically impossible studying pharmacokinetics of the drug Divaza. A pharmacodynamics the Combined homeopathic medicine: Antibodies to mozgospetsifichesky protein S-100 render antioxidant, antigipoksantny, neurotyre-tread, anxiolytic action. Modify functional activity of protein S-100 which is carrying out interface of information and metabolic processes in a brain. Possess membranotropny action, causing decrease in amplitude and suppression of generation of action potential, modulate synoptic plasticity in limbic structures of a brain, a hippocampus, a reticular formation, promote strengthening of brake influences of GAMK in central nervous system. Show properties of agonist sigma of 1 receptor of in vitro. Inhibit processes of peroxide oxidation of lipids. Have the normalizing impact on integrative activity of a brain that is shown by a wide range of the balanced psychopharmacological effects: antidepressive, anxiolytic, neurotyre-tread, anti-asthenic, anti-amnestic. Antibodies to endothelial NO to synthase increase activity of enzyme endothelial NO of synthase, restore development by an endothelium of nitrogen oxide (NO), eliminate endothelium dysfunction, have endotelioprotektorny effect, influence NO – a dependent vazodilatation. The stimulating Divaza’s influence on reparative processes in the center of ischemic injury of a brain is experimentally shown. Sharing of components of drug is followed by strengthening of neurotyre-tread activity of antibodies to protein S-100, strengthening of the vegeto-stabilizing effect, normalization of the vegetative status, synergy influence of both components on neuronalny plasticity, and thereof, increase in resistance of a brain to toxic influences, improves integrative activity and reestablishes mezhpolusharny communication of a brain, promotes elimination of cognitive disturbances, stimulates reparative processes and accelerates restoration of the central nervous system functions, increases intellectual working capacity, restores processes of training and memory, normalizes somatovegetative manifestations, increases a brain blood stream. The divase, as well as components making it, does not possess sedative and miorelaksantny action, does not cause addiction and accustoming. Indications – drug is used for restoration of integrative activity of a brain at a wide range of the organic lesions of central nervous system including caused by neurodegenerative, cerebrovascular diseases, neuroinfections, a craniocereberal injury – as a part of complex therapy. – as a part of complex therapy of ischemic brain damages in the acute and remote period. – monotherapy of somatoformny dysfunction of the autonomic nervous system. Route of administration and doses Inside. On one reception – 1 tablet (to hold in a mouth before full dissolution). To apply on 1-2 tablet 3 times a day out of meal. Depending on weight of a state, during an acute period the frequency of reception can be increased up to 4-6 times a day. In the profound organic lesions of central nervous system duration of course therapy can reach 4-6 months. Side effects Are possible reactions of the increased individual sensitivity to drug components. The contraindication – the increased individual sensitivity to drug components – children’s and teenage age up to 18 years Medicinal interactions of Cases of incompatibility with other medicines is not revealed so far. Special instructions monohydrate in this connection patients are not recommended to appoint it with a congenital galactosemia, a sprue of glucose or a galactose, or in a congenital lactose intolerance is a part of drug lactoses. Pregnancy and the period of a lactation Safety of use of Divaza for pregnant women and in the period of a lactation was not studied. In need of administration of drug it is necessary to consider a ratio risk/advantage. The feature of influence on ability to run the vehicle or other potentially dangerous Divaza mechanisms does not influence ability of control of vehicles and other potentially dangerous mechanisms. Overdose of Cases of overdose it is not registered so far. At accidental overdose the dispepsichesky phenomena are possible. Treatment: symptomatic. A form of release and packing On 20 tablets dispersed in an oral cavity in blister strip packaging from a film of polyvinylchloride and aluminum foil. On 5 blister strip packagings together with the instruction for medical use in the state and Russian languages place in a pack from cardboard. Storage conditions In the place protected from light, at a temperature not above 25 °C. To store out of children’s reach. 3 years not to apply a period of storage after an expiration date. Prescription status Without prescription the Producer/packer of LLC NPF MATERIA MEDIKA HOLDING, Russia, 127473, Moscow, 3rd Samotechny Lane, 9. Ph./fax: (495) 684-43-33. Holder of the registration certificate of LLC NPF MATERIA MEDIKA HOLDING, Russia. Production site of LLC NPF MATERIA MEDIKA HOLDING, Russia, 454139, Chelyabinsk, Buguruslanskaya St., 54. The address of the organization accepting in the territory of the Republic of Kazakhstan claims from consumers on quality of medicines Representative office of LLC NPF MATERIA MEDIKA HOLDING in RK Almaty, Seyfullin St. 498, office 507. Ph./fax: 2734713 E-mail: kz@dep.materiamedica.ru the Name, the address and a contact information of the organization responsible for post-registration observation in the territory of RK: Representative office of LLC NPF MATERIA MEDIKA HOLDING in RK Almaty, Seyfullin St. 498, office 507.