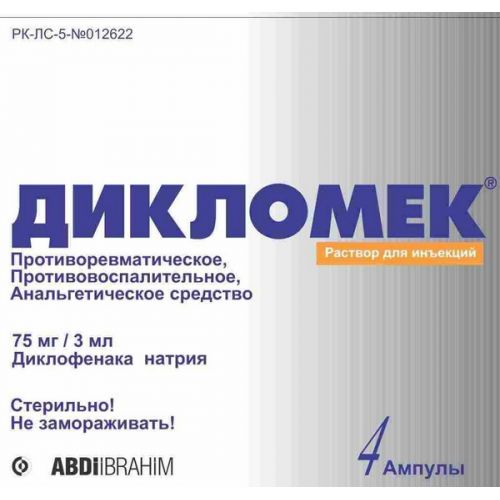 the Trade name
of Diklomek®

Pharmacokinetics Time properties of achievement of the maximum concentration in oil of introduction of 20 min. Concentration of active agent in plasma is in linear dependence on size of the applied dose. Does not kumulirut. Linking with proteins of plasma makes 99.7%. (mainly with albumine). Plasma elimination half-life makes 1-2 hours, of synovial fluid – 3-6 hours. About 60% are removed in the form of metabolites by kidneys, less than 1%

are extracted with urine in an invariable look, the rest is removed in the form of metabolites with bile.
Pharmacodynamics
Non-steroidal anti-inflammatory drug, derivative phenylacetic acid. Renders the significant anti-inflammatory, analgeziruyushchy and moderate febrifugal action. The mechanism of action is connected with oppression of activity of COG-of the main enzyme of metabolism of arachidonic acid, being the predecessor of prostaglandins which play a major role in pathogenesis of inflammation, pain and fever. Analgeziruyushchy action is caused by two mechanisms: peripheral (indirectly, through suppression of synthesis of prostaglandins) and central (at the expense of inhibition of synthesis of prostaglandins in the central and peripheral nervous system).
Inhibits synthesis of proteoglycan in cartilages. In rheumatic diseases reduces joint pains at rest and at the movement and also morning constraint and a swelling of joints, promotes increase in volume of movements. Reduces posttraumatic and postoperative pains and also inflammatory hypostasis. Suppresses aggregation of thrombocytes. At prolonged use has the desensibilizing effect.

the Route of administration and doses
appoint Drug in oil (deeply in a gluteus) in a dose of 75 mg (3 ml)
of 1 times a day. It is not necessary to apply Diklomek’s injections more than 2 days.
The maximum single dose of 75 mg (3 ml)
the Maximum daily dose of 150 mg (6 ml)

of the Contraindication
– hypersensitivity to drug
– digestive tract erosive cankers (in
an aggravation phase), bleedings from digestive tract
– liver abscess, cirrhosis, hepatitis, a liver failure
– a renal failure (clearance of creatinine less than 30 ml/min.)
– the hyperpotassemia
– rinosinusit
– urticaria, the bronchial asthma arising at intake of acetylsalicylic
acid or other NPVP (including an aspirinovy triad)
– disturbances of a hemopoiesis, disturbance of a hemostasis (including hemophilia)
– children’s and teenage age up to 18 years
– pregnancy and the period of a lactation

Medicinal interactions
Simultaneous system use of NPVP can increase the frequency of emergence of the undesirable phenomena. At use of drug and antidiabetic means, the efficiency of the last does not change. However, separate messages about development of such cases as to a hypoglycemia and a hyperglycemia are known that caused need of change of a dose of sacchariferous drugs during Diklomek’s use.
Influence of NPVP synthesis of prostaglandins in kidneys can increase nephrotoxicity of cyclosporine. There are separate messages about development of spasms in patients of the receiving at the same time derivative hinolon and NPVP.
At combined use the level of serum of digoxin and a methotrexate can increase, nephrotoxicity of cyclosporine can increase. Diklomek can increase the level of lithium or digoxin in blood plasma, by decrease in renal clearance of lithium.
The dosage of drug has to be selected for patients who apply insulin or hypoglycemic means even if there are no special reasons for such adjustment.
Diklomek can suppress activity of diuretics. At treatment by kaliysberegayushchy diuretics diclofenac can increase potassium level in blood serum (it is necessary to control potassium level). The Diklomeka solution which is contained in ampoules should not be mixed with solutions of other medicines for injections.
Side effects can amplify at a diclofenac combination to kortikoidny drugs or other NPVS. Perhaps temporary aggregation of thrombocytes, at use of a high dose of diclofenac (200 mg and above).
As well as other NPVS, at combined use of a methotrexate, diklomek should be taken with caution within 24 hours before reception of a methotrexate.

Special instructions
during treatment by Diklomek at patients with gastrointestinal diseases can arise gastrointestinal bleedings or develop a digestive tract ulcer.
Development of reactions of hypersensitivity to sodium metabisulphite, the injection solution which is a part is possible.
During use of drug the careful medical observation of those patients who have complaints indicating diseases of digestive tract or the available anamnestic data on a canker of a stomach or intestines is necessary.
The care is necessary when prescribing drug for patients with a hepatic porphyria as drug can provoke porphyria attacks.
Diklomek, as well as other NPVP, can temporarily inhibit aggregation of thrombocytes. Therefore at patients with disturbances of a hemostasis the careful control of the corresponding laboratory indicators is necessary.
The extra care should be observed at intramuscular introduction of Diklomek by the patient with bronchial asthma (because of risk of strengthening of expressiveness of symptoms of a disease), and also to patients with allergic rhinitis (including seasonal) and polyps mucous a nose.
At patients earlier receiving Diklomek can develop in rare instances allergic reactions, including anaphylactic and anaphylactoid reactions.
The patients taking the drug need to abstain from alcohol intake.
Features of influence of medicine on ability to run motor transport or potentially dangerous mechanisms
during treatment reduction in the rate of psychomotor reactions is possible.
In these cases it is not necessary to drive the car and to be engaged in other potentially dangerous types of activity.

the Form of release and packing
On 3 ml of drug place in ampoules of colourless glass.
On 4 or 5 ampoules place in plastic strip packaging.
On 1 or 2 packs together with the instruction for medical use
in the state and Russian languages place in cardboard packs.

To Store storage conditions in the dry, protected from light place, at a temperature not above +25C.
Not to freeze!
To store out of children’s reach!