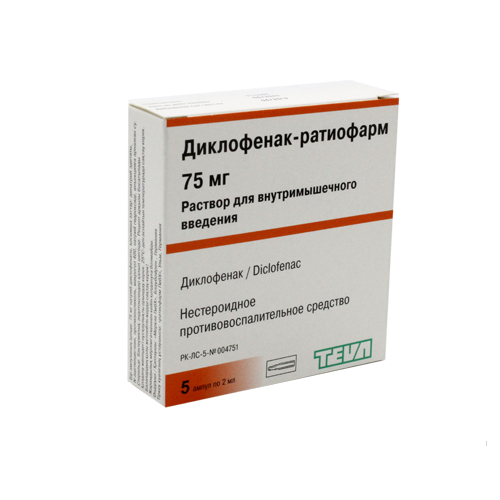 of Diklofenak-ratiopharm of an ampoule of 75 mg / 2 ml

The code of automatic telephone exchange of M 01AB 05

Pharmacokinetics Later properties of an intramuscular injection of 75 mg of diclofenac the maximum concentration of plasma are reached on average after 10-20 minutes. Communication with proteins (generally with albumine) makes blood 99.7%. An overwhelming part is metabolized in a liver. Plasma elimination half-life makes 1-2 hours, elimination half-life of synovial fluid of 3-6 hours. About 60% of active agent are allocated in the form of partially activated metabolites and less than 1% in not changed look through kidneys, the rest is allocated in a metabolizirovanny look through bile and excrements. The resorption, metabolism and discharge of drug are regardless of age. At bounded function of kidneys or in abnormal liver functions it is impossible to expect cumulation if the recommended intervals of a dosage are observed.

of Diklofenak-ratiopharm of an ampoule of 75 mg / 2 ml renders expressed the anti-inflammatory, anesthetizing and moderate febrifugal action. The mechanism of its action is caused by suppression of activity of enzyme of cyclooxygenase therefore reactions of an arachidonic cascade are blocked and synthesis of E2 and F2 prostaglandins, A2 thromboxane, prostacyclin, leukotrienes and emission of lizosomalny enzymes which play a major role in pathogenesis of inflammation, pain and fever is broken. Diklofenak-ratiopharm ampoules of 75 mg / 2 the ml suppresses aggregation of thrombocytes. In rheumatic diseases reduces a joint pain at rest and at the movement, morning constraint, a swelling of joints, improves their functional capacity. At the inflammatory processes arising after operations and injuries quickly facilitates both spontaneous pain, and an oxycinesia, reduces inflammatory hypostasis on the place of a wound.

– a bad attack of gout

of Diklofenak-ratiopharm of an ampoule of 75 mg / 2 ml are applied in the form of a deep intramuscular injection (in upper external quadrants of a buttock).

1 ampoule (75 mg sodium diclofenac) in day is appointed. In hard cases (as, for example, in gripes) it is possible to enter 2 ampoules a day at an interval of several hours, and it is recommended to change the place of an injection.

It is recommended to limit parenteral reception up to 2 days. Duration of a course of intramuscular administration of diclofenac is defined by the attending physician. If further therapy is required, it has to be carried out using tablets or rectal candles. For individual selection of a dose it is possible to combine one ampoule (75 mg) with other dosage forms of diclofenac of sodium to the maximum daily dose in 150 mg.

Instructions on use: Nadpilivaniya of an ampoule is not required. The address with ORS (one-point-cut): to turn an ampoule a color point upward! To stir up the solution which is in an ampoule neck that it flew down down. To crack a neck of an ampoule down.

– disturbances of taste, a visual disturbance (doubling in eyes or illegibility of perception), sonitus with a hearing disorder

– nausea, vomiting, a diarrhea, including, with blood impurity which in exceptional cases can lead to anemia

– lack of appetite spasms in a stomach, feeling of overflow

– gastrointestinal tract diseases which can be followed by ulcerations mucous that in rare instances leads to emergence of blood in a chair or a hematemesis or to a diarrhea, the followed severe pains in epigastriums

– increase in level of transaminases in serum

– the renal failure, a proteinuria, a hamaturia or damage of kidneys (interstitial nephrite, a nephrotic syndrome, necrosis of nipples)

– stomatitis, inflammations of language, an ulcer of a gullet, the complaint to pains in the bottom of a stomach (the nonspecific bleeding inflammations of a large intestine, exacerbation of Crohn’s disease or ulcer colitis), constipations, inflammation of a pancreas (pancreatitis)

– reduction of volume of the emitted urine, hypostases, the general feeling of weakness, symptoms of a renal failure

– urticaria, a hair loss, hypersensitivity to light, eczemas, an erythema are predisposed to such reactions, dot hemorrhages in skin

– hemopoiesis disturbance (anemia, a leukopenia, an agranulocytosis, thrombocytopenia) is rare. Can be the first signs – fervescence, a sore throat, superficial wounds in a mouth, complaints to a grippopodobny state, bleedings from a nose and skin, prostration.

– a syndrome Stephens-Johnson, a Lyell’s disease

Diclofenac slows down aggregation of thrombocytes that demands constant control of a hemostasis from patients with disturbances of blood clotting.

– reactions of supersensitivity to diclofenac in the form of face edemas, swelling of language, swelling of a throat with narrowing of air ways, breath difficulty, up to an attack of asthma and threat of shock

– deterioration in a course of the inflammatory processes caused by an infection (for example, development of a necrotizing fascitis). It is perhaps connected with the mechanism of effect of non-steroidal anti-inflammatory drugs. Therefore if at use of Diclofenac there are symptoms of an infection or deterioration in already available infectious disease, urgent medical inspection for the purpose of detection of indications is necessary for therapy by antibiotics.

On the place of an injection: After use of injection solution, local pains, burning sensation can sometimes develop, in isolated cases also abscesses and local necroses were observed.

– hypersensitivity to diclofenac, or to other components of medicine, anesthetics

– a full or incomplete combination of bronchial asthma, the nose recuring a polypose and near-nasal bosoms and intolerance of acetylsalicylic acid or other NPVP

– a peptic ulcer of a stomach and/or intestines, round ulcers or bleedings (not less than 2 episodes), including. in the anamnesis

– gastrointestinal bleeding or a perforation in connection with use of NPVP

– disturbances of a picture of blood of not clear genesis

– cerebrovascular or other active bleeding

– the period of pregnancy and a lactation

At simultaneous use of Diklofenak-ratiopharm of an ampoule of 75 mg / 2 ml and:

– other non-steroidal anti-inflammatory drugs or glucocorticoids the risk of emergence of by-effects from digestive tract increases,

– digoxin, Phenytoinum or drugs of lithium the level of content in plasma of these medicines can increase,

– diuretics, APF inhibitors, antagonists of angiotensin II action of these means can be weakened, deterioration in function of kidneys, including an acute renal failure is possible,

– glucocorticoids – the risk of gastrointestinal ulcers or bleeding increases,

– acetylsalicylic acid decrease in level of diclofenac in blood serum is possible,

– cyclosporine, paracetamol toxic impact of the last on kidneys can increase,

– antidiabetic means can cause the necessity of increase in dosages of the last therefore at such combined treatment is necessary control of level of sugar in blood,

– somnolent medicines – easing of effect of the last,

– ethanol, colchicine, corticotropin, drugs of a St. John’s wort made a hole raises risk of developing bleedings from digestive tract,

– antibacterial medicines from group of a hinolon risk of developing spasms,

– beta-blockers – is possible the inhibiting effect on atrioventricular conductivity.

Risk of gastrointestinal bleeding, ulcer or perforation increases depending on NPVP dose, especially at patients with existence is ulcers or bleeding in the anamnesis. NPVP have to be applied with care at patients with diseases of digestive tract and/or inflammatory and ulcer diseases of digestive tract (ulcer colitis, Crohn’s disease) in the anamnesis. It is necessary to avoid use of diclofenac with other NPVP, including selection inhibitors of cyclooxygenase-2.

Due to the risk of arterial trombotichesky events (myocardial infarction, a stroke) it is necessary to carry out monitoring at patients with existence in the anamnesis of a hypertension and moderate heart failure.

during reception of NPVP are possible skin reactions (eksfoliatviny dermatitis, Stephens-Johnson’s syndrome, a Lyell’s disease) at which first signs it is necessary to stop drug use.

At the following states drug can be appointed after careful assessment of a ratio advantage/risk:

– a system lupus erythematosus and the mixed diseases of connective tissue

– bronchial asthma, allergic rhinitis, polyps mucous a nose and also chronic obstructive respiratory diseases and persistent infections of airways in connection with danger of emergence of an attack of asthma, Quincke’s edema or urticaria. Similar precautions are necessary also at patients who had allergic reactions (skin reactions, an itching, urticaria) to analgetic and anti-inflammatory drugs.

Diclofenac (as well as other NPVP) can cause a hyperpotassemia.

At prolonged use of diclofenac the regular monitoring of levels of enzymes of a liver, function of kidneys and blood test is necessary.

is not recommended to use drug during pregnancy and a lactation.

during treatment reduction of speed of mental and motor reactions is possible therefore it is necessary to refrain from control of transport and other potentially dangerous mechanisms.

Treatment: Specific antidote does not exist. In case of overdose it is necessary to cause vomiting, to appoint antacids and activated carbon. Symptomatic drug treatment.

On 2.0 ml of solution spill in ampoules of orange glass. On 5 ampoules place in a container plastic. On 1 container together with the instruction for medical use in the state and Russian languages place in a cardboard box.

To Store storage conditions at a temperature not above 25C.

not to apply a period of storage after expiry date!